I knew once summer was coming to an end that I needed to get to work on a new jacket - my old one only just made it through last autumn/winter, and I wanted to try to make a replacement so I started looking around for inspiration. I was almost set to make a winter version of the Anise jacket, but then within a couple of days of each other I spotted the Schnittchen Malu and some lovely coating fabric that I seemed like a brilliant match for the pattern, so I took it as a sign that they were meant to go together and here's the result... 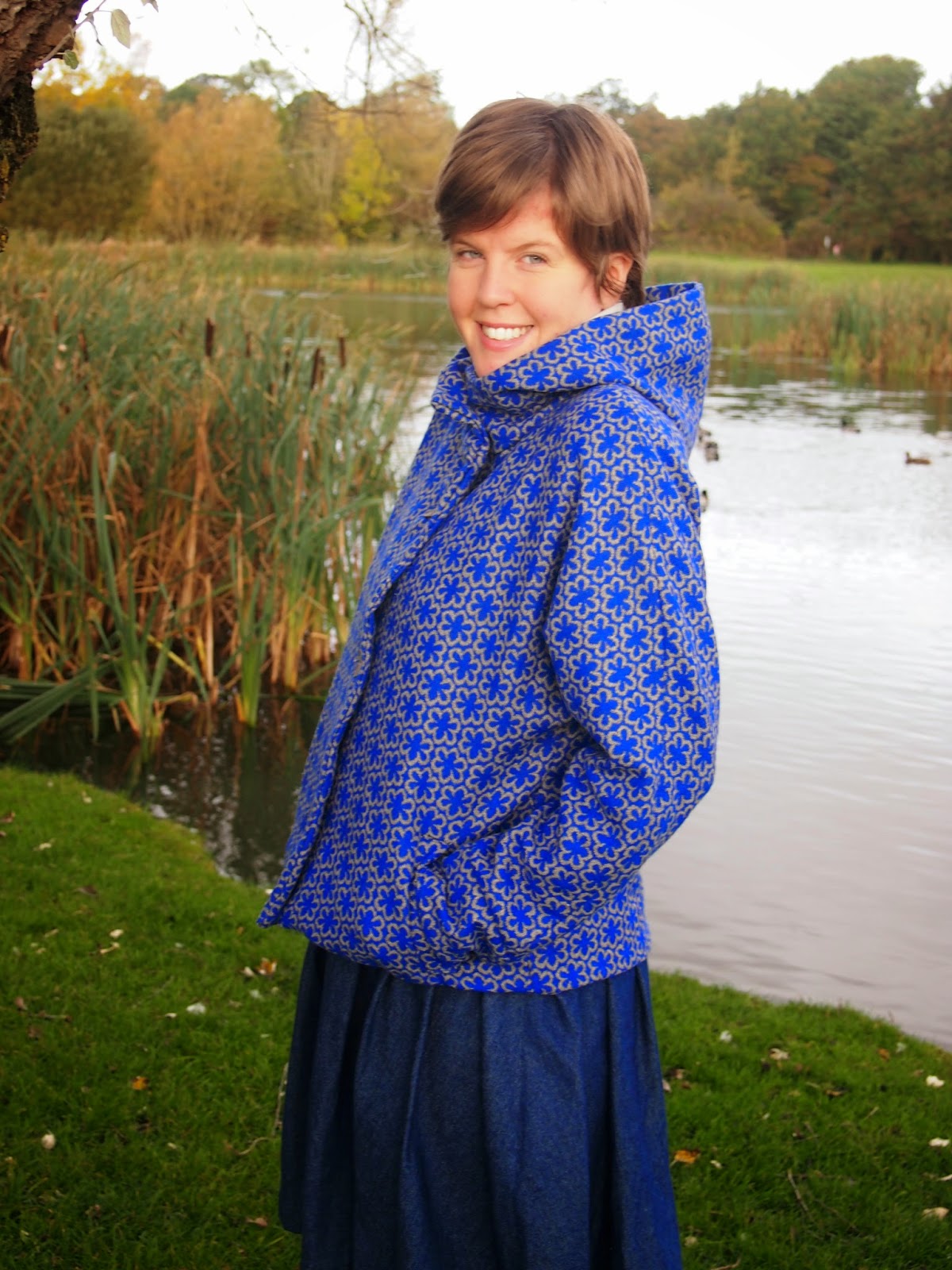 The Malu is a fully-lined coat or jacket (I made the shorter jacket version) with kimono sleeves and welt pockets, and the options of either a collar or hood, and zip or buttons (obviously I went for the hood and buttons), so there are plenty of variations to choose from.

The pattern is also designed to have hem bands, but when I made up my toile the extra length that the hem bands added made the jacket a bit of a strange length on me, so I left the hem bands off, which gave me a jacket just the length I wanted.

As I was going to leave the hem bands off, sewing the rest of the pattern as drafted would have meant that the lining might have ended up visible around the hem, so I shortened the lining pieces slightly and drafted hem facings to make sure the lining stays hidden away. 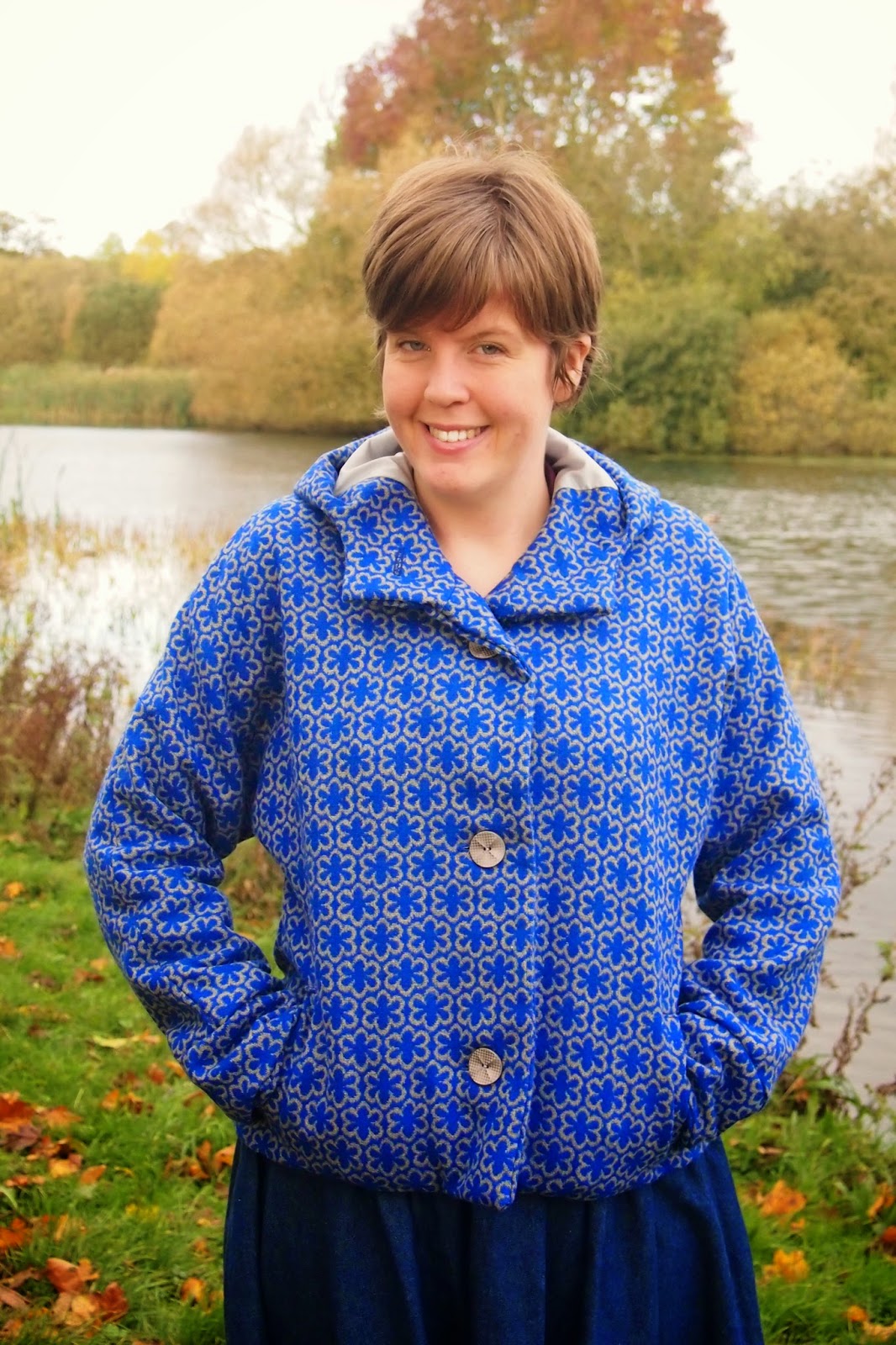 I was surprised by how quickly the jacket came together, but then I realised that I'd been basing my expectations on my experience making my Anise jacket, whereas this is a much simpler pattern. The fit is quite relaxed, so there are no darts or princess seams. The kimono sleeves also mean that there are no sleeves to set in, and finally the lining is bagged and turned through a small hole in the arm seam, so there's not a lot of hand stitching involved (I do quite like a bit of hand stitching, but there's no denying that it does take longer!). I did take my time with the welt pockets to make sure that they turned out nicely, but then I managed to sew up almost all of the rest of the jacket on a Sunday afternoon (and it would have been even quicker if I hadn't had an incident with a broken needle colliding with my finger!). 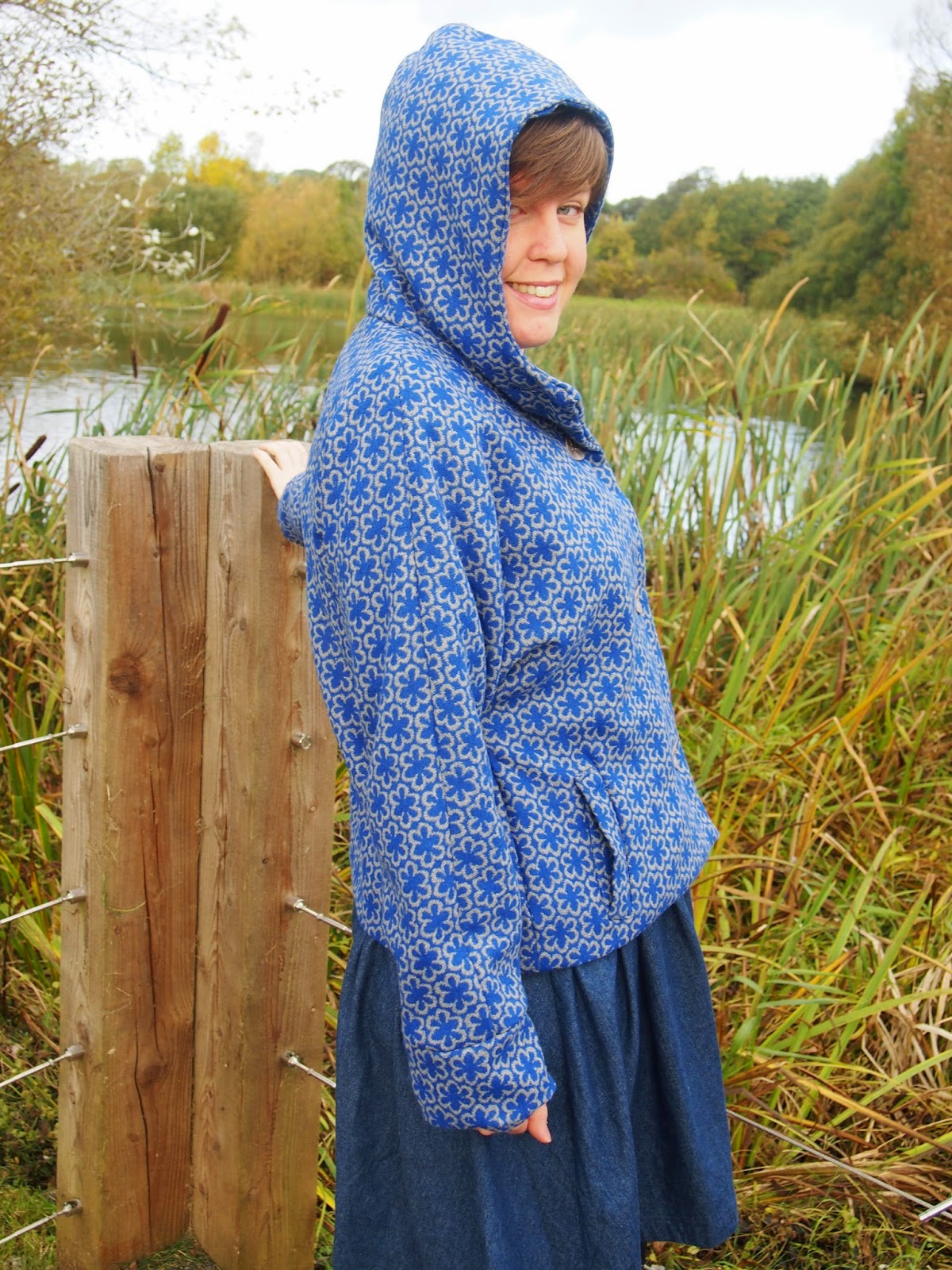 The instructions were fairly easy to follow, although they are just written instructions without any diagrams to illustrate the steps which might not be great if you like to see things visually instead of doing lots of reading. There is a tutorial online with photos though, so that definitely helps (it's in German, but even if you didn't speak German I think it would be pretty easy to work out which photo goes with which step).

I had the instructions in English and German, which was interesting for me because I work as a German-English translator so it gave my inner language geek and sewing nerd the opportunity to work together for a change! In general, the translation was fine and it all made sense, although there were odd little things like using "sewing allowance" instead of "seam allowance" which were a bit strange. That's me being a picky translator though, it probably wouldn't bother a normal person! 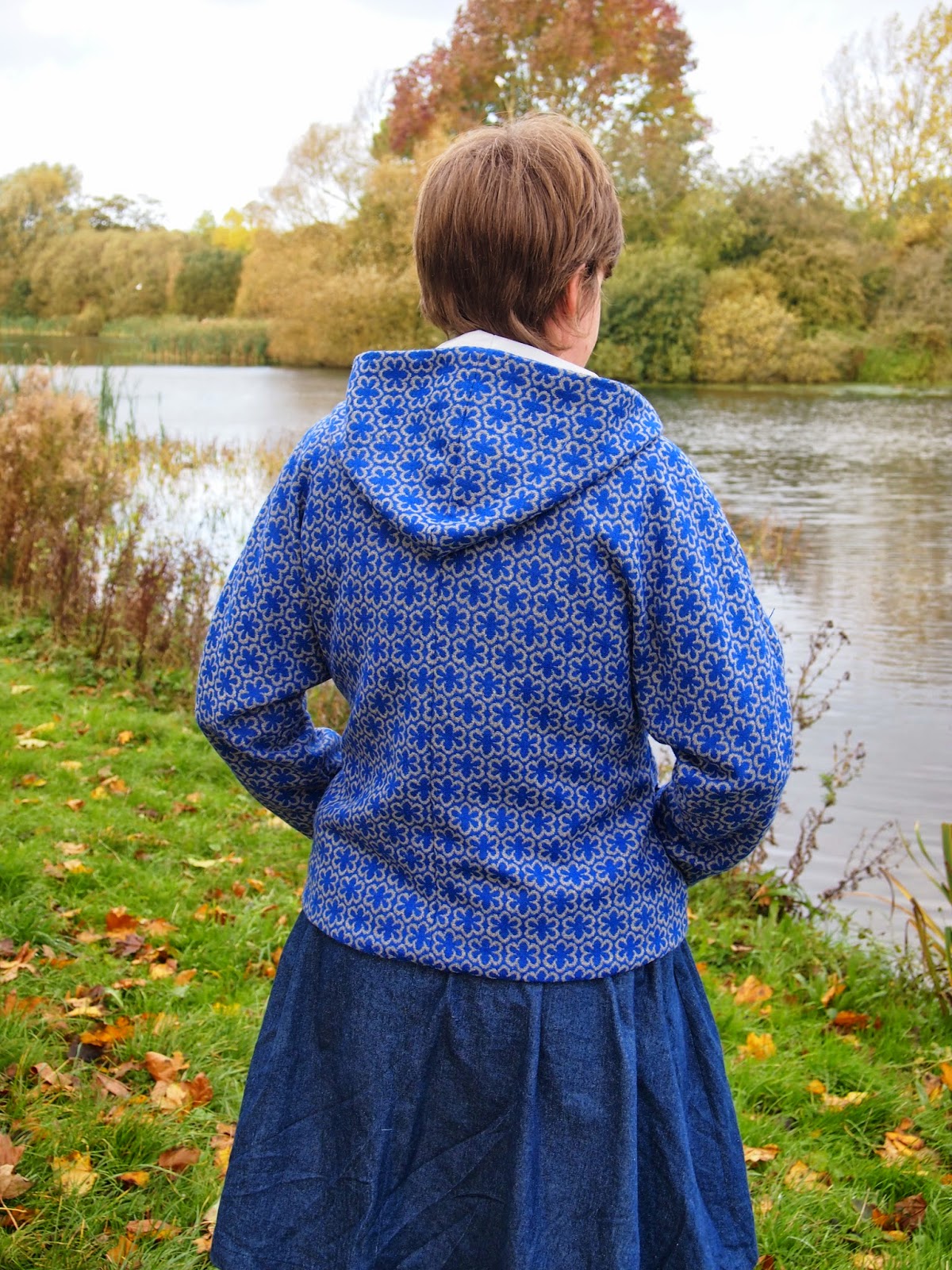 The fabric is a poly/viscose/wool blend coating from Guthrie & Ghani. I fell slightly in love with it as soon as I saw it online and it didn't disappoint in real life! It's a nice weight for autumn, and it's a lovely shade of blue (it's also actually reversible, and the blue flowers on a grey background look great too, if that's more your style), and I like the fact that the pattern makes it a bit different from normal coats. I thought it would be a good match for the Malu because the lack of darts and everything means that the flower pattern doesn't get broken up too much.

I did attempt some pattern matching down the centre back seam, but that failed spectacularly - obviously my brain wasn't working properly when I was cutting out my fabric. I got a bit annoyed with myself when I realised it didn't match, but then I told myself that nobody who doesn't sew would ever even think twice about the fact that the pattern doesn't quite match down the back of my jacket so it doesn't matter too much. I succeeded in making sure the lines of flowers matched up across the front, so that's something at least! 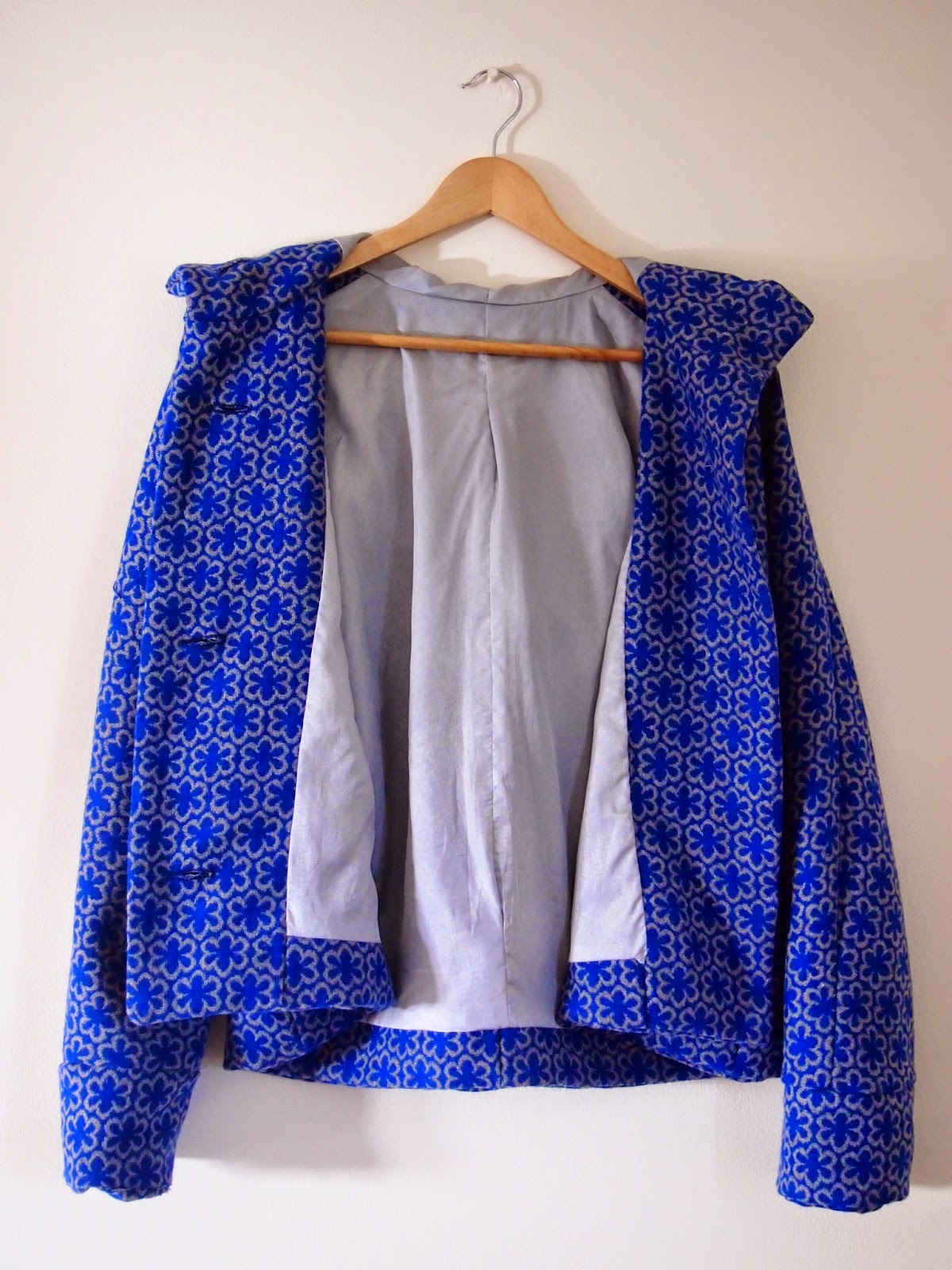 For the lining, I used some "superior lining" from Truro Fabrics in silver. It's an acetate and polyamide mix, and it is a lot more expensive than a standard poly lining, but it's breathable, really soft and feels so much nicer so I definitely think it was worth the extra that I paid for it. I wouldn't necessarily start using it to line all of my garments - skirts that I've lined with normal poly lining have seemed fine to me, but I think it's worth paying that bit extra for more special (and hopefully long-lasting!) projects.

I wasn't sure what to do about pre-treating the coating fabric, but in the end I did what the Colette Anise Companion refers to as the "London shrink" - you wash a bed sheet and then lay out the damp sheet and roll the fabric up inside it, then leave it overnight, before unwrapping and leaving to dry completely. I'm not really sure if that's the right thing to do, but I feel better that I've pre-treated it in some way at least! 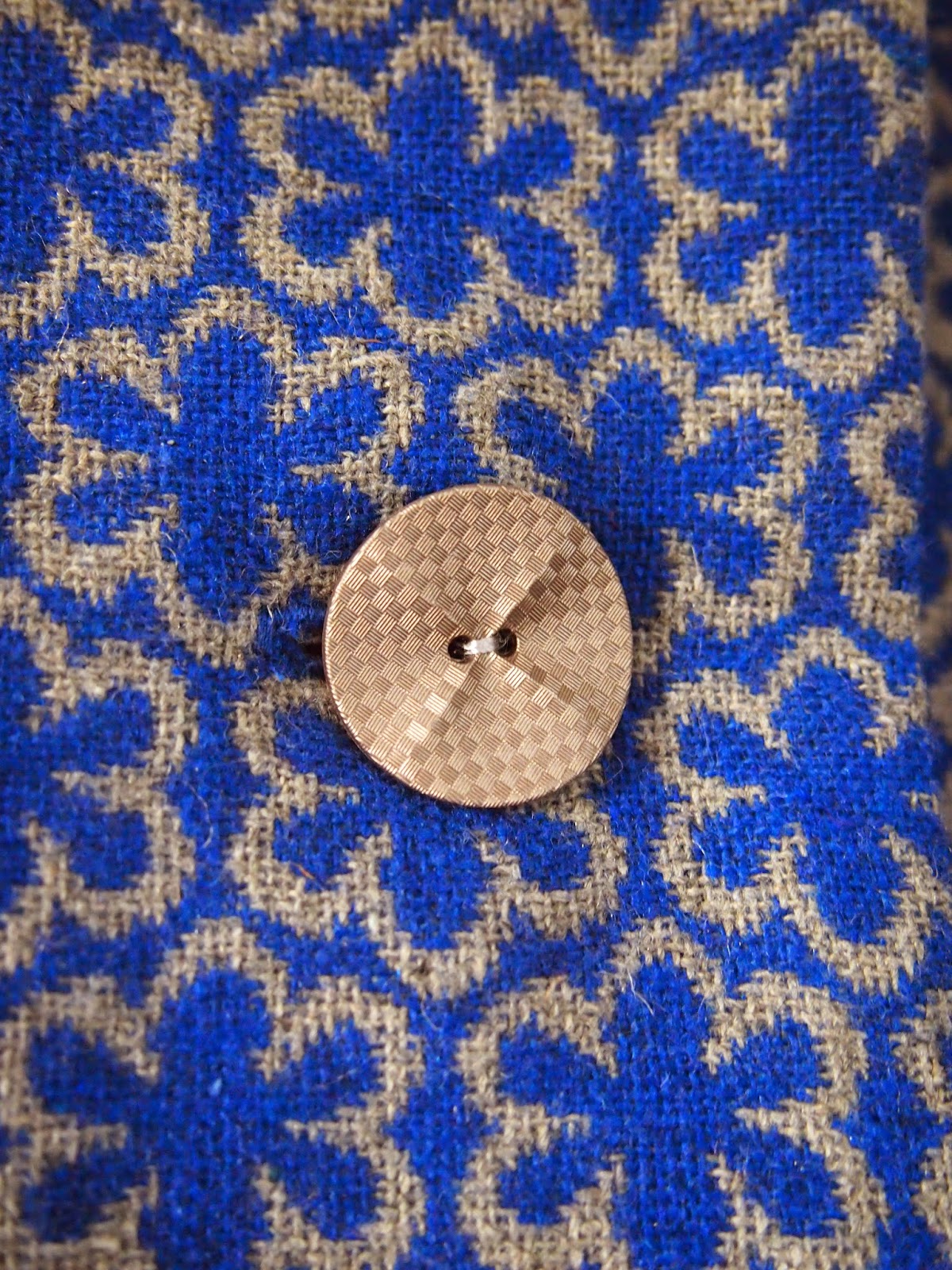 It took me a while to decide what buttons I wanted to use - I initially had it in my head that it would be good to use some self-cover buttons, but the print was the wrong size for that to work well, then I wanted matching blue, but eventually I found these grey ones in a local wool shop. I really like the fact that they're a bit different but without distracting from the main fabric, if that makes any sense?!

I don't think I'll be rushing to make another Malu, but that's mainly because I can't justify having multiple versions of the same coat in the same way that I can with dresses! As I mentioned before though, the Malu does have a couple of options to choose from so you could make versions that were a bit different. I'm kind of tempted to try an unlined version of the longer coat in fleece and use it more like a long cardigan than a coat, but it's just an idea that's floating around in my head at the moment - it may not go anywhere. 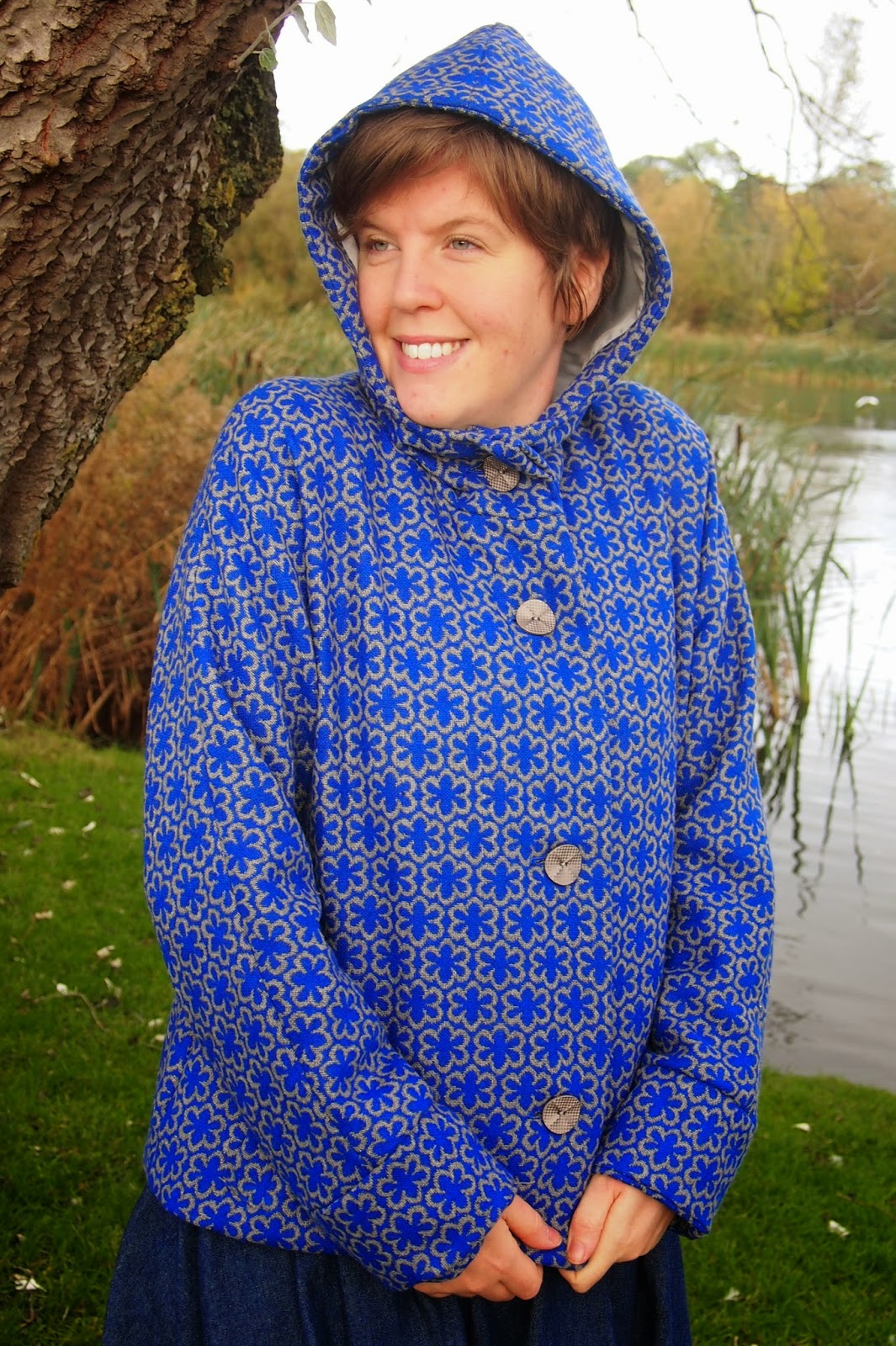 Overall, I'm really happy with how this turned out, and it's the perfect weight for this time of year. The Malu is a nice pattern, and I think it would be a good option to choose if you fancy having a go at making a coat or jacket, but aren't quite ready to commit to lots of tailoring or a more complicated pattern (as long as you're OK with the lack of diagrams in the instructions). Has anybody else been sewing a coat or jacket recently?
Posted by Ruth - Nightingale and Dolittle at 12:32