Mortmain dress & an ode to chambray

I mentioned in my post about my denim Lilou that using the remains of my first Mortmain dress for the lining had reminded me that I should make another version of this pattern. I'm not sure why it's taken me so long to be honest as I really like my first version and I had definite plans for making a sleeveless version this summer but they never quite became reality, but I've now got a second sleeved version at least - better late than never! 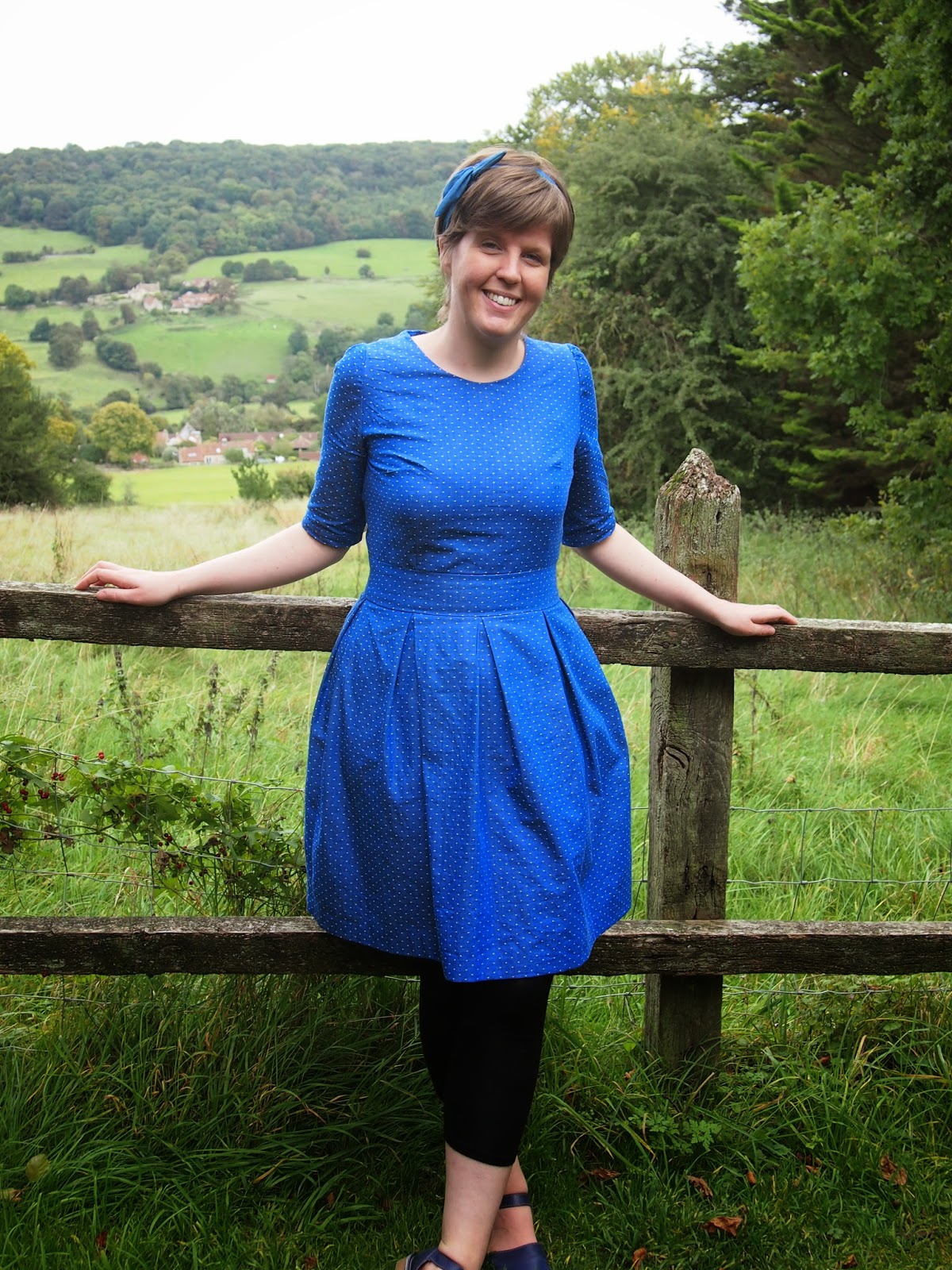 There are a couple of differences between this version and my first one. Firstly, I decided to reverse the pleats in the skirt - this is one of the suggestions included in the pattern instructions and there's also a really helpful tutorial on the Gather website if you're not familiar with sewing pleats. I'm pleased that I reversed the pleats on this one, in some ways it's a small change but I think it makes a surprisingly big difference to how the dress looks and, much though I like Mortmain no. 1, I think I prefer the pleats in this one. 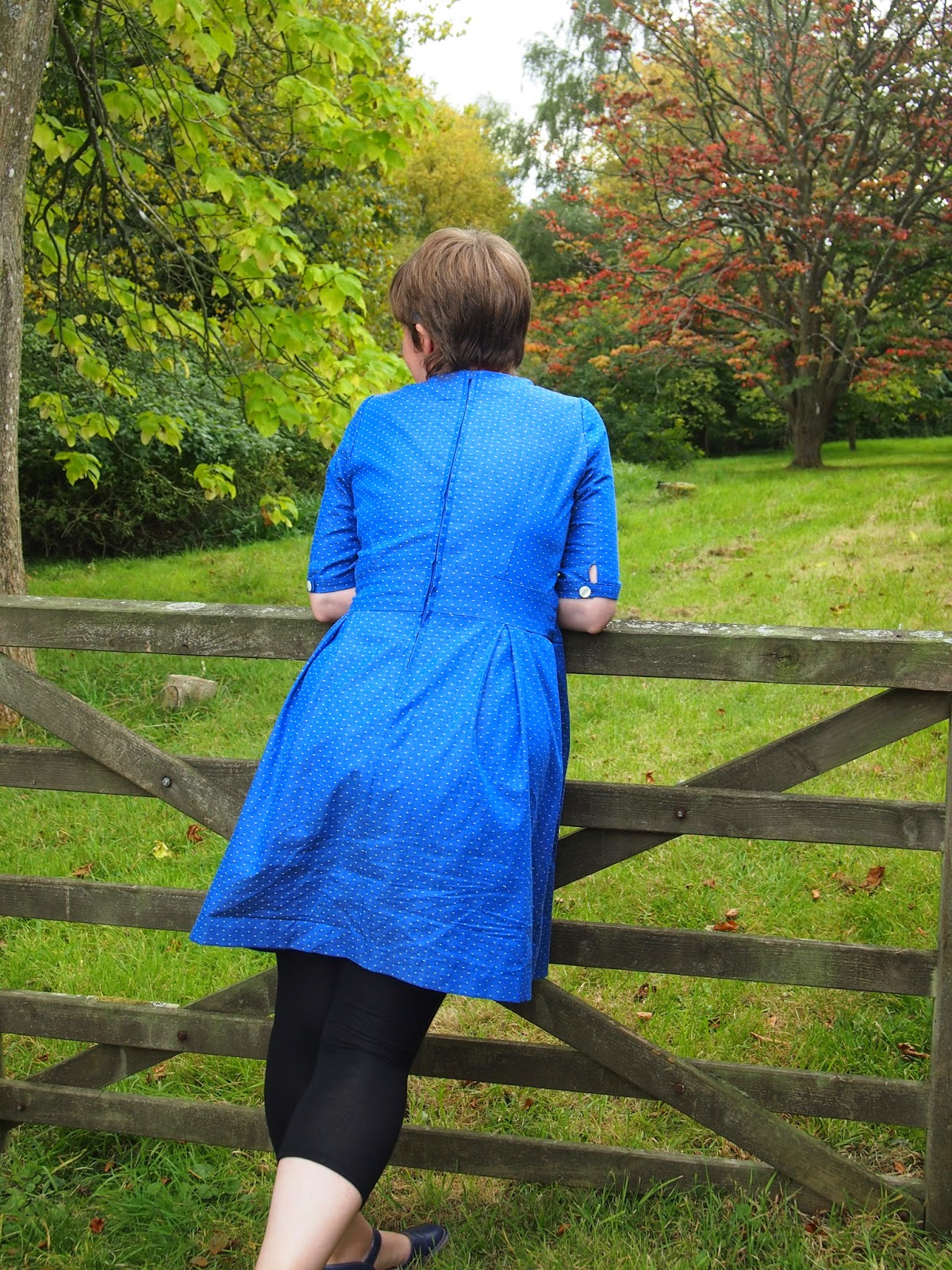 I also used a regular centred zip this time instead of using an exposed zip as the pattern suggests. I quite like the exposed zip on my first version because it's a bit of a contrast with the extreme girliness of the rest of the dress, but as a general rule I'm not a massive fan of exposed zips. Plus, in places where I've seen them for sale anyway, they cost about five times as much as regular zips! 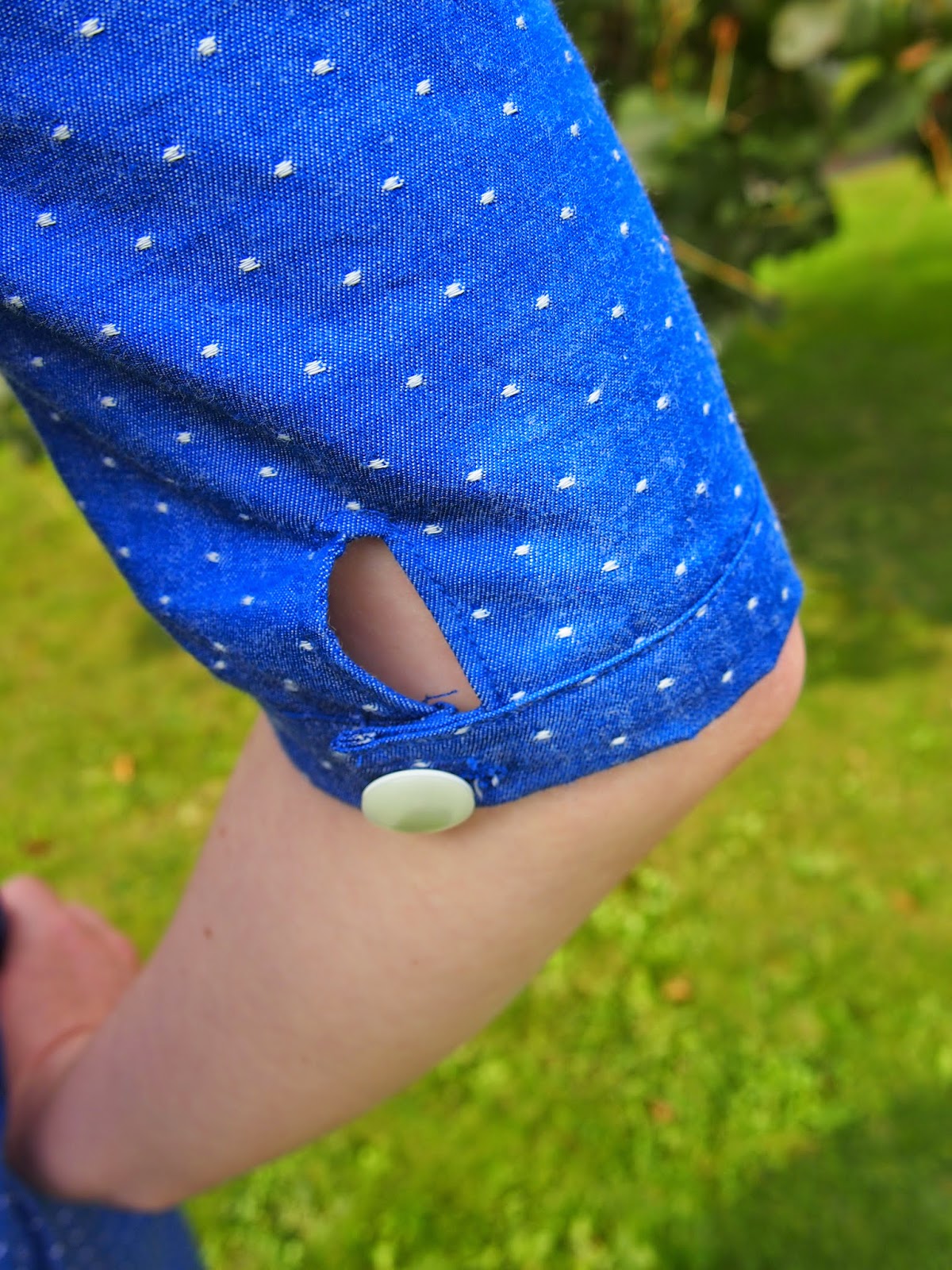 My first version uses ribbon ties on the sleeves, and I really do love this feature, but it's not massively practical for wearing under cardigans, so this time I used buttons on the sleeve cuffs instead. The pattern has instructions for adding a small elastic loop to one end of the cuff to secure the button, but I found that I had enough space in the cuff to sew in a buttonhole, and I thought that would be more secure, so that's what I did. 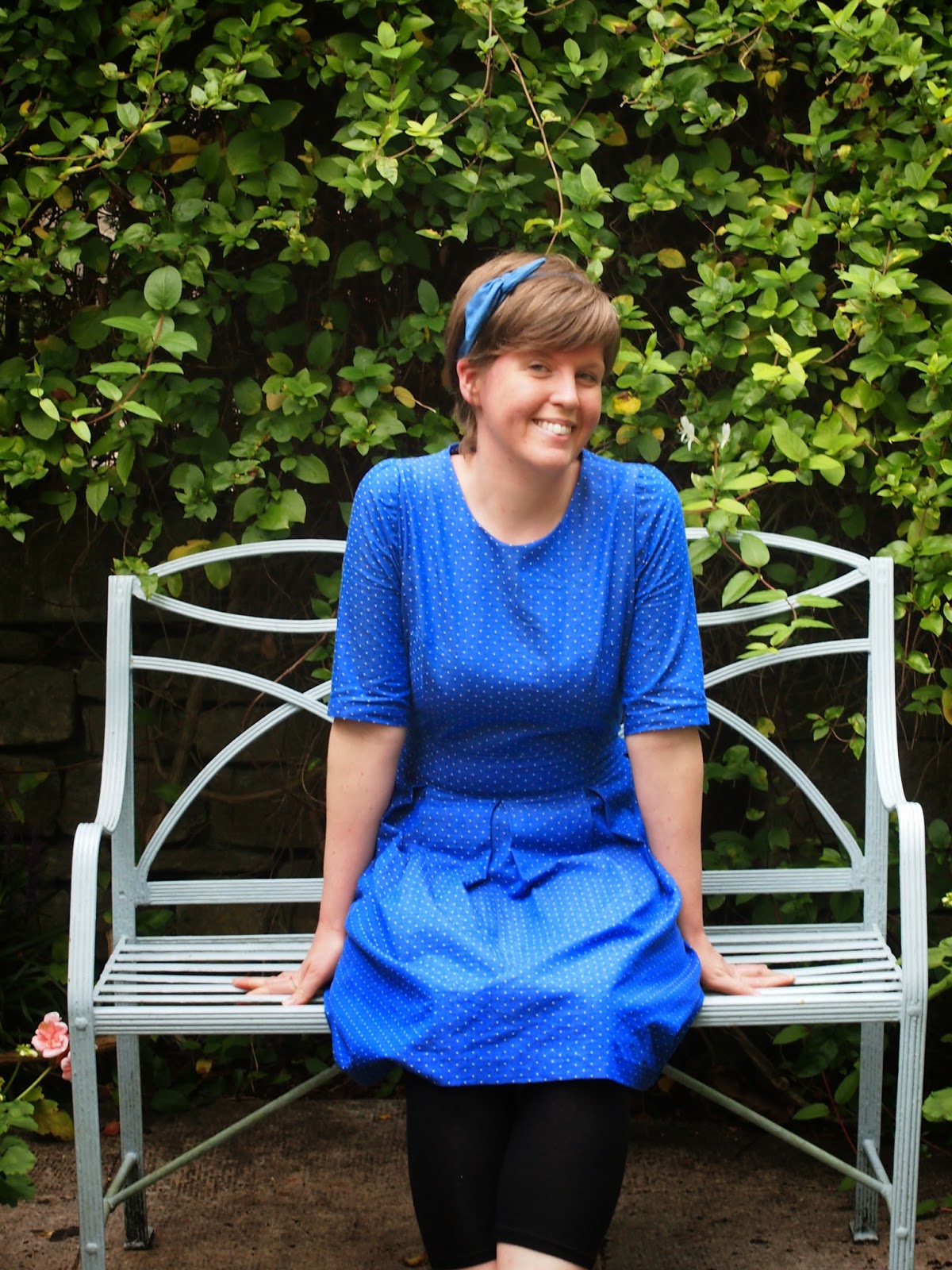 OK, so the material. It's a gorgeous dot chambray by Robert Kaufmann that I got from Dragonfly Fabrics and I LOVE it. As you may have guessed from the title of this post, if I had any poetic talent I might even be inclined to start writing sonnets about it, that's how much I love it. The only thing I don't love about it is that it seems to be some kind of shy wallflower and doesn't want to show off how lovely it is to you because it doesn't photograph brilliantly so you might not appreciate it in all its glory, but trust me that the glory is there. I do love spots and dots, so that definitely helps, but aside from that the colour is gorgeous, it was lovely to sew and it feels so nice to wear. I'm seriously tempted to get some of the indigo for another dress. And as a bonus, the material came so beautifully wrapped that it felt like Christmas had come early!

Sorry if I sound like I'm going a bit over the top there, I possibly may be getting a bit carried away with myself, but it really is lovely fabric. I've also become aware recently that the difference between me just liking a finished garment or really loving it tends to be the fabric that I've used, and not so much the obvious aspects like the colour or the print, but the the quality of the fabric, the way it sews up and how it feels to wear. Does anyone else find that? It's not a particularly earth-shattering realisation, and probably one that that I have been a bit slow to arrive at, but I'm glad I got there all the same. 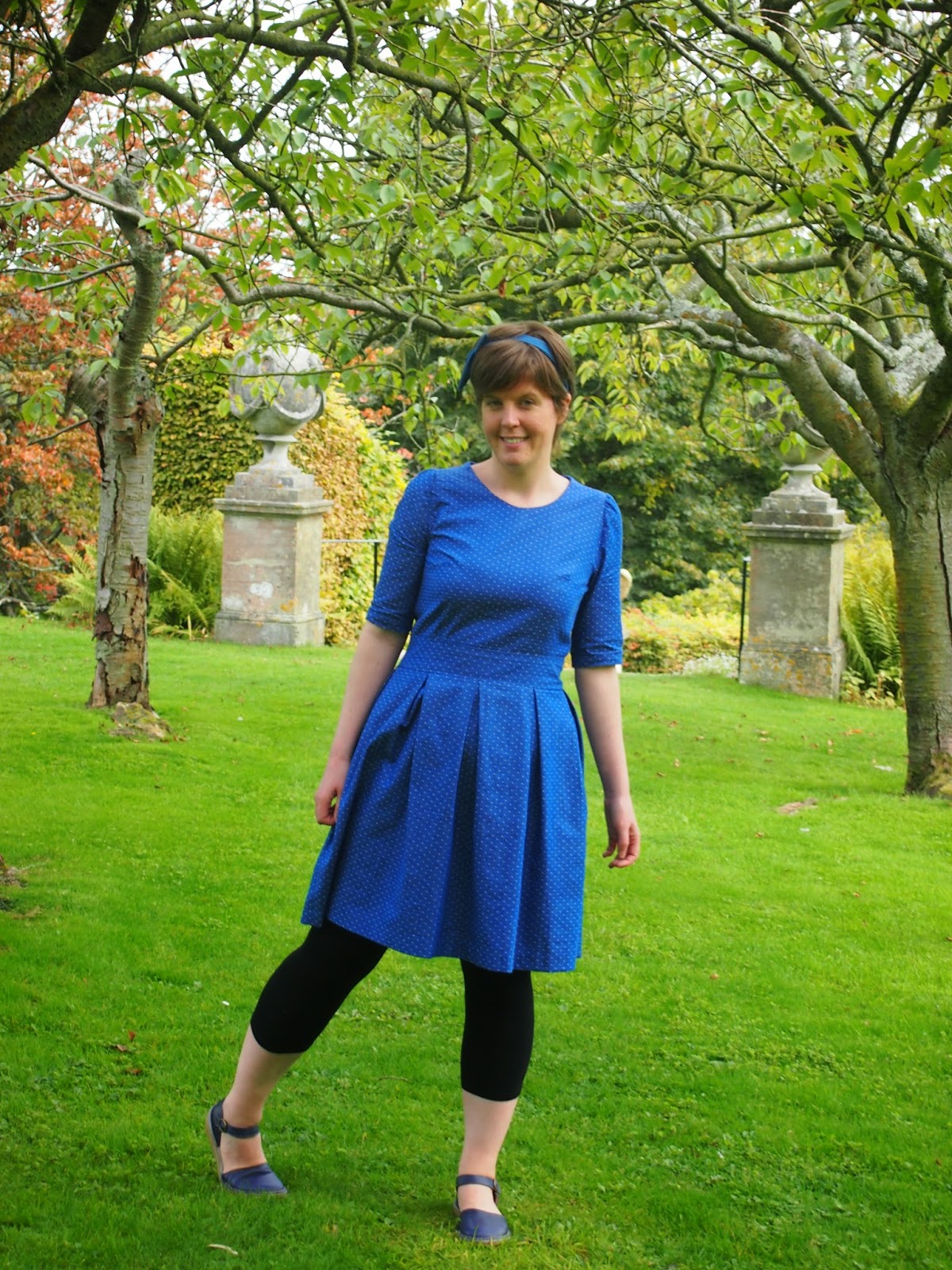 On a not-particularly-related subject, the photos for this post were taken in the grounds of the American Museum in Bath. My Mum and I popped over there last Saturday mainly because they have a Kaffe Fassett exhibition on at the moment, which was so inspiring. It's on until 2 November, so if you're in the area and you're a fan of colour I'd definitely recommend it. The only problem was that I came away from it wanting to buy huge amounts of rainbow-coloured material and yarn to make massive quilts and blankets to brighten up my flat (which is rented, therefore entirely painted in magnolia). I'd always been intimidated about quilting, and not really sure if I wanted to give it a go, but after seeing some of his work, I definitely feel like I should try it some time. I'm still slightly intimidated by the idea though! Any tips on how to get started? 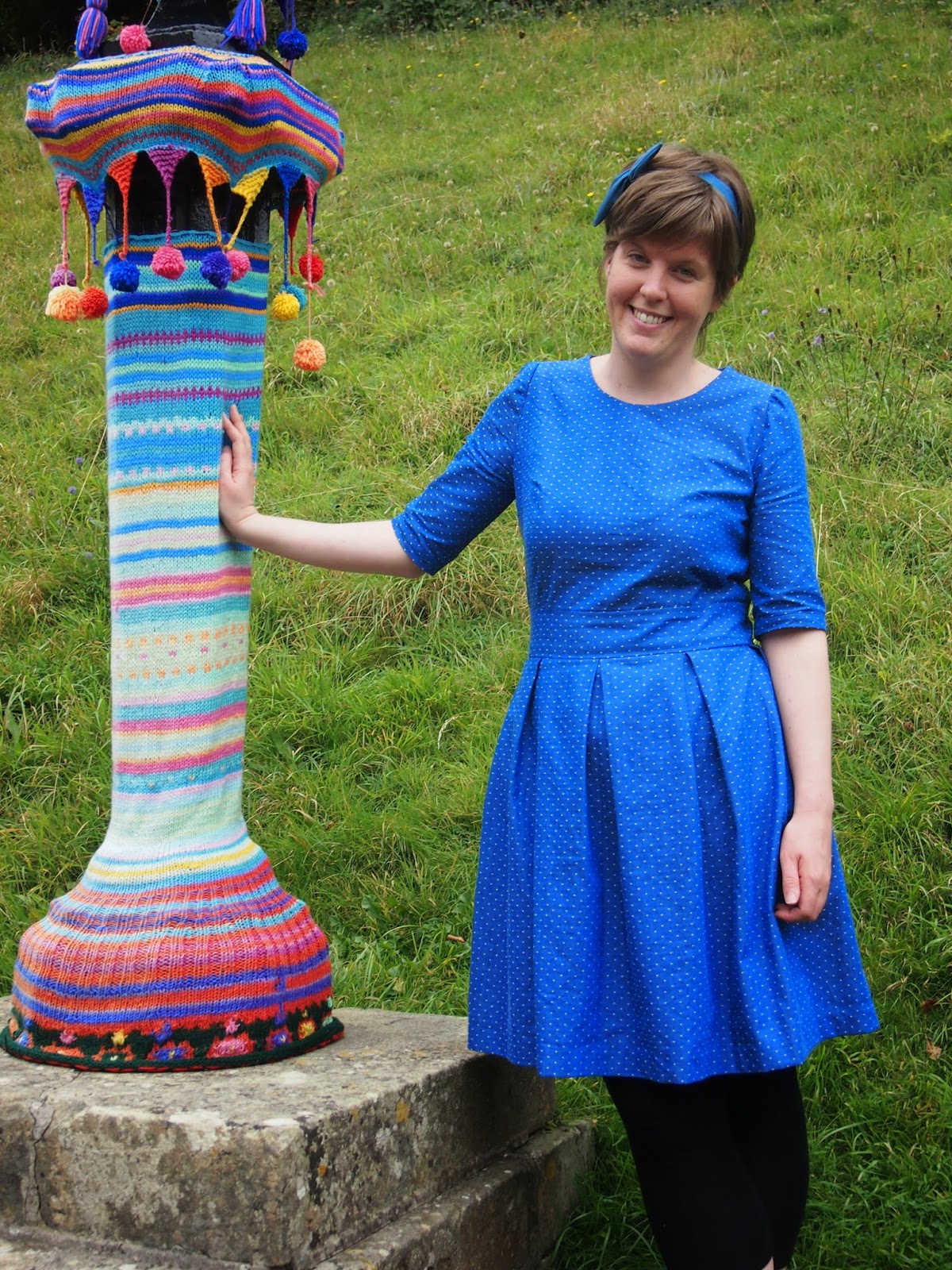 Even once the Kaffe Fassett exhibition is over, the museum would still be worth a visit if you're interested in quilting at all, because they have a lovely collection of quilts and textiles. Plus, as you can see from these photos, the grounds are beautiful. Although I don't think there'll always be yarn-bombed lampposts to greet you, I think they're in honour of the exhibition! 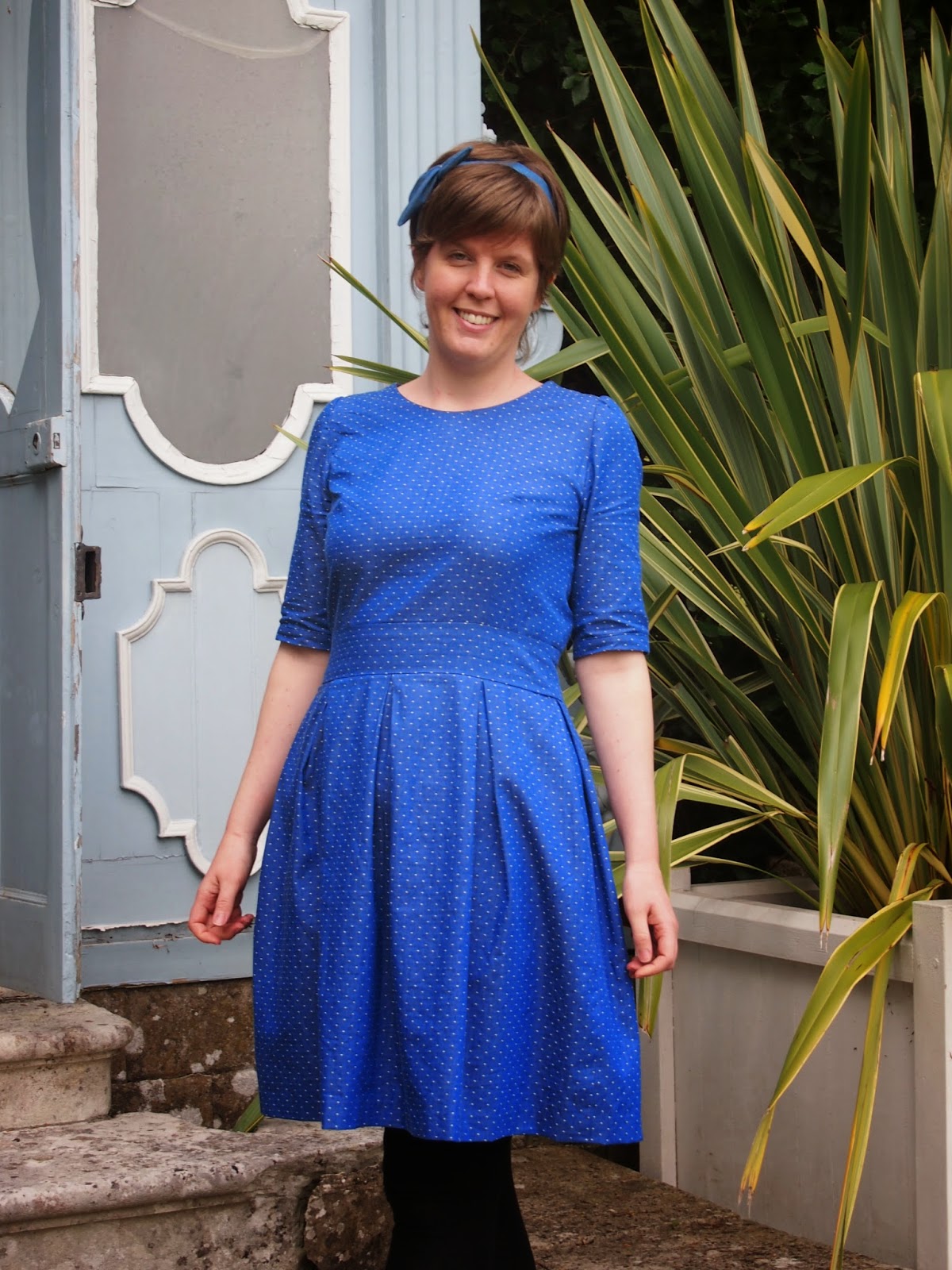 To cut a long story short, I love this dress and I had a great day wearing it for its first outing. I still really like the idea of a colour-blocked Mortmain, so number 3 may be appearing at some point this autumn/winter. And there will probably have to be some more dot chambray in my life - it's OK to use the same fabric multiple times, isn't it?!
Posted by Ruth - Nightingale and Dolittle at 13:28