If I really like a finished garment, it's fairly common for me to then dream up an infinite number of different versions in my head that I could possibly create. Most of these don't happen because I don't have endless amounts of time on my hands, or enough money to be able to afford all the fabric that I'd need, but sometimes the perfect fabric is just sitting there already patiently waiting to be used, and that's just what happened for this project, my second version of the Capital Chic Bellini blouse! 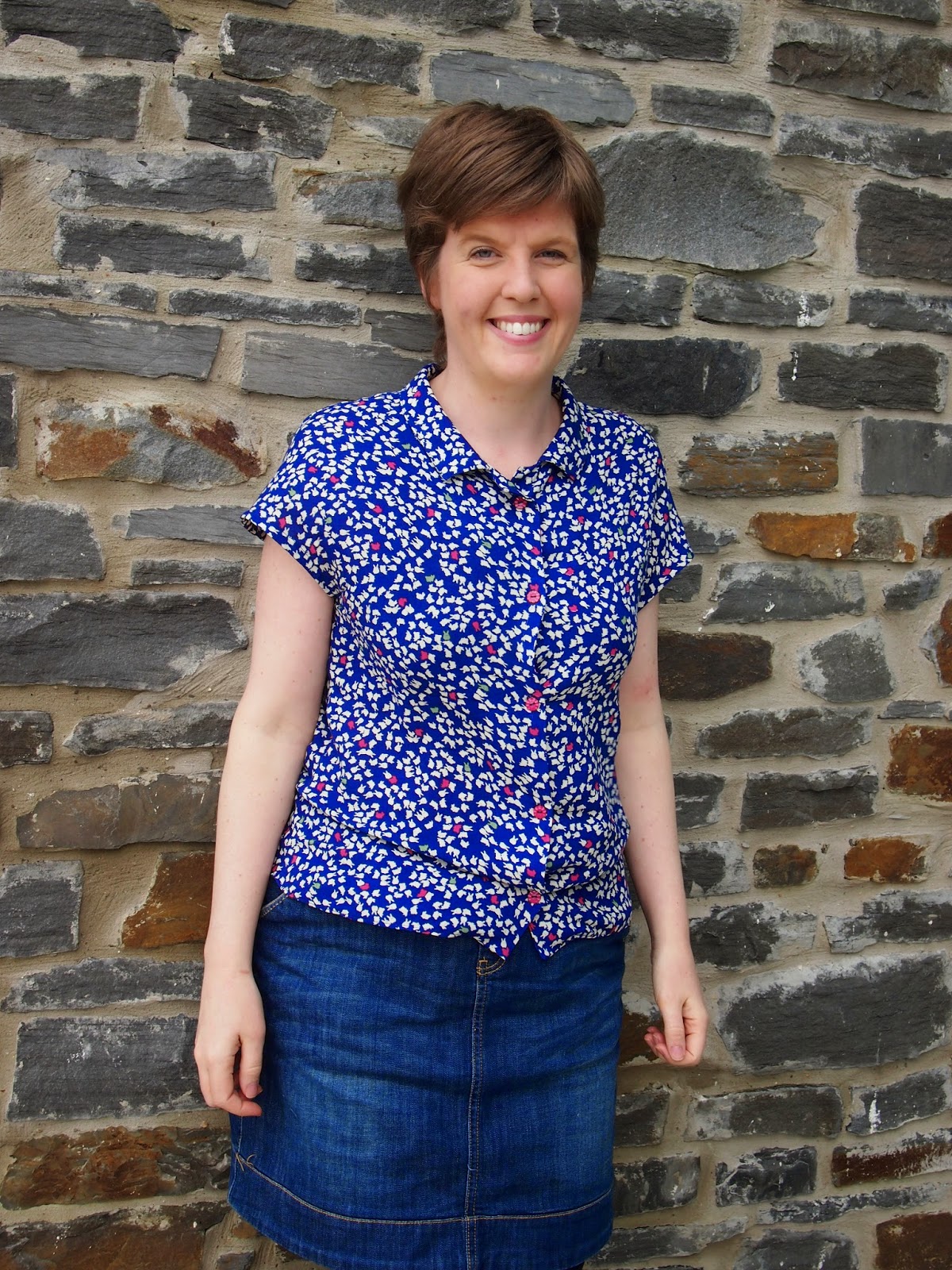 I quite like making second (or third, or forth....) versions of a pattern. I know some people might prefer to always use different patterns so you're potentially using new skills and not just doing the same thing, but the way I see it, a second version of a pattern means that you don't have to worry about muslins and possible fitting issues, and you can just get on with the fun of sewing - always a good thing as far as I'm concerned. Plus you can be fairly confident that you're going to like the end result if you liked your first one. I also figure it's fine to have multiple versions of the same pattern as long as they're all a little bit different and you're going to wear all of them. And that's definitely true in this case! 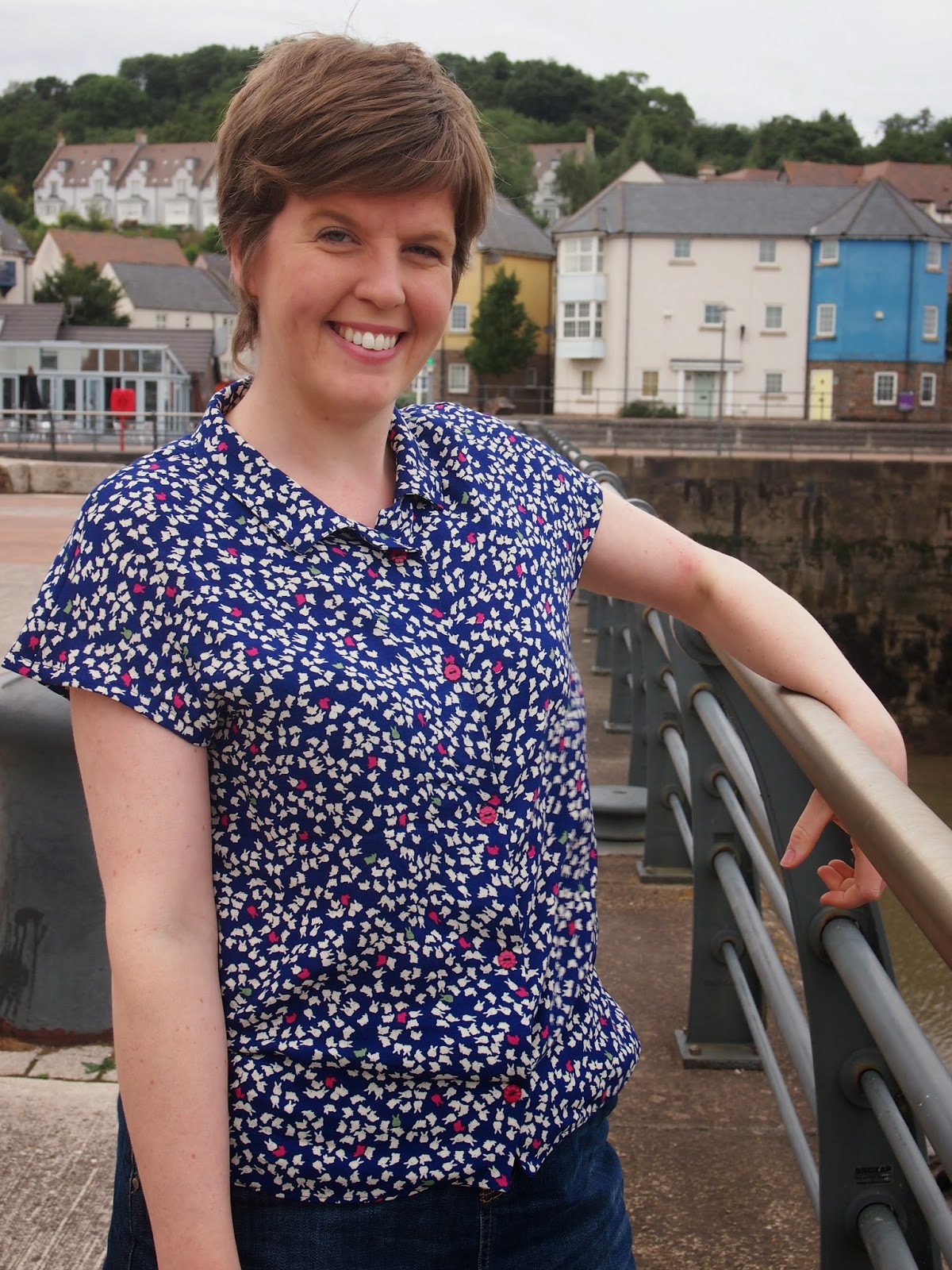 In some ways, there are similarities between my two Bellinis; they're both made of fabric with a small-scale print on a blue background (albeit different shades of blue), but they feel very different. I made my first Bellini using a nice crisp cotton, whereas the fabric for this version is viscose, which has much more drape to it so feels very different to wear. Plus the prints are different - this one may look like slightly odd blobs from a distance, but look at it up close.... 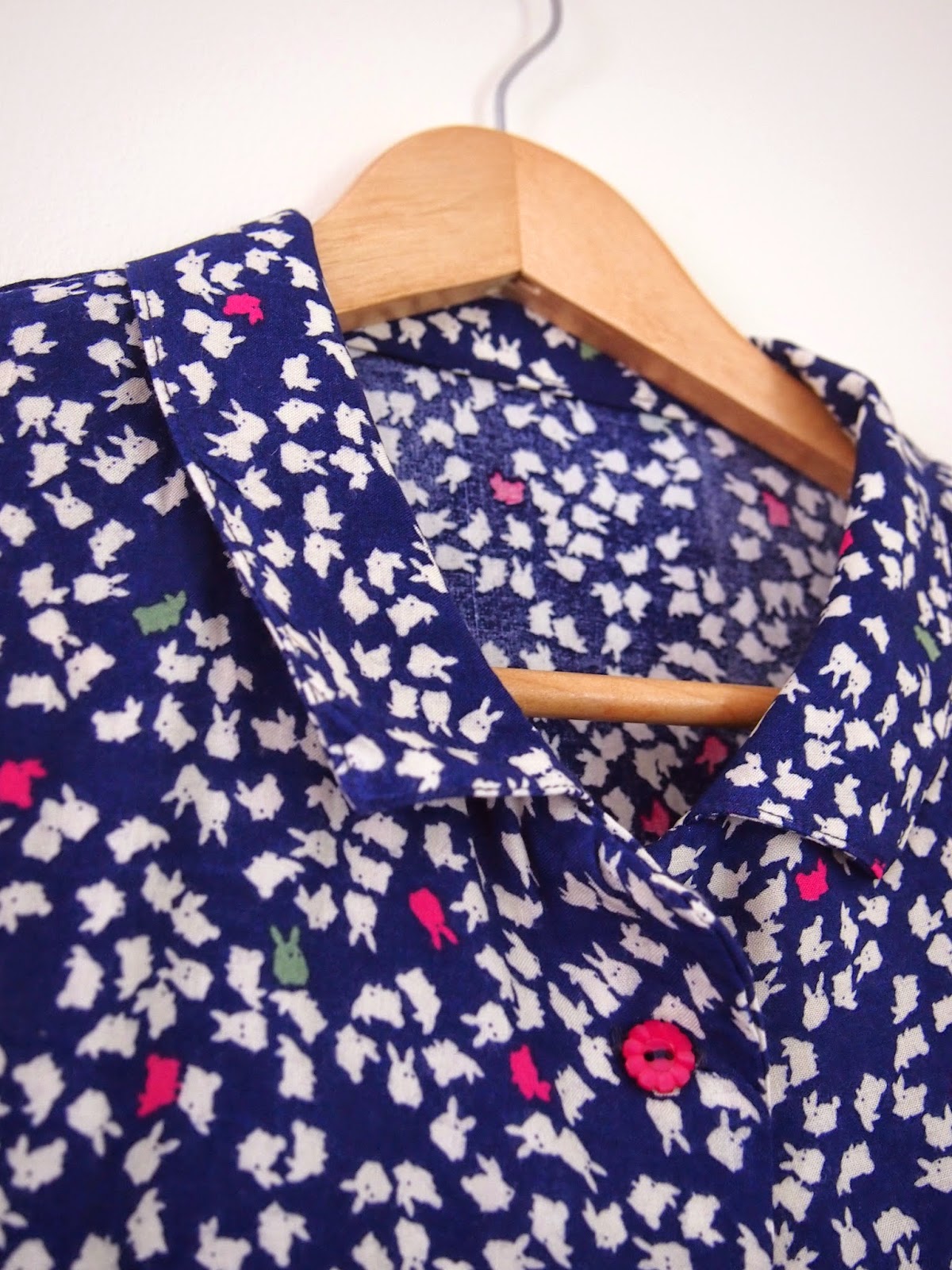 ....and you see it's actually BUNNIES! Yes, I have a whole herd (is that the right collective noun?!) of rabbits jumping about all over my blouse. It's probably meant for children, but I like it so it's all good. I bought it from Fabric Rehab, at the same time as I bought the fabric for my Cambie and first Lilou - that was a good fabric haul!

I used the same buttons as I did for my first Bellini, but this time in pink to match the pink bunnies. I realised that I actually also used the same buttons in blue on my Sureau dress last autumn! Obviously I like little flower buttons, and the people that make them have a strange ability to produce them in exactly the right colours to match my fabrics. 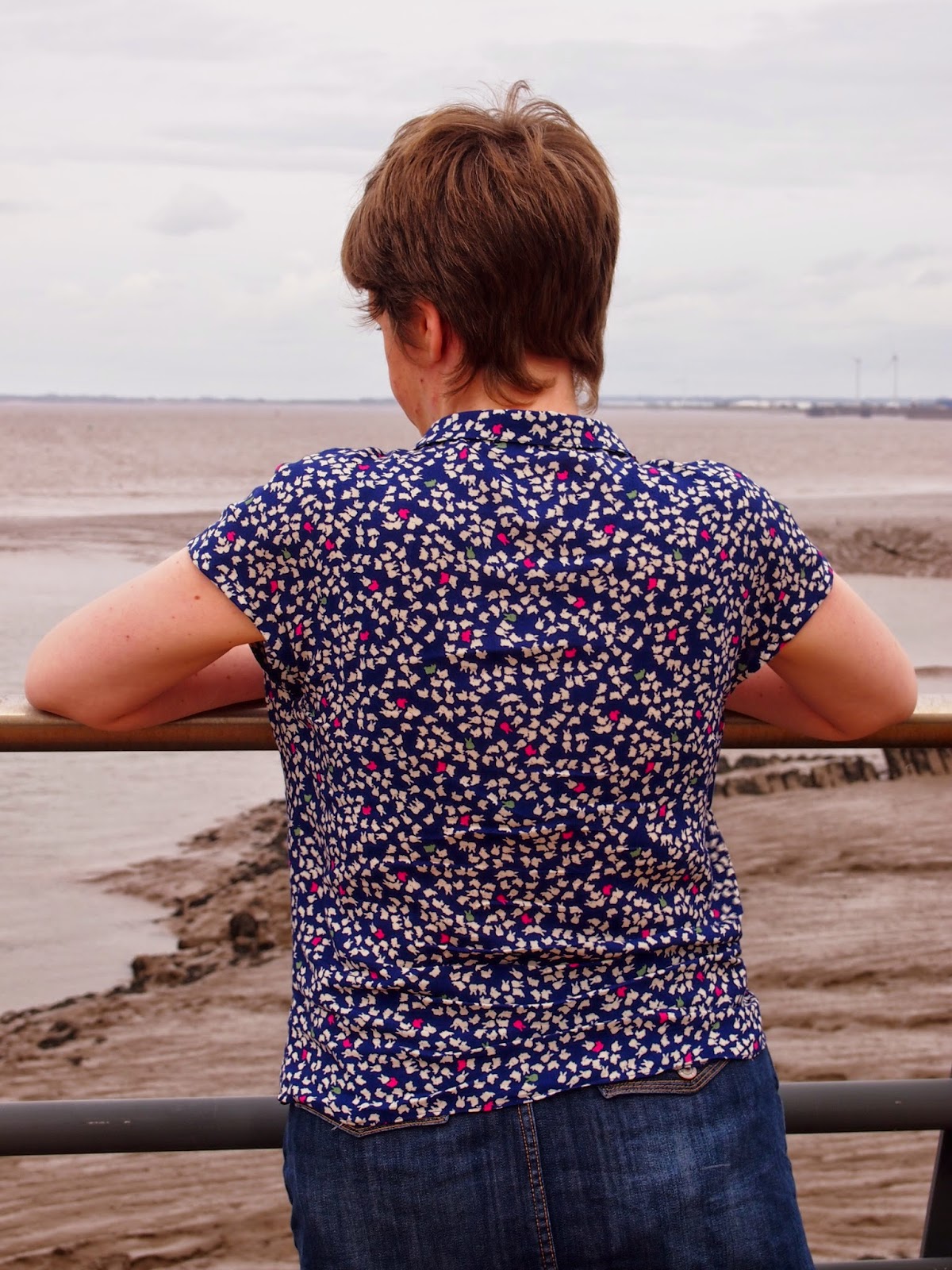 In terms of the pattern itself, I stand by everything I said in my post about my first Bellini - the instructions are nice and clear and I really like the finish of the blouse, it's all so neat and tidy and professional-looking. This one was slightly less of a joy to sew than my first one, but that's entirely down to the viscose not behaving as nicely as the cotton did. It didn't slip about too much though and was totally manageable, just not quite as cooperative as cotton!

I possibly like this one slightly less than my first one too. That's not to say that I don't like it, I definitely do, but the way that the viscose hangs means that I can sometimes get a bit of gaping between the buttons if I'm not standing quite right, which doesn't happen with my cotton one. It's a minor problem though, and I should probably just use it as an incentive to have better posture - it definitely won't stop me wearing the blouse anyway. 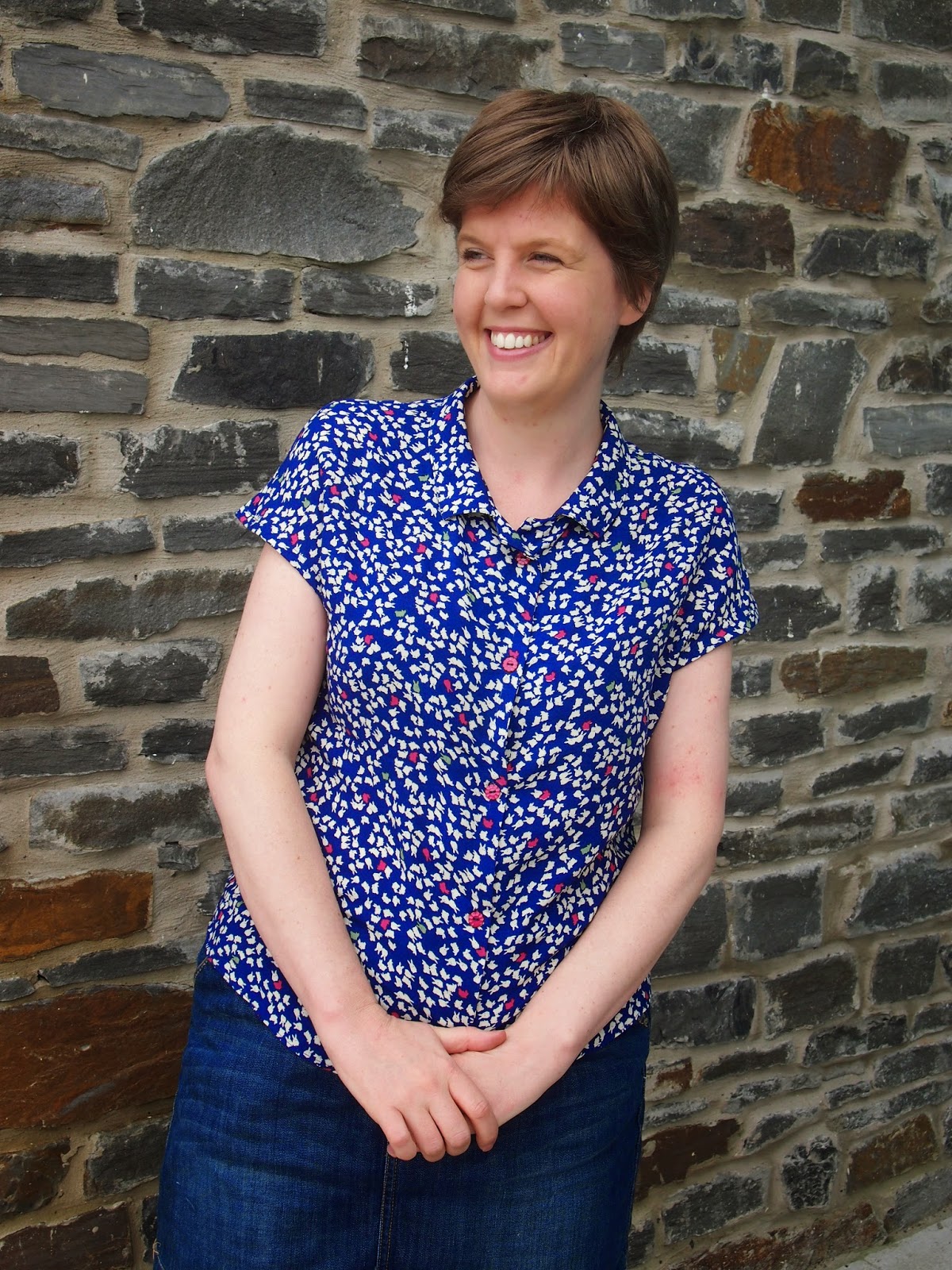 So there we go, that's my second Bellini for you! I'd like to try another version with the scalloped collar, or possibly some collar embellishments at some point, but it might have to wait for a while because I've got so many other ideas buzzing round my head at the moment! Do you like making multiple versions of the same pattern too?
Posted by Ruth - Nightingale and Dolittle at 17:28