It may not be quite autumn yet, but I thought it was time to get thinking about sewing some clothes that can be worn at the moment, but will also still work once summer has definitely come to an end, instead of disappearing for a few days and then returning again as it seems to be at the moment. My Love At First Stitch Lilou dresses have been definite favourites this summer, so I decided to make another version that I could layer up and wear as the weather gets colder. Here's what I came up with... 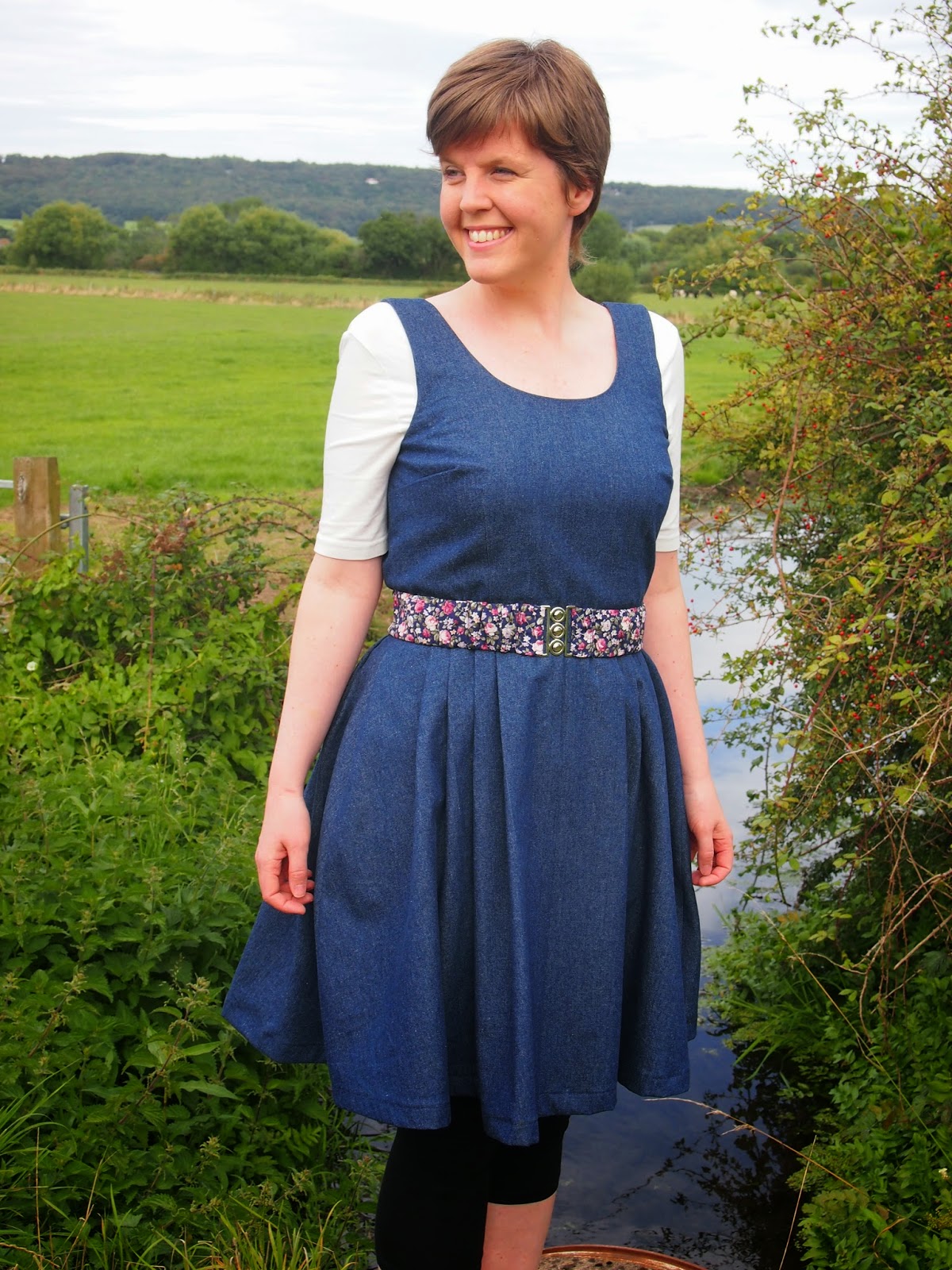 Denim might not be an instantly obvious choice for a dress, but this is soft-washed denim (from Fabric Godmother) and it feels lovely and hangs really nicely. It also holds the pleats in the Lilou skirt well - you can see those pleats much better in this plain fabric than you can in my other Lilous where the pleats get a bit lost in the prints. The other advantage of denim is that it'll go with pretty much anything in my wardrobe. Also, as I don't really wear trousers, denim skirts play the same role for me as jeans do for many people, and I think this Lilou will get worn just as much as my denim skirts do. 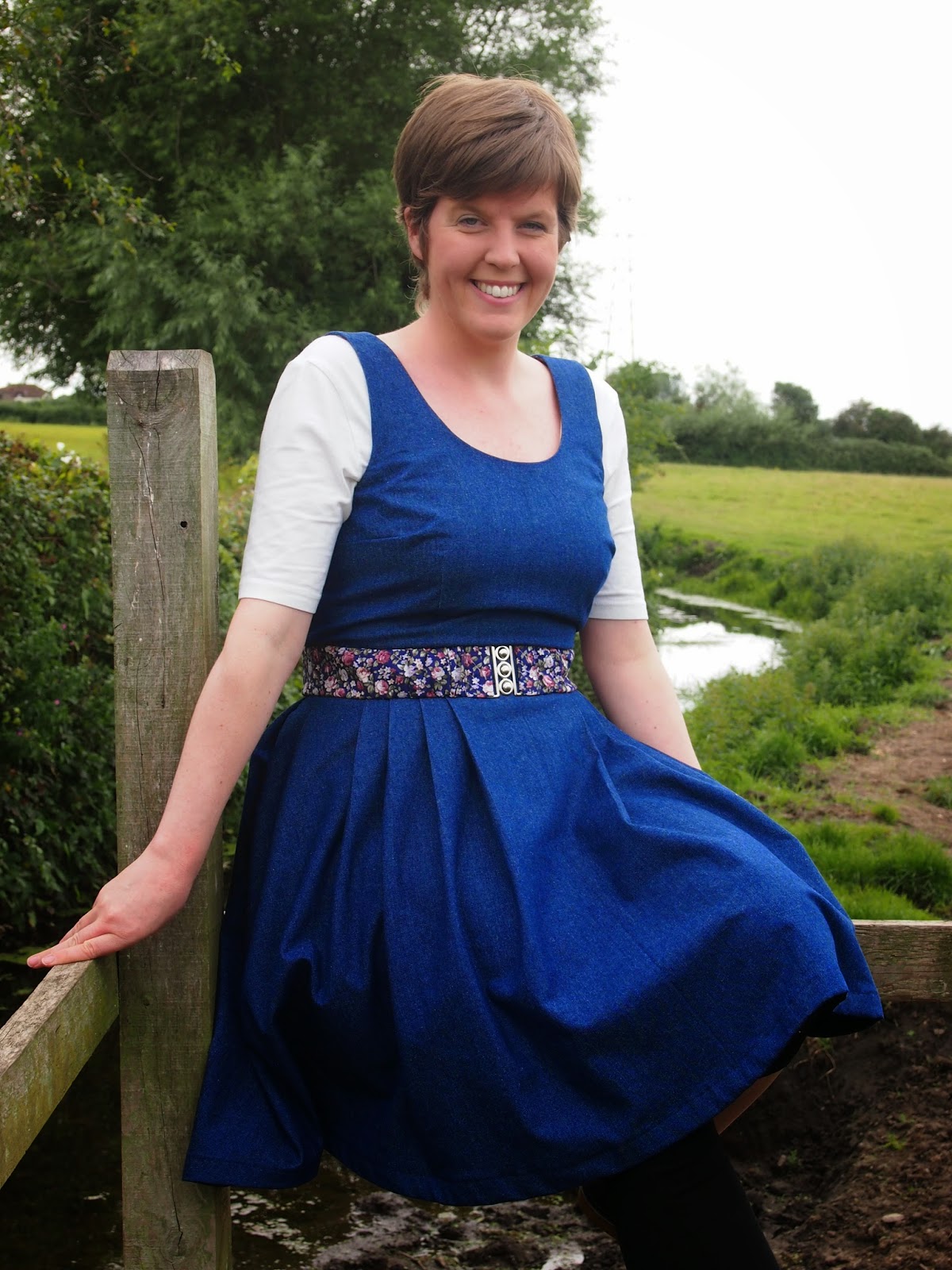 A sleeveless dress might also seem like a bit of an odd choice for autumn, but one of the good things about the shape of the Lilou bodice is that it can easily be worn pinafore-style over a top or a blouse as I've worn it here, and there are also no sleeves to get caught up under cardigans or jumpers so that'll make it good once autumn hits as well. This dress is a little warm to wear on the nicer days we're having still at the moment, and it does look a bit odd if I try to wear it on its own without any layers, but I have worn it a couple of times already and it's super comfy, and is casual whilst still looking nice if that makes any sense?! 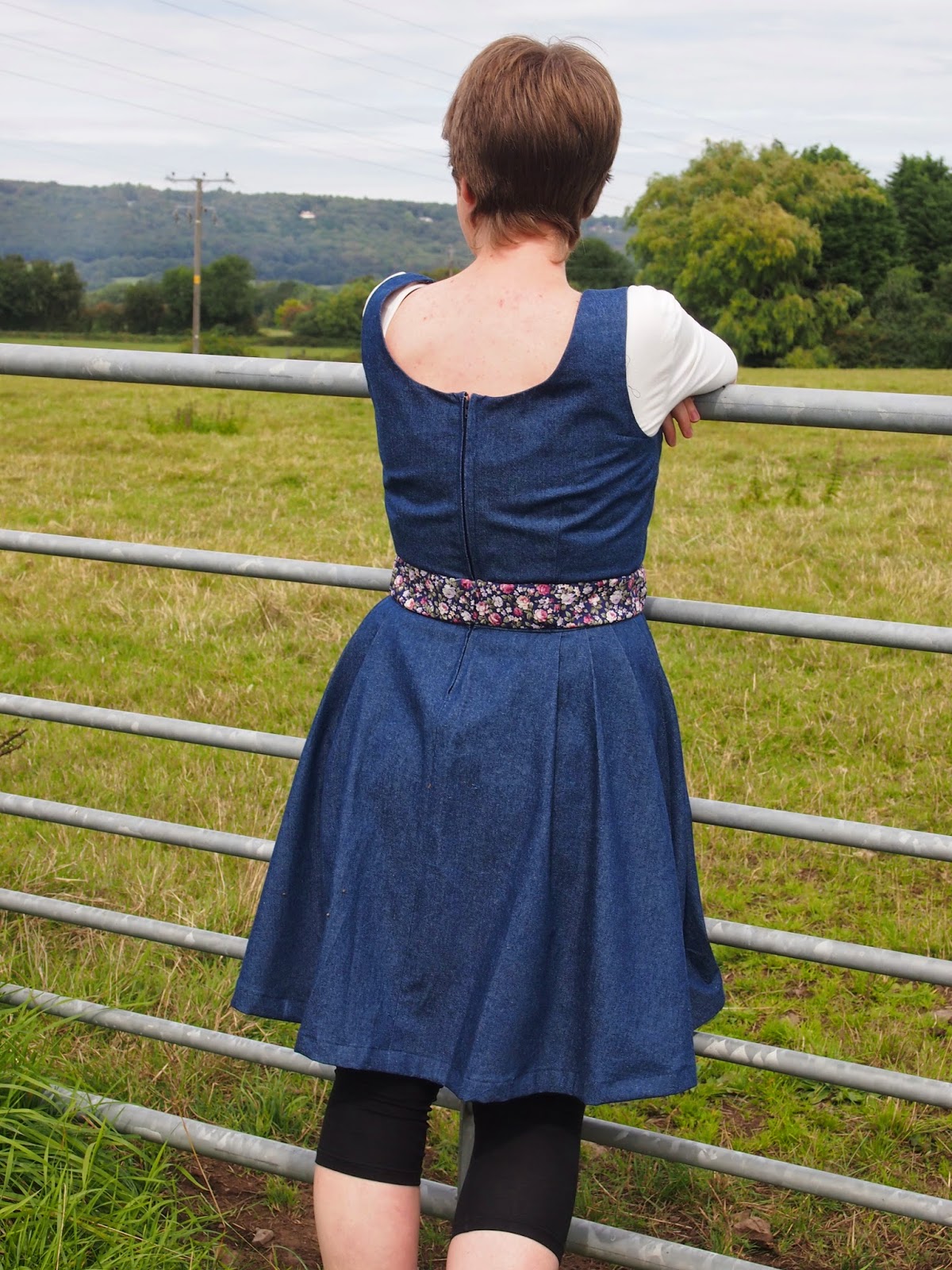 I used a regular centred zip for this version of Lilou instead of an invisible zip - partly because I wasn't sure if the denim, being a slightly heavier weight fabric, would work that well with an invisible zip, but mainly because when I went to buy the zip my local haberdashery only had white invisible zips, which I knew definitely wouldn't work and I was being impatient and didn't want to wait to find a different zip. It's a pretty good haberdashery, and they have a decent range of colours and sizes in normal zips, but only ever seem to have white or black invisible zips for some reason. I suppose they must find that's what sells but it seems a bit odd to me that they don't have more colours.

Other than that, I used the same size and length changes that I've used for my other Lilous (size 6 at the bust and hips, and a 5 at the waist, 1.5 inches added to the bodice and 2.5 added to the skirt) but didn't make any other changes. Part of me thinks maybe I should have tried adding pockets to this version, because I do love pockets and they are useful sometimes, but that part of me isn't arguing too strongly with the part of me that likes it how it is, so I think this one will stay pocket-less and I'll maybe try adding them next time I make the pattern. 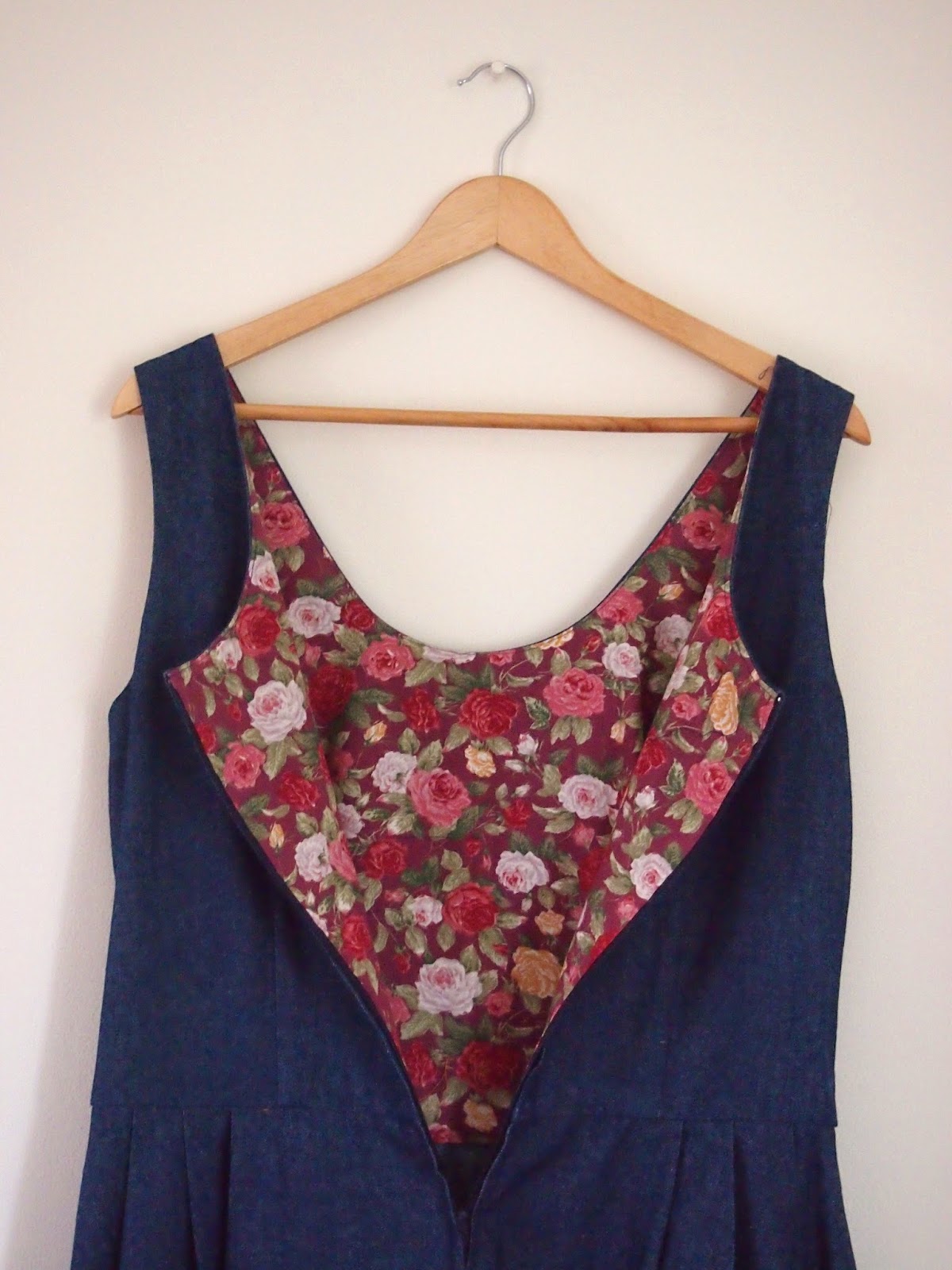 Oooh, look - another contrast lining! I particularly love the pretty print compared with the plain outer fabric on this Lilou, and as I've probably mentioned before it's a good way of using up off cuts from other projects. This time I used the remains of the fabric that I used for my Mortmain dress, and it reminded me that I really should make another Mortmain soon - another project to add to the list! 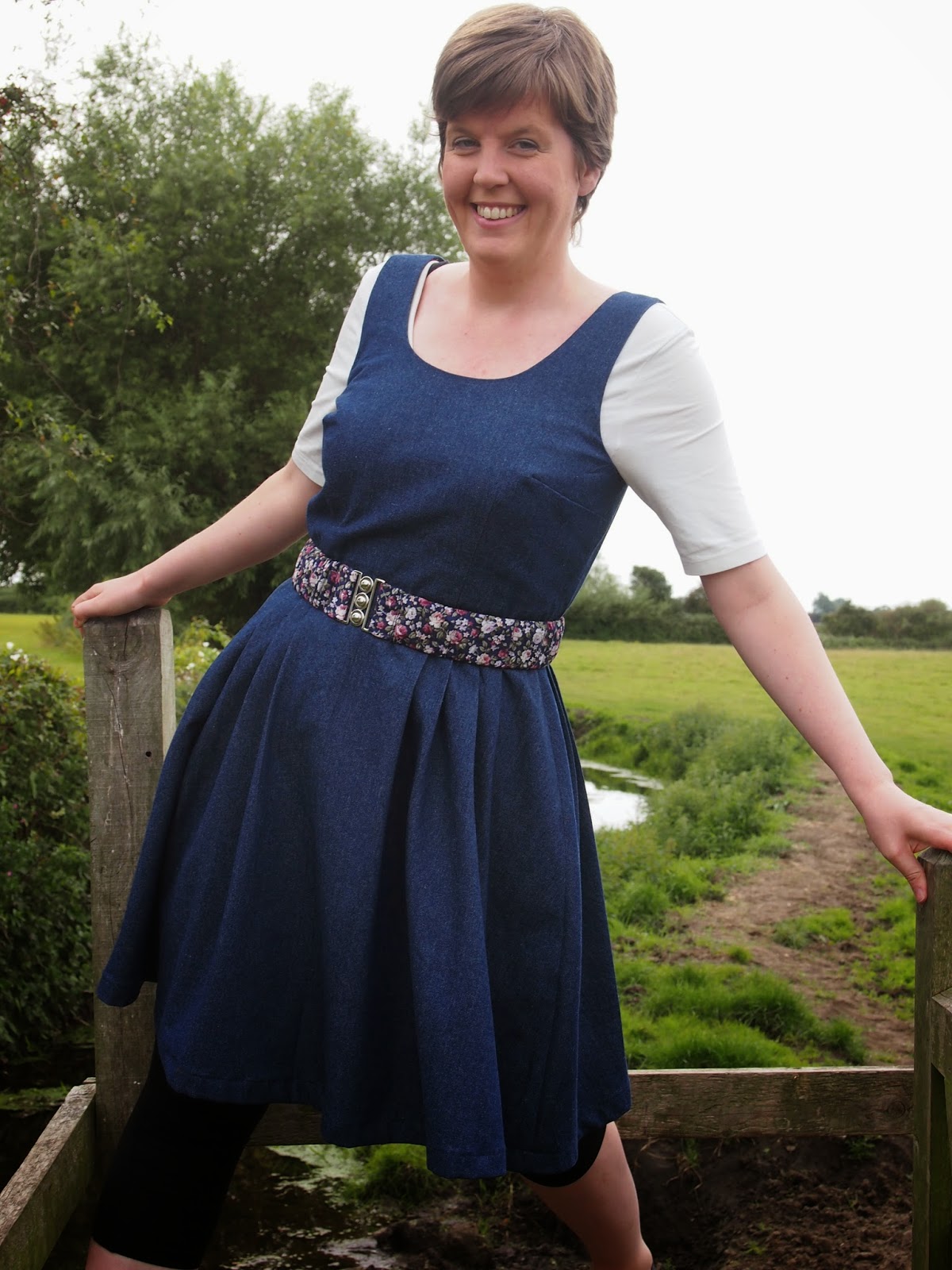 As this is now my third Lilou (fourth if you count the one I made for my Mum!), there's not much else new to say about this one - but I'm really happy with it. It came out exactly as I imagined it in my head and I know it will get worn a LOT! I've also decided that I'm going to use my Lilou dresses for OWOP, which is being organised by Handmade Jane and is kicking off this Saturday. Is anyone else joining in? What pattern have you picked?
Posted by Ruth - Nightingale and Dolittle at 12:18