Two finished garment posts within a few days isn't normal for me, but I had a weekend recently when I did very little other than sew (a good weekend!), so I got through a couple of projects quite quickly, including the dress I have to show you today. This dress wasn't planned. Not that I have a particularly detailed sewing plan, but I had told myself that I'd probably made enough summer dresses already this year. Then this month's copy of Love Sewing magazine arrived through my door with the pattern for the Ruby dress from Simple Sew on the cover. It was just my style, and then I spotted some fabric on ebay that I thought would make a nice Ruby, so really it would have been silly not to put the two together and create a pretty dress wouldn't it? So that's what I did! 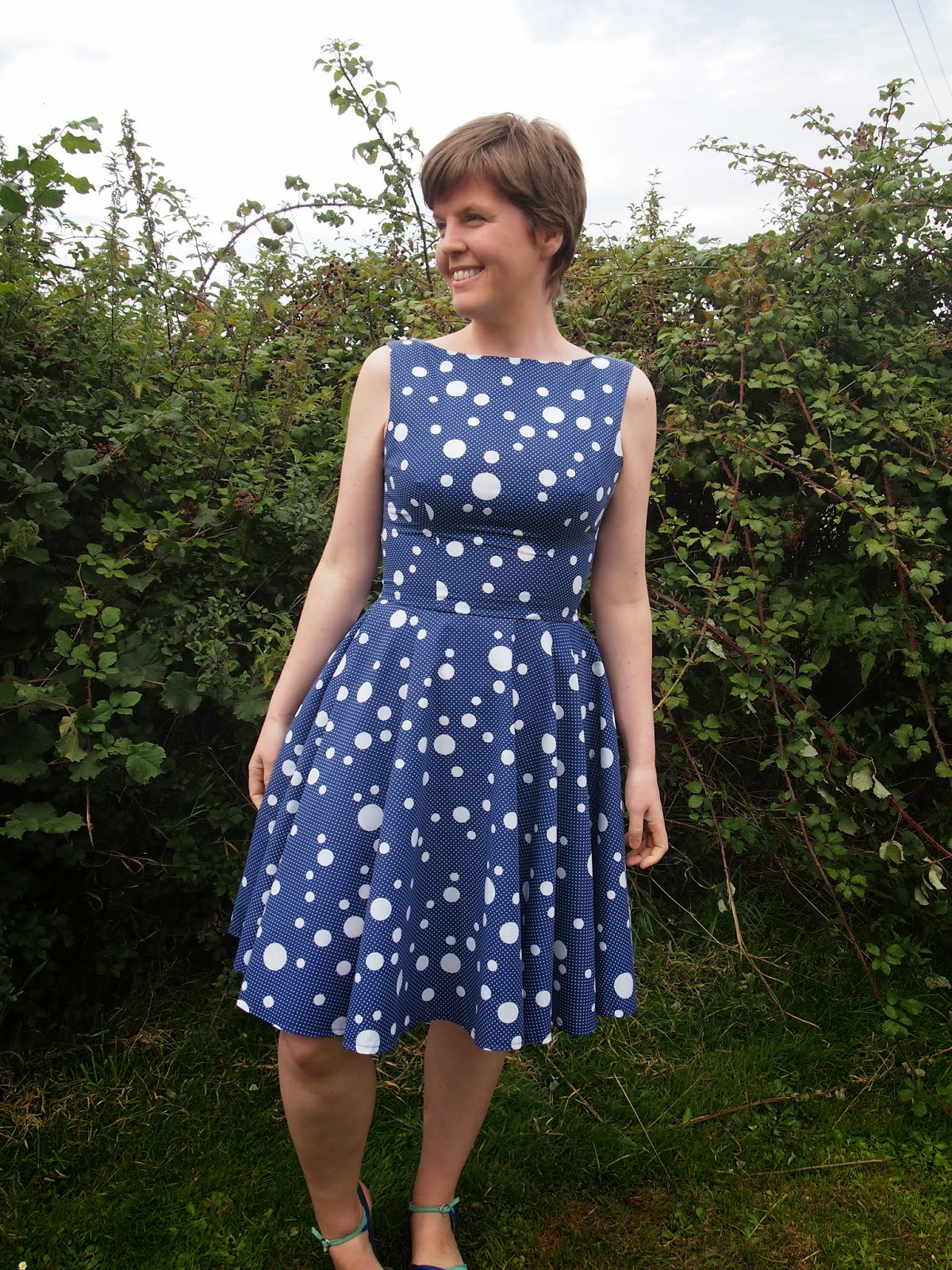 In my defence (not that I necessarily need one!), I have been thinking recently that I haven't made nearly enough polka dot items. I love polka dots, and I always tend to be drawn to them when I'm looking for sewing inspiration, but for some reason they seem to have not featured too highly on the list of things I've actually made. And blue and white is always a good combination for me, and fits in well with my cardigan collection so it's all good! 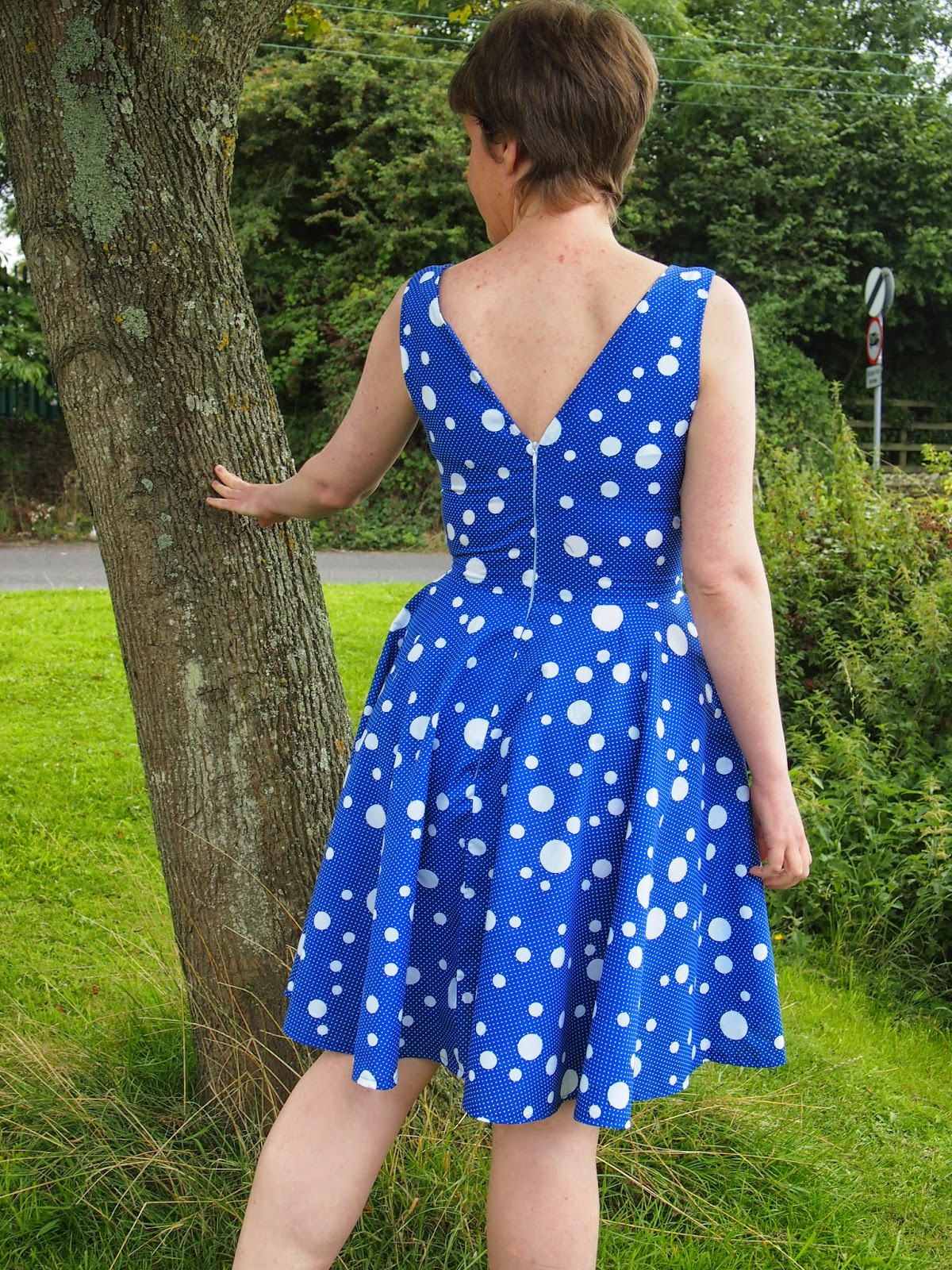 The Ruby dress has a fitted bodice with a bateau neckline and low V-shaped back, and a lovely full skirt. So this may be another fit and flare dress to add to my growing handmade collection, but it had some interesting details to make it different from the others that I've made before.

The pattern is described as being for an adventurous beginner, which I think is probably fairly accurate as it's all pretty simple (as the name of the pattern company would suggest!), as long as you're OK with inserting invisible zips. The instructions are clear and well-illustrated, although there are a couple of details missing that might confuse a complete beginner - the envelope doesn't tell you what type or length of zip you should be using (I used a 16" invisible zip), and I don't think it tells you what seam allowance to use (I used the standard 5/8" which worked fine for me) but maybe I just overlooked that bit! The envelope does promise full email support though, so that should sort out any queries. 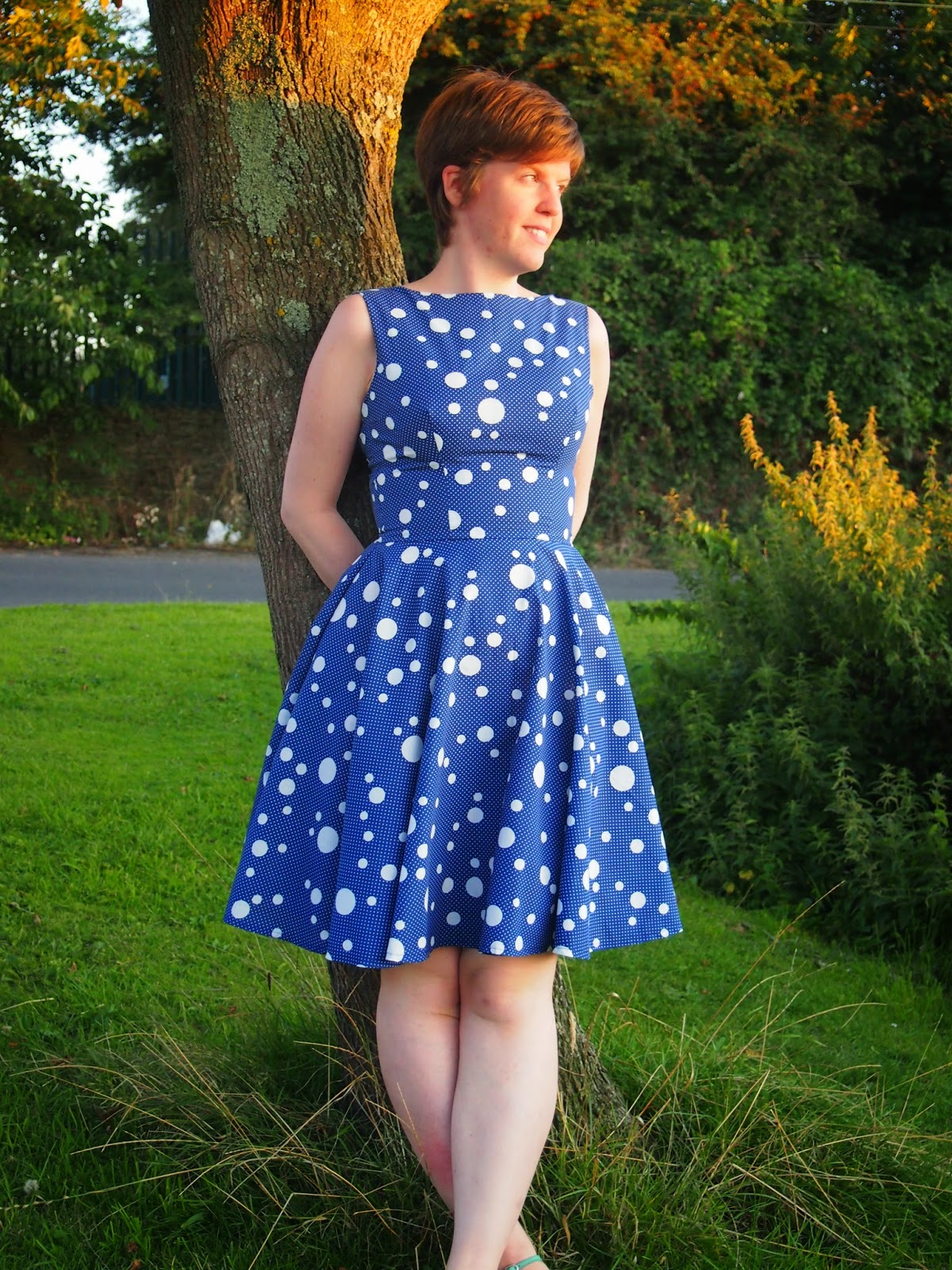 The neckline and armholes are finished together with one facing, which I prefer to having a separate neckline facing and armhole binding as it means there's no risk of the facing popping out at the neckline. If I make another Ruby dress though, I might try lining the bodice instead of using the facings, as I really like the lined bodices of my Lilou dresses.

I made a size 14, but added quite a lot of length. From the photos in the magazine, you can tell that this dress has been designed to be quite short, but I always think that dresses this shape look better if they're around knee length. If they're much shorter than that on me, I always feel like they look like they've been shrunk, but maybe that's just me being weird! I added 1.5 inches to the bodice, and 4.5 inches to the skirt. Lengthening the bodice is a standard adjustment for me, and I am probably on the taller side of average at 5 ft 8, but the skirt would have been really short on me without the extra length. I'm fairly happy with it as it is, but I might add an extra inch or two to the skirt next time. 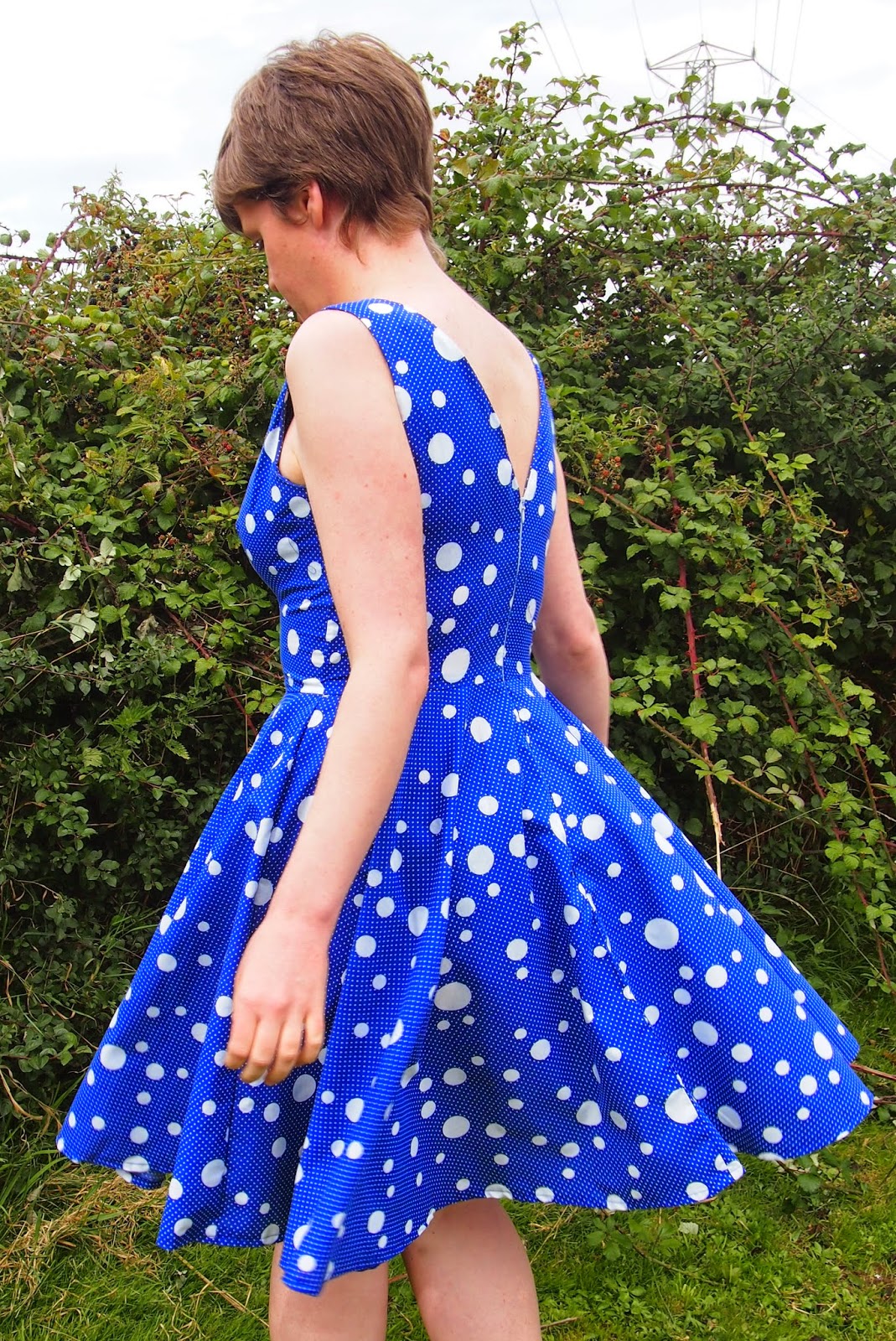 Have any of you read Love Sewing magazine? I always get sucked in by the pretty covers of magazines, so I had to check this one out when it was first released a few months ago. It's a nice magazine, with plenty of modern sewing projects for accessories, home decor and simple clothes. I haven't actually made anything from the magazine itself yet, but I've enjoyed reading it. Plus there's the bonus of having a free pattern every month. If you're only interested in dressmaking, then it might not be the one for you but it's definitely worth keeping an eye out for it just to see if you want the pattern - this month's issue with the Ruby pattern should theoretically still be available, and next month there'll be a trouser pattern on offer. 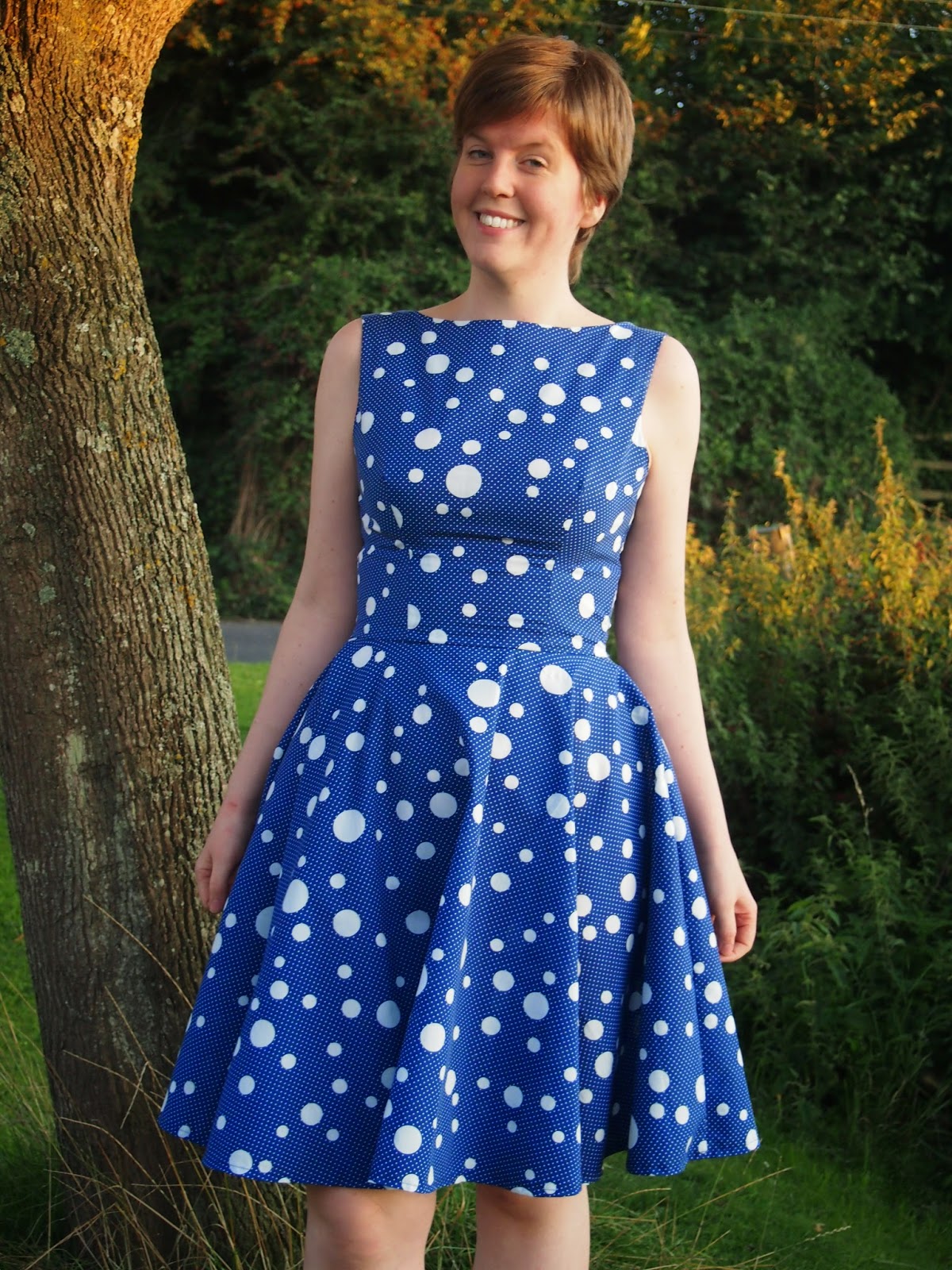 I'm pretty happy with how this turned out, and even happier now that I've heard that there could be some more heat coming our way next week so I might get more of a chance to show it off. And if the sun doesn't appear again, well then that's what cardigans were made for! But maybe I should think about planning some more autumn-appropriate sewing. Are you sewing for summer still, or planning for autumn already?
Posted by Ruth - Nightingale and Dolittle at 08:53