At the start of this year, the one sewing target that I set myself was to get to grip with knit fabrics. I started off quite well by making my Plantain top, but I hadn't done anything else about it since then. Not due to fear or anything, more just because I kept getting distracted by woven fabrics and patterns! Then Jennifer Lauren released the Bronte top, and it reminded me of an old favourite RTW t-shirt of mine so I knew I wanted to make one. It's taken me a couple of months since the release, but better late than never! 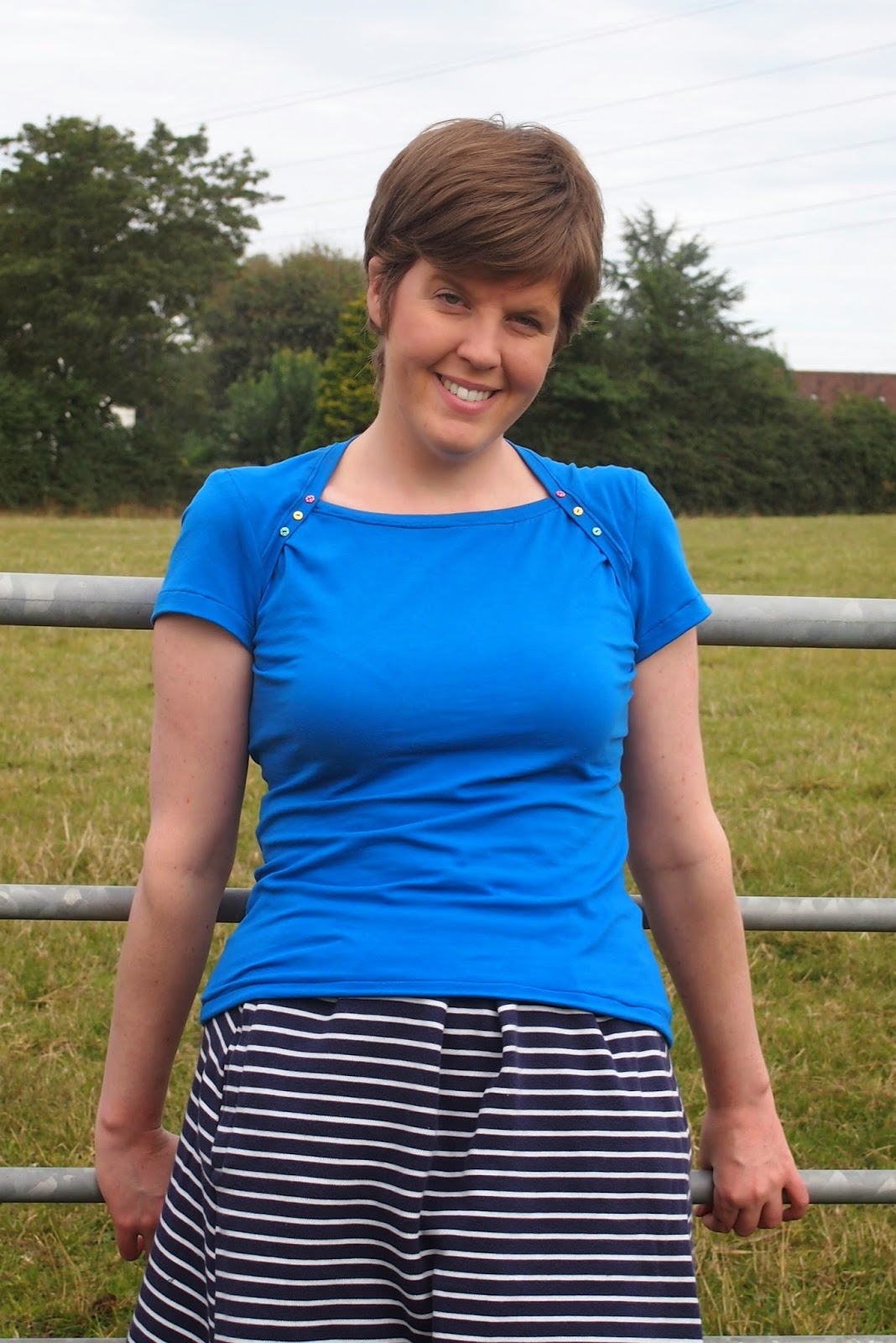 I was given the kick start to get sewing the Bronte when I saw that Amy of Sew Amy Sew was hosting Repurpose, Reuse, Refashion month this August. You see, a month or two ago I'd found this jersey maxi dress in one of my local charity shops for the princely sum of £1.75... 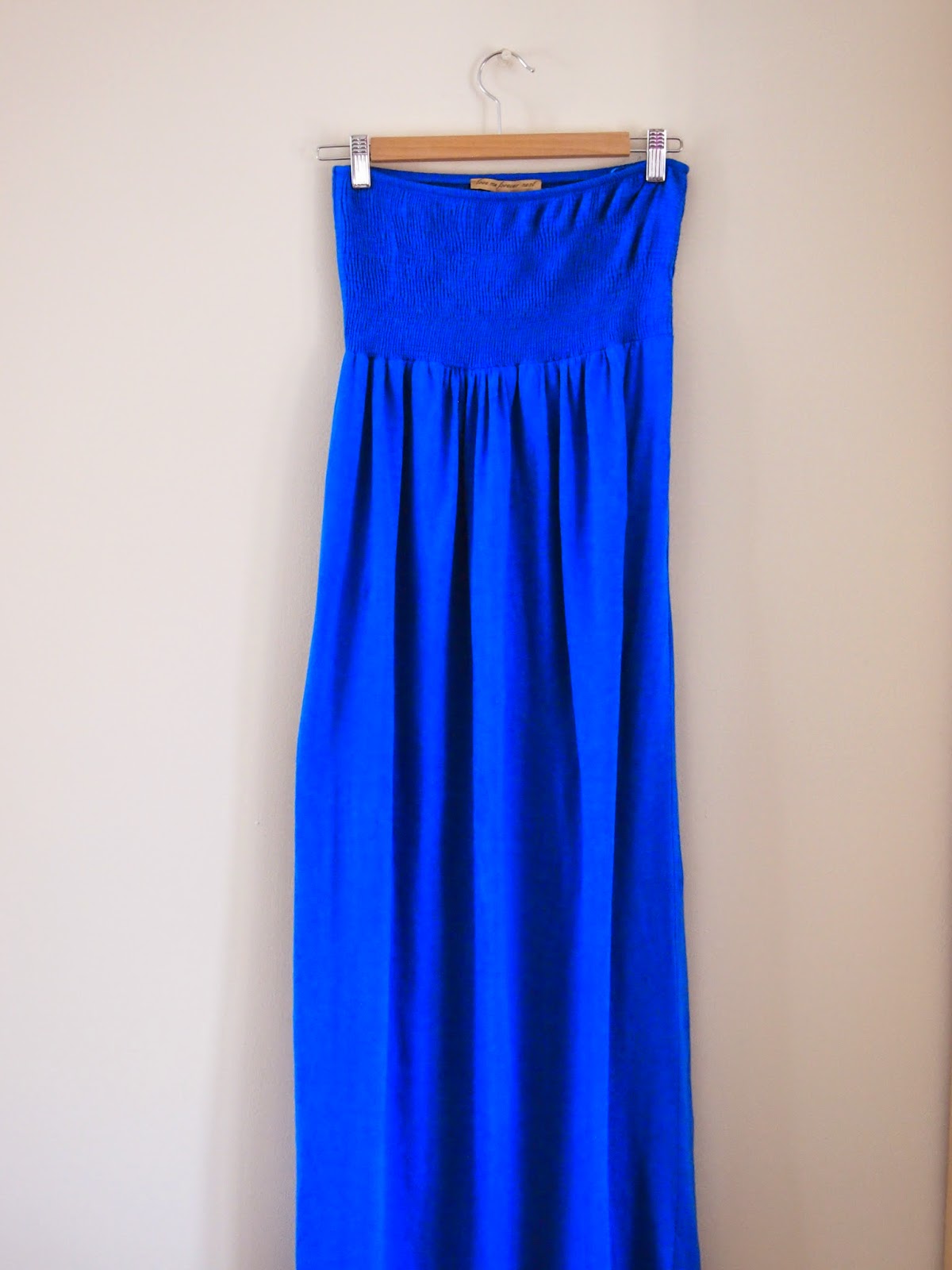 When I bought it, I knew I would never wear it as it was - I'm not a massive fan of strapless and Empire line isn't the most flattering shape on me. However, it was in good condition and didn't look like it had been worn much, I loved the colour, the jersey felt nice and soft and the advantage of the Empire line was that I knew the skirt pieces would be big enough for me to put the dress to good use somehow.

I was considering refashioning the dress by adding some straps and possibly extending the shirring round the bust down to waist level to make it more flattering for my shape, but the existing shirring went a bit saggy when I washed the dress so I decided just to cut that off and treat the skirt as a piece of material. There was just enough material for Bronte, so I took that as a sign that it was meant to be! 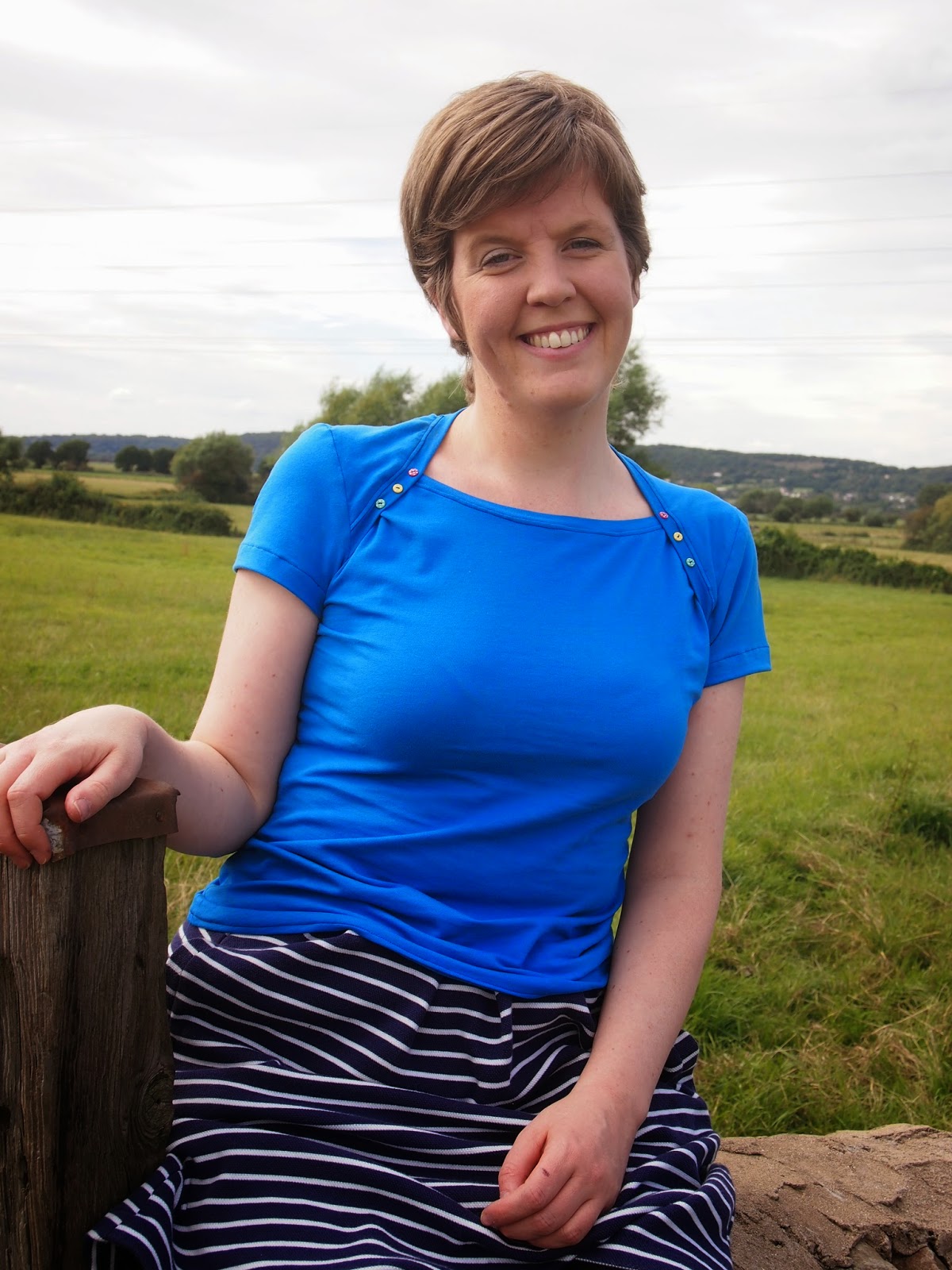 Anyway, back to Bronte! I really, really like this pattern. Like any knit top, it's obviously really comfy and easy to wear, but the 1940s-inspired shrug style shoulder detail makes it stand out from the crowd and be a little bit different. You might think this would make it more complicated to sew, but it's really not that difficult. The only difference from a normal knit top is that the front and back pieces are connected in a slightly different way, as the back wraps over the front, but although it is different I don't think it's any more complicated. 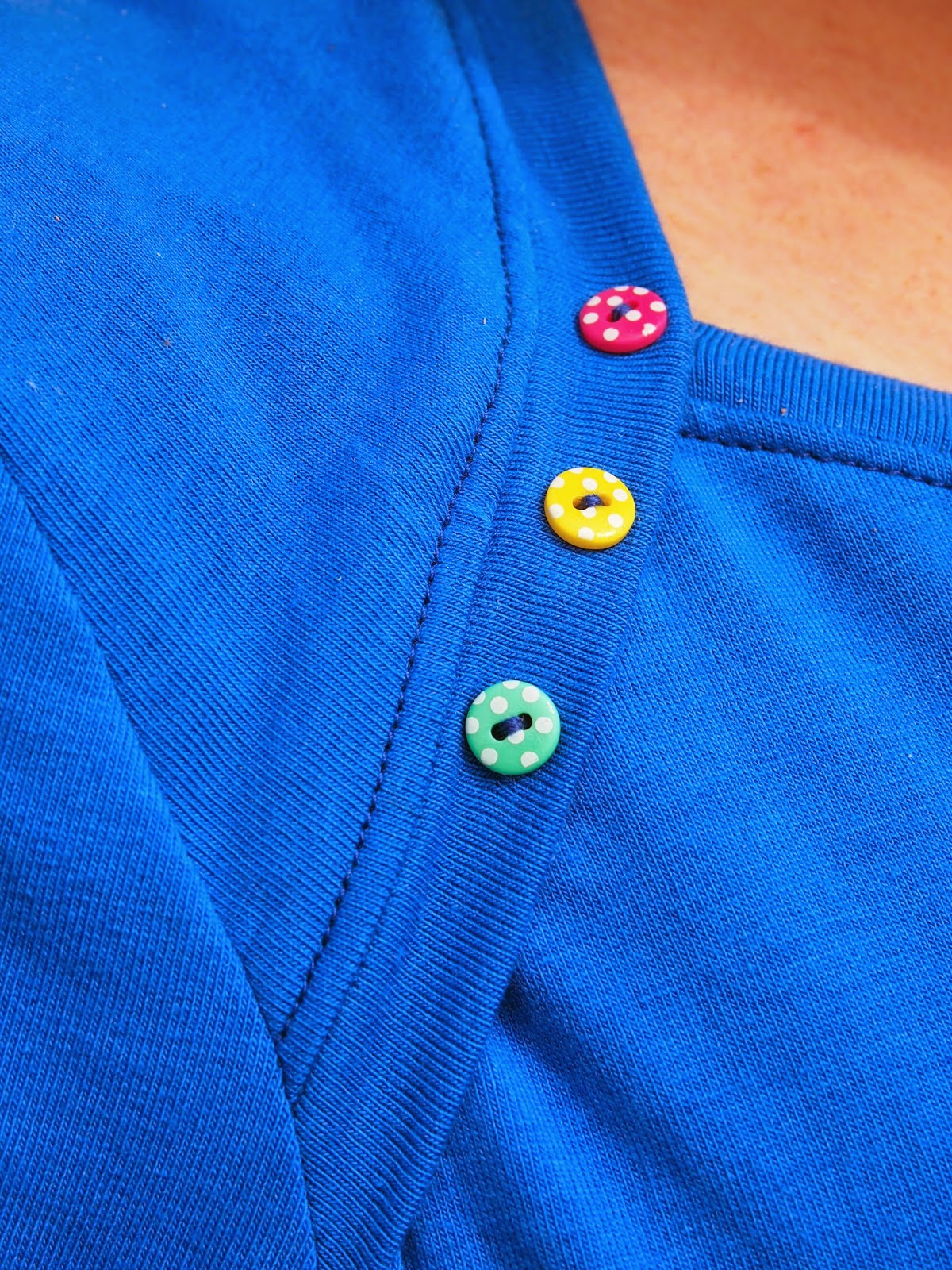 The neckline also gives you the opportunity to add a bit of extra interest by using a contrast binding or some pretty buttons to secure the shoulders. In my case, I had some star shaped buttons which I was planning to use, but when I tipped out the contents of my button jar this pack of bright buttons that I'd been given for my birthday fell out and I loved the way they looked with the blue so I changed my plans!

I made a straight size 14 with no adjustments. I was sort of treating this version as a (very!) wearable muslin, as given that the material cost me £1.75, I wasn't going to worry too much if it didn't turn out totally perfectly. As it is, I'm pretty happy with the fit so it's all good! I might consider trying to lower the neckline a little bit in a future version to make it even more like my old top, but I like it as it is. 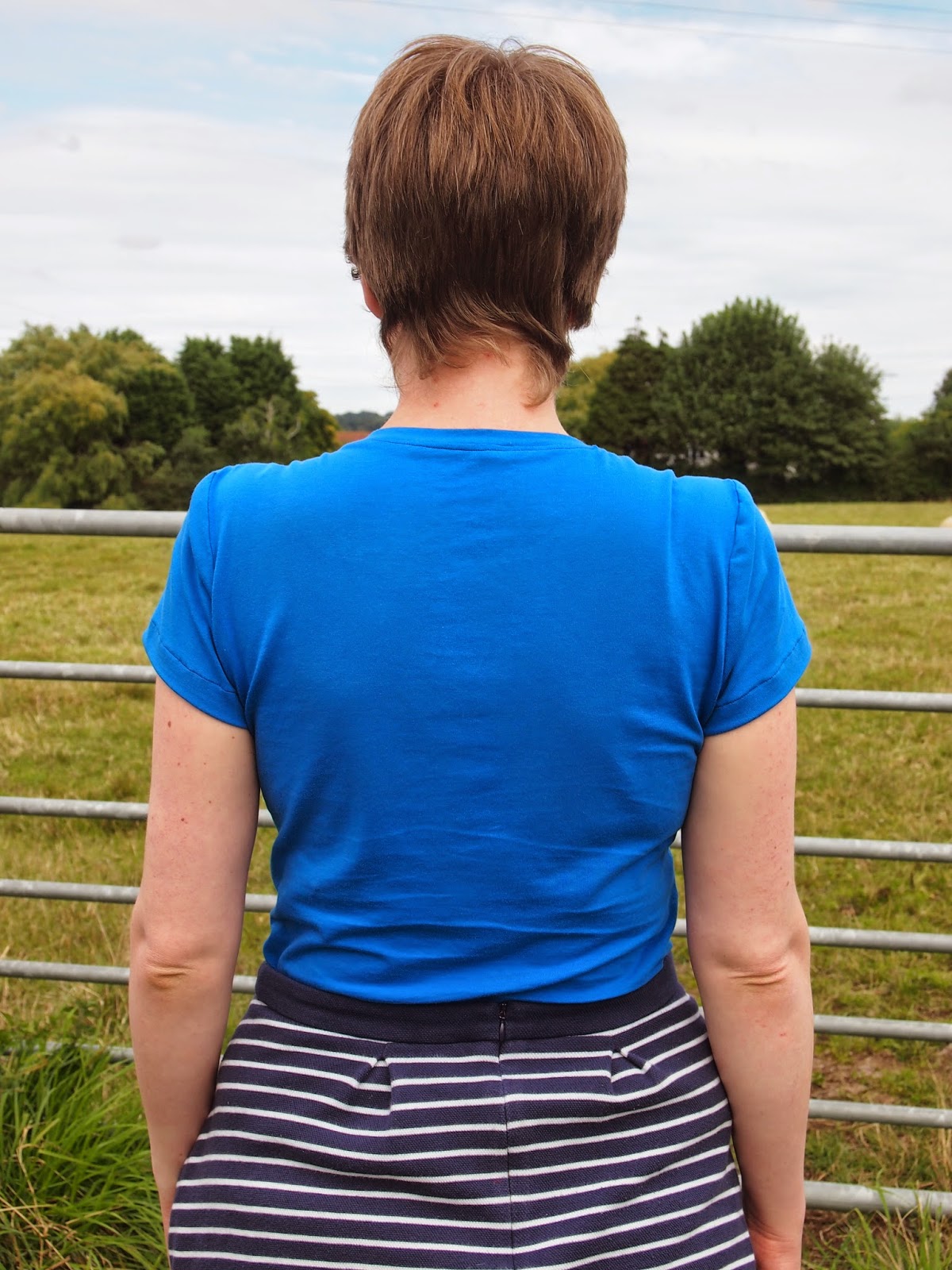 If, like me, you're a bit of a newbie when it comes to sewing with knits, I'd definitely recommend giving the Bronte top a go. As I said above, it probably looks more complicated than it is, but it is actually fairly simple to sew. It's only the second time I've sewn with knits, and the only problem that I had was my twin needle deciding to break for no apparent reason! The instructions are nice and clear, and also include some really helpful tips on choosing your fabric, as well as hints about sewing with knits in general. Also, I don't have a serger/overlocker, so this is proof that you definitely can sew the Bronte using just a normal sewing machine.

As I mentioned in my last post about my Bellini, I do prefer paper patterns to PDFs (not least because my printer sometimes has a mind of its own and decides to print multiple copies of one page instead of printing the page range I'd asked it to, as it did in this case!), but this was another PDF that was no trouble to put together. I really like the fact that the individual pattern pieces are printed on separate groups of pages so you're dealing with manageable numbers of pages to stick together instead of covering the entire floor! 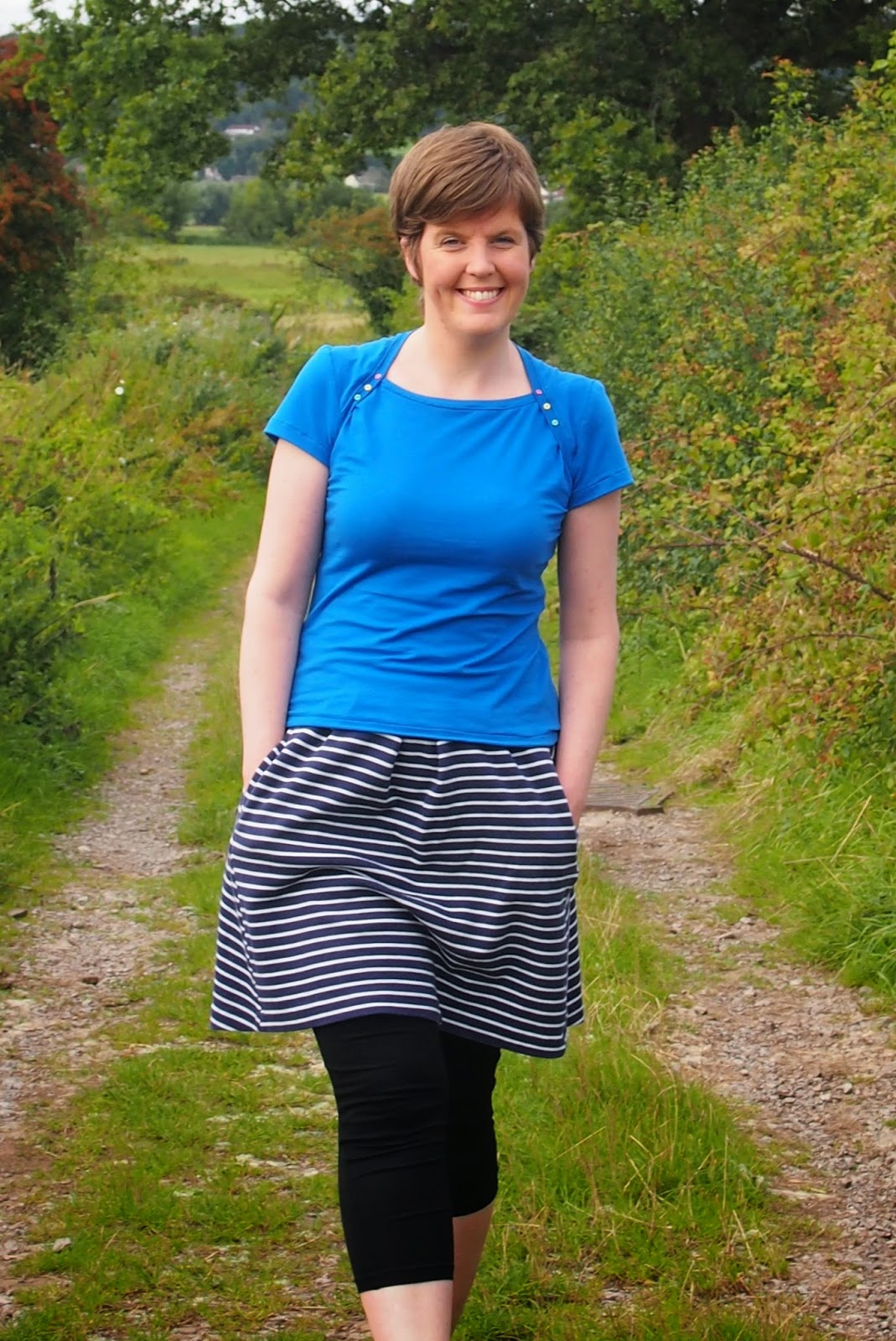 Sewing Bronte went really well and I'm definitely planning on doing more about my aim of sewing with knits now. There'll be more Brontes at some point in the future, and I've also got the Coco and Lady Skater ready to try - I just need to make my mind up about what fabric to use! Has anyone got any favourite sources of knits in the UK? It's always good to have recommendations!
Posted by Ruth - Nightingale and Dolittle at 09:00