If you saw my OWOP post, you'll have already caught a sneak peek of this project (and the photos of it will look very similar to my OWOP day 1 outfit!). I'm taking a little break from talking about sewing today, and switching to knitting and more specifically my Cria cardigan. 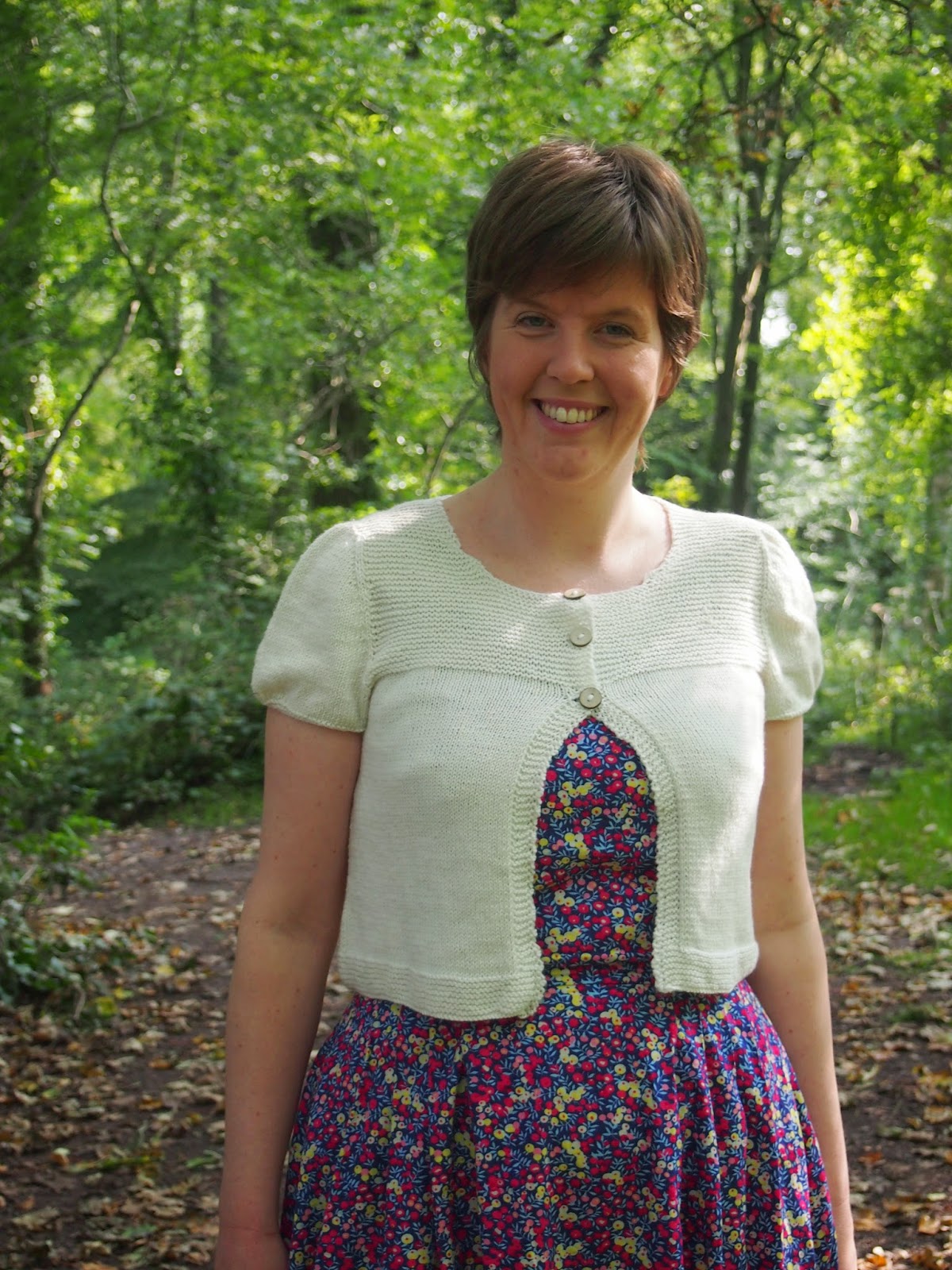 The pattern is by Ysolda Teague, and is the first one that I've tackled from the lovely book Little Red in the City. All of the patterns in the book are gorgeous, but I chose to be sensible and knit this pattern first because I'm still a relatively inexperienced knitter, and I'd never knit anything using the top down seamless method on circular needles, and this seemed like it would probably be the simplest of the patterns for trying out those skills and getting used to them. There's some lovely cabling and colourwork in the other patterns in the book, which I'll definitely be trying out at some point, but I thought the simpler details of the Cria would be more within my reach at the moment. 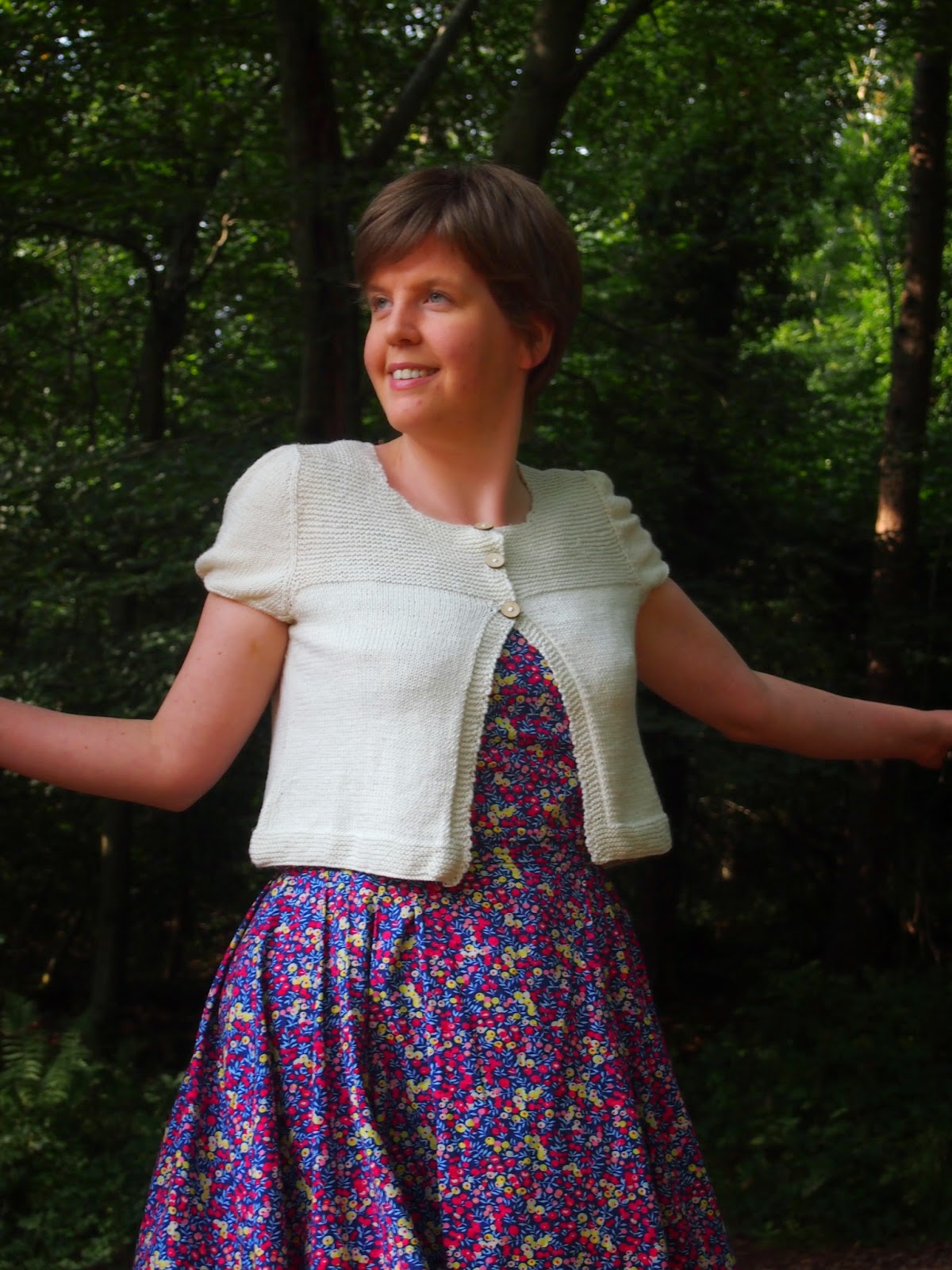 The Cria has a garter stitch yoke and edgings, with stocking stitch sleeves and main body. The book features long and short sleeved versions - obviously I went for the short sleeves as I wanted this to be a light summery cardigan. My version is also a couple of inches shorter than the version in the pattern because I wanted it to be waist length to go over my summer dresses. To get the shorter length, I just measured the length of that I wanted it to be down my back and stopped knitting at that point - a definite advantage of the top down method! The pattern in the book also has front pockets, but I chose to leave them off because of having a shorter length, and also because I didn't think I'd use them, and by the time I got to the point where I'd have to add them in, getting it finished quicker seemed more appealing than adding the pockets if they were really only going to be decorative. Possibly a bit lazy, but I don't miss the pockets at all so I'm happy I made that decision. 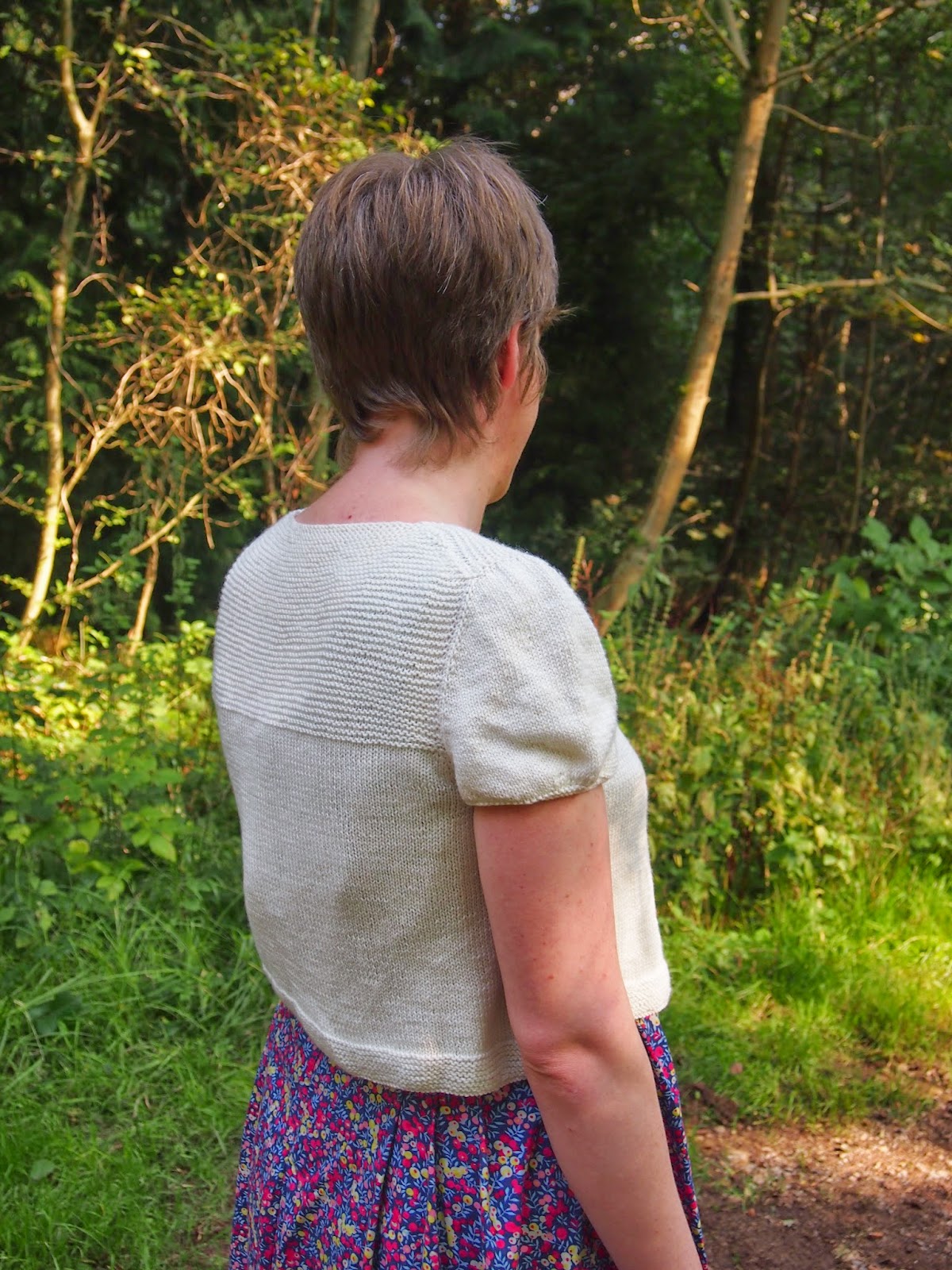 The knitting didn't go completely smoothly, and this is actually my third attempt! The first attempt was pulled apart fairly quickly after I'd been a bit uneven when picking up stitches along the shoulder pieces during the yoke setup. The second attempt got quite a bit further, probably further than it should have done to be honest! I was almost finished the yoke section when I realised that I hadn't been doing the make one stitches quite right (entirely due to my own stupidity rather than anything wrong with the pattern or instructions), and that was why I had holes forming at the edge of the sleeves. I considered soldiering on and just darning the holes closed, but I knew I wouldn't be happy with that, so I ripped the whole thing apart (not a happy process!) and started again. Thankfully it was third time lucky (apart from hurting my wrist at one point meaning I couldn't knit for a week or two), but all this did mean that I finished it much later than I originally wanted to. Never mind, better to take my time and do a good job than rush to get things finished by my self-imposed deadlines! 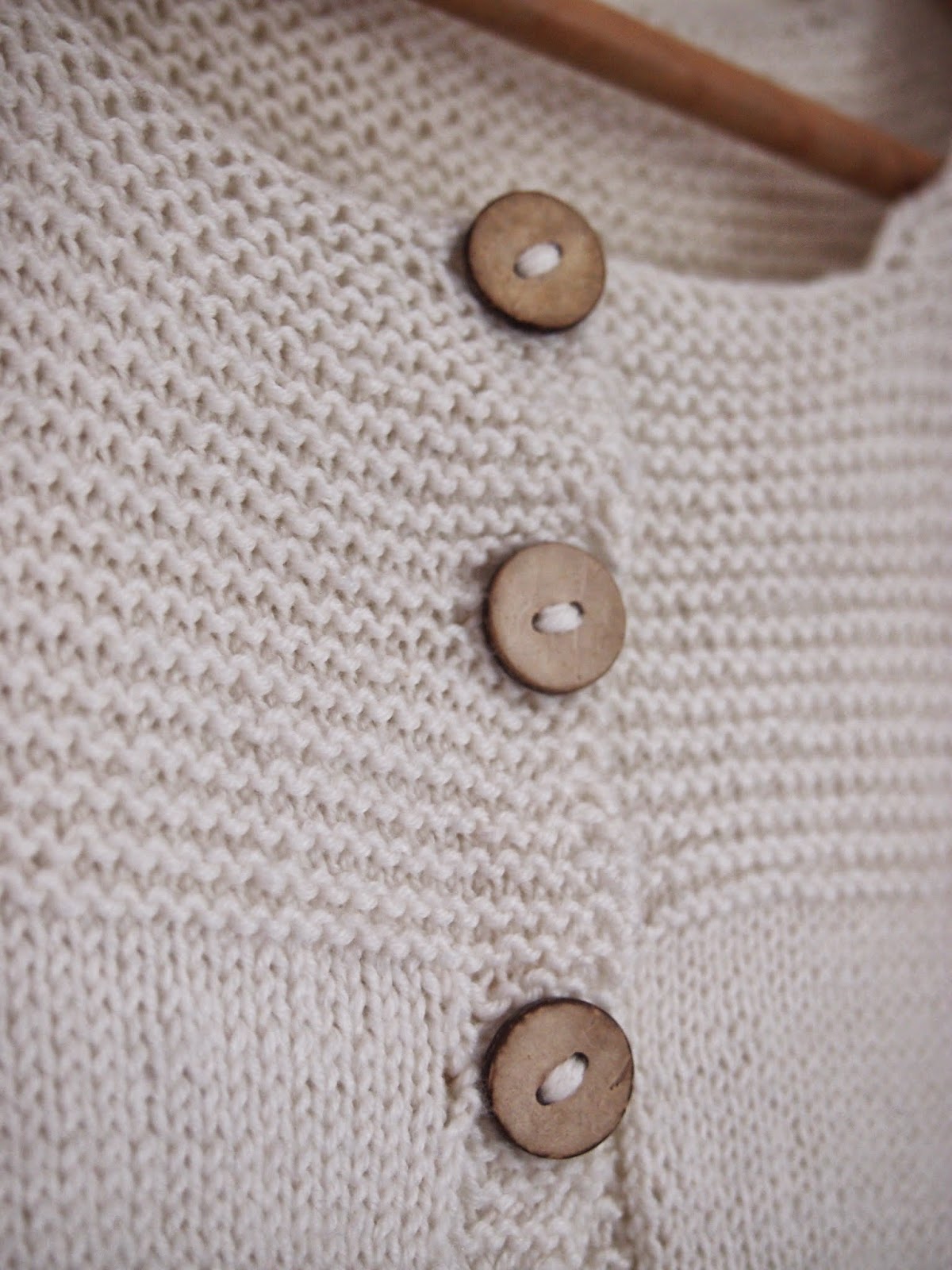 I used Sublime Baby Cashmere Merino Silk 4 ply in Vanilla, which I got from Black Sheep Wools - yes, I realise it's meant for babies, which I clearly am not, but it's a super soft yarn and the finished cardigan feels lovely to wear.

I originally wanted to use some pearly buttons, but I couldn't find any in a colour that looked quite right with the yarn so I decided to go with wooden buttons instead to keep things neutral. I did have to laugh when I was looking at buttons, and was briefly wondering about going down a completely different route and using strawberry buttons and a lady standing next to me told me not to because "if you use those, they try to eat them", obviously thinking I was going to use the buttons on something for a child - I didn't like to tell her they were for me, and hopefully I can be trusted not to eat buttons by now! 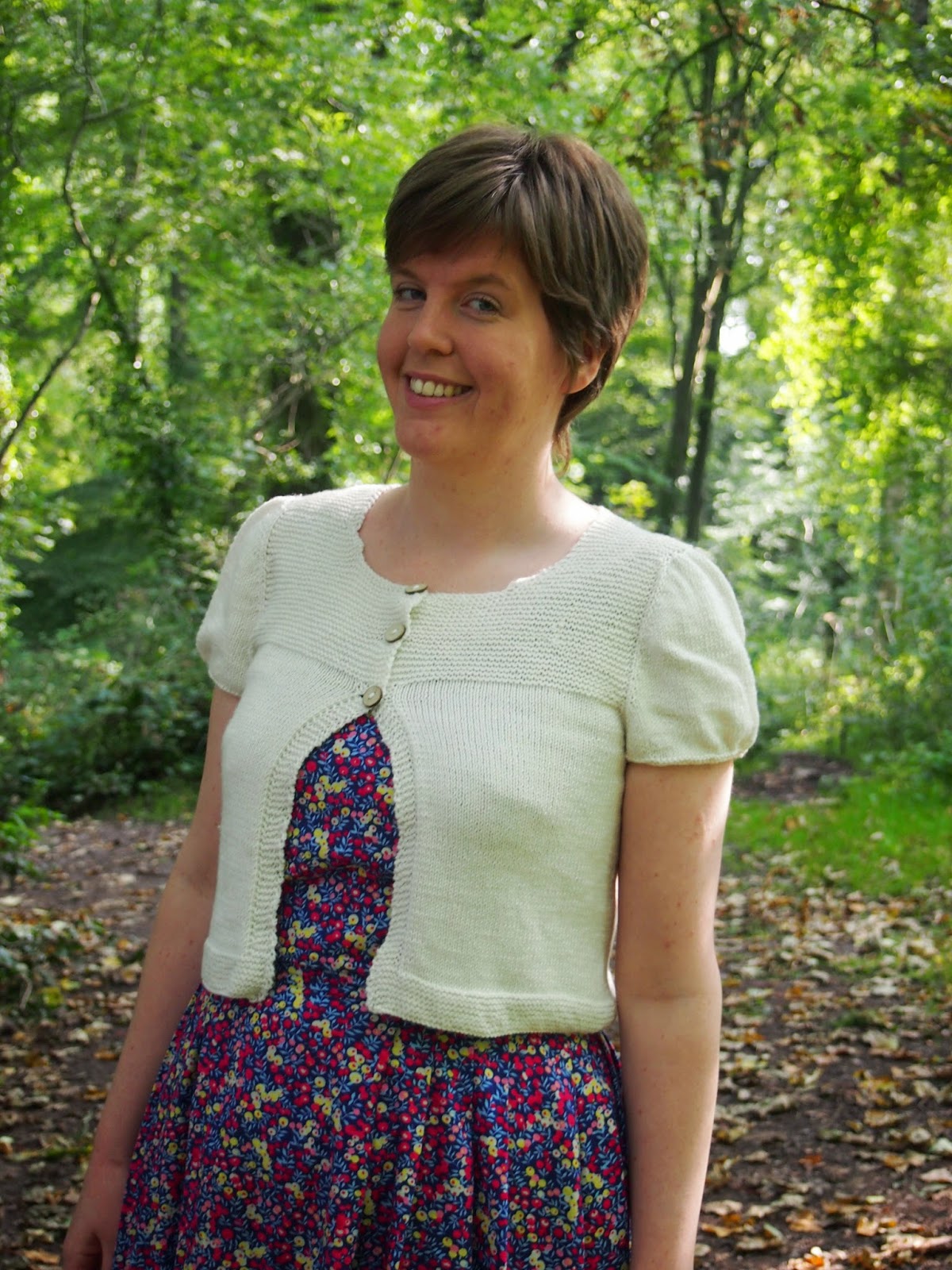 So there we go, that's my Cria cardigan! It's not faultless, there are little imperfections here and there, but they're not very noticeable if you don't know where they are. And even though I know where they are, I really don't mind them - I'm definitely still learning and knitting this cardigan taught me a lot, which is always good. I'm glad I persevered and ended up with a very wearable cardi at the end of the day. I'm now trying to master the art of intarsia for a jumper I want to make this winter, but I'm looking forward to trying some of the other Little Red in the City patterns at some point, if nothing else, I NEED a Chickadee in my life! Have you been doing any knitting lately?
Posted by Ruth - Nightingale and Dolittle at 18:17