Bronte & Delphine: saved by the buttons

Things have been a bit quiet around here recently - I've been busy making presents for family birthdays and then forgetting to get decent pictures of them, or being too distracted by reading other people's blog posts to actually get round to writing posts of my own. I'm putting that right today though and have a whole handmade outfit to share with you - a Jennifer Lauren Bronte top and a Love at First Stitch Delphine Skirt. 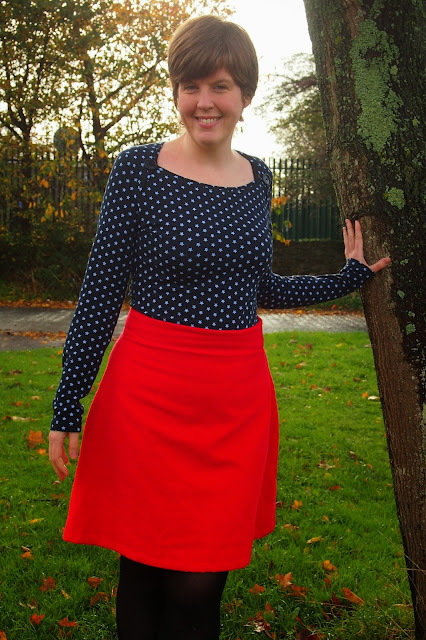 This may be a whole me-made outfit, but both Bronte and Delphine are fairly simple patterns so I finished both projects pretty quickly. I think they took me about one evening each, and I'm not a particularly speedy sewer. 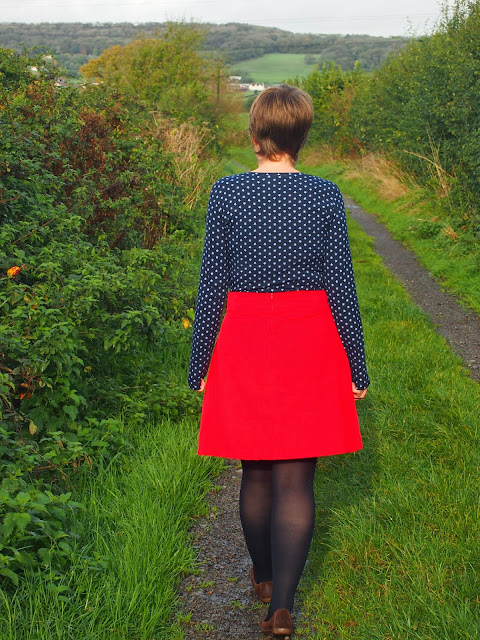 I didn't necessarily intend for them to be worn as an outfit - Delphine was the answer to my yearning for a red skirt to wear with my first Bellini blouse, and I decided to sew the Bronte to boost up the numbers of long-sleeved tops in my wardrobe ready for the cooler weather - but they work well together and I figured that as they're both fairly simple projects I might not have too much to say about them so I might as well put them together in one post. 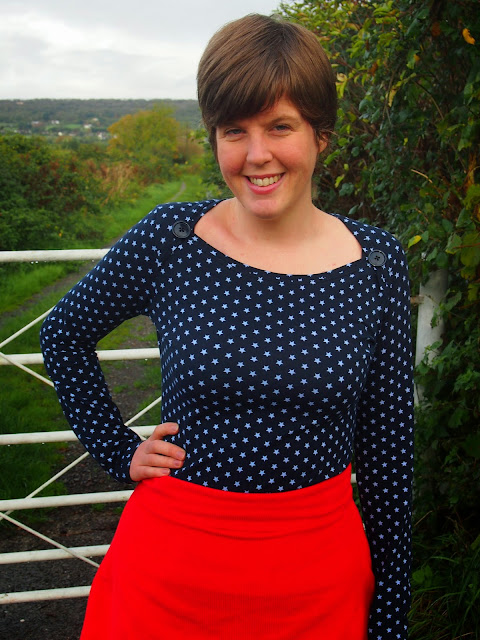 So, Bronte...I really like the short-sleeved Bronte that I made in the summer, so it was the obvious pattern to choose when I wanted to make a long-sleeved t-shirt. As I'd already made the pattern before, this time it was a nice and speedy project. I made a size 14, with no alterations at all. I mentioned in my post about my first Bronte that I might lower the neckline on future versions, but having worn the top more I actually like the neckline as it is so no changes needed.

The fabric is a cotton/spandex jersey from myfabrics. It's lovely and soft, and I'm definitely tempted to order more jersey from there - they have so many prints! It's the kind of jersey where the print is applied to a white base, so the colour does fade slightly if the material is overstretched but it really has to be stretched a LOT to do that, and it isn't a problem at all for me. 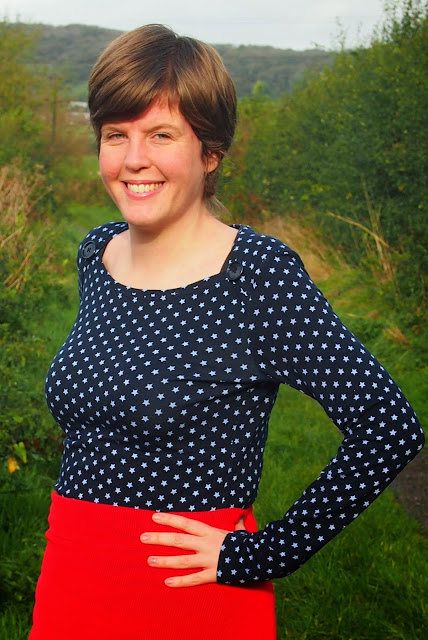 Confession time! I came very close to ruining this project. It was all nicely sewn up, and all I had left to do was stitch down the shoulder overlap. I was trimming the neckband seam allowance and somehow managed to cut a hole into the main fabric of the top - aaaargh! Usually this would send me into a fit of melodrama, but for some reason I was remarkably calm about the situation this time. The hole wasn't that big so I stitched it up, leaving it hardly visible but still far too visible for my liking. Inspiration for a solution suddenly came in the form of my button jar. I had been planning to leave the shoulders plain for this version instead of adding buttons, but I had these oversized buttons that were just the right colour and the perfect size to cover the sewn-up hole. Problem solved, disaster averted, happy Ruth! 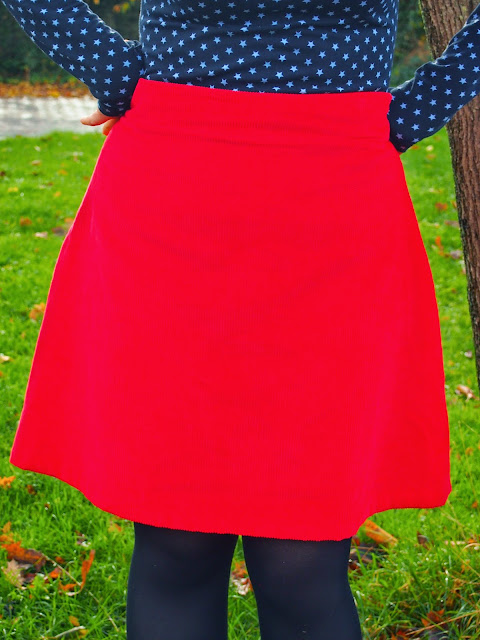 Now, Delphine. As this point I should point out that this post could also have been entitled "Red is really difficult to photograph". No matter what I tried, the skirt came out looking almost like a luminous block, but I promise it's not like that in real life. It's actually a nice red corduroy from Calico Lane, and it's lovely to wear.

Delphine is one of the earlier projects in Love at First Stitch, and is a nice simple pattern aimed at beginners, so makes a speedy but very wearable project if you've got a bit of sewing experience. As I'll mainly be wearing this with tights I added a lining using the method in Tilly's tutorial, but even with the extra steps which that involved, this was still finished really quickly. It would have been even quicker if I hadn't, for some inexplicable reason, initially traced and cut the waistband two sizes smaller than I intended to!

As with the other projects I've made from Love at First Stitch, the instructions were all really clear and super easy to follow. I made a size 5 at the waist, grading to a 6 at the hips. Other than that, I made no changes to the pattern - there's no need to! 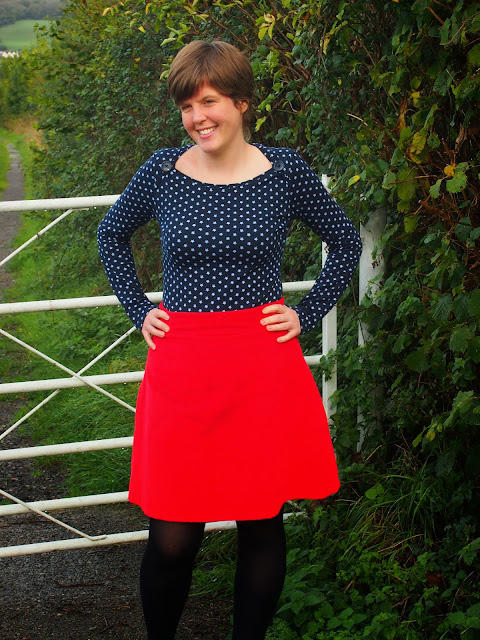 All in all, I'm pleased with how both of these turned out and they're both really great wearable basics. I've realised I've got some material in my stash that could make a fantastic second Delphine (you only need 1 metre if you've got wide fabric - always good!) so keep an eye out for that at some point this winter, and I'll be making more incarnations of Bronte in the future for sure - but hopefully without nearly destroying them next time. Have you averted any sewing disasters recently?
Posted by Ruth - Nightingale and Dolittle at 09:02