Yes, I know, it's well into January now and Christmas has been and gone but, as it's still (just about) Twelfth Night, I'm going to go ahead and talk about some of the gifts that I made this year, if nothing else because I like to have a record of what I've been making on the blog, but hopefully it might also give someone else an idea of gifts to make in the future. 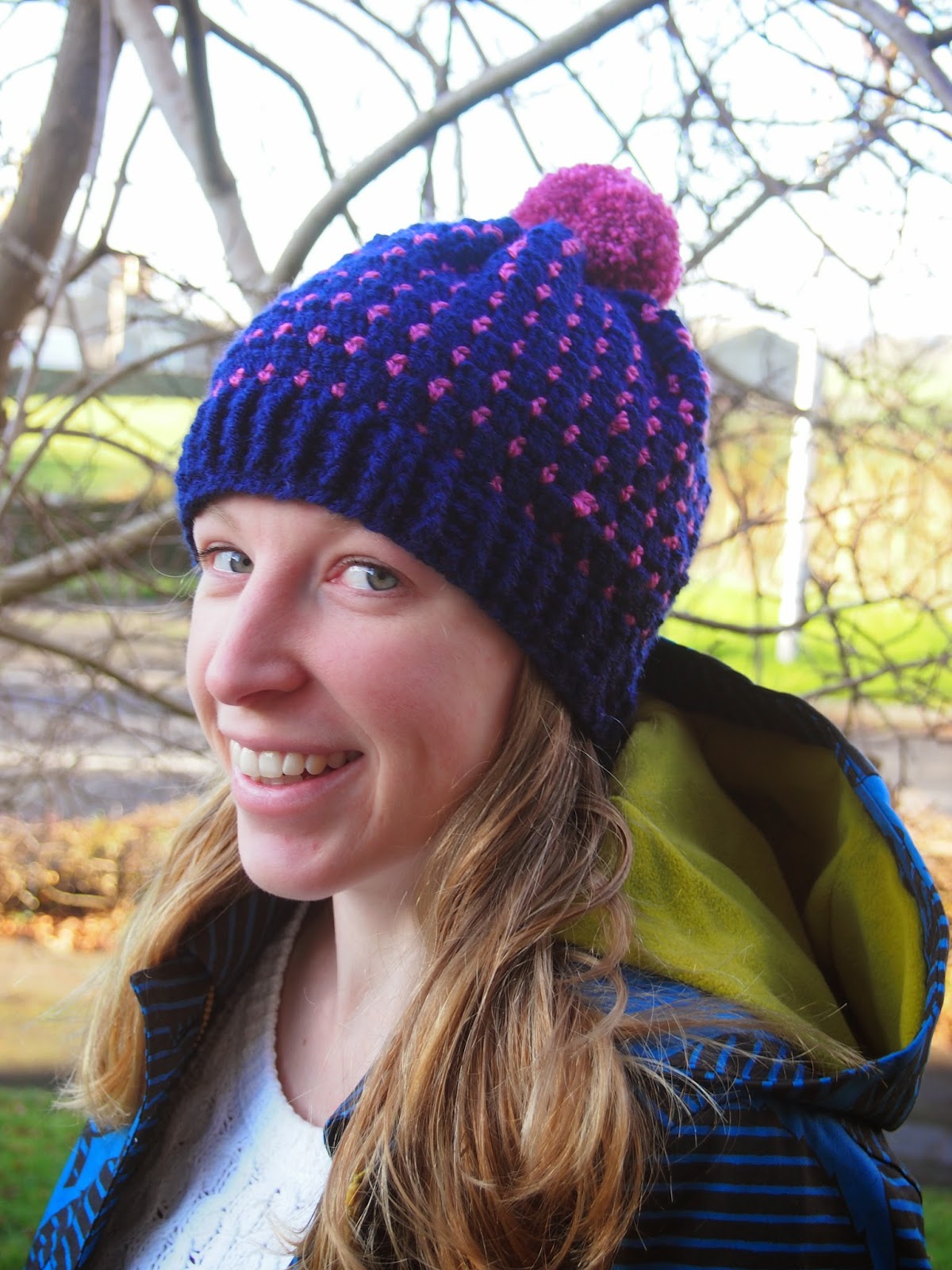 I went a bit crazy on the crochet front this year, mainly due to the book Hook, Stitch & Give by Kat Goldin. I spied the book online when it was released a couple of months ago and instantly knew that the bobble hat on the front cover would be a perfect gift for my sister. Combine that with lots of other pretty patterns that I liked the look of for me or knew I could make for other people, and buying the book was a pretty easy decision. 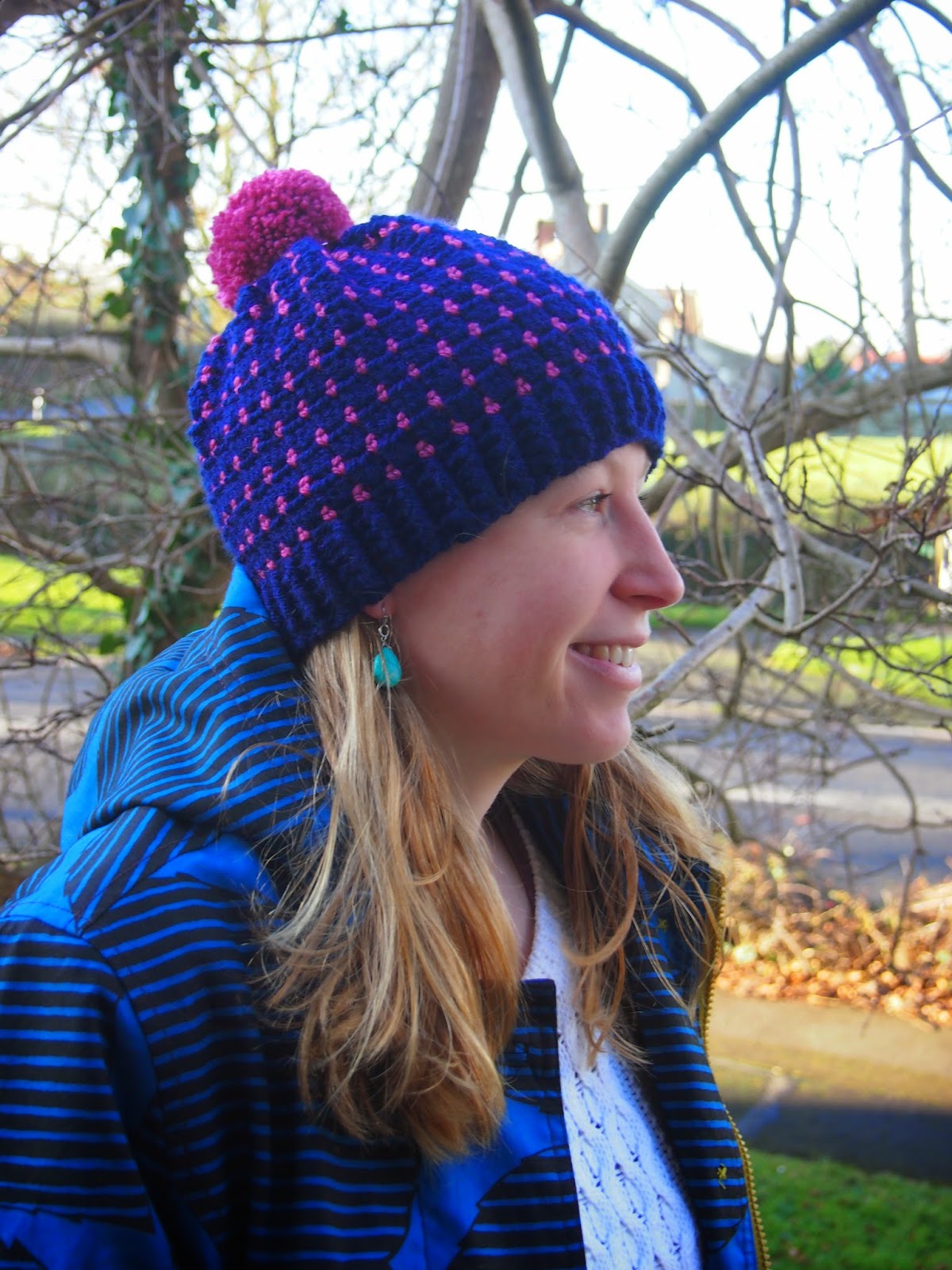 I had a slight initial false start involving me trying to run before I could walk with a new stitch (foundation trebles, in case you're interested), but after I read through the instructions in the book again I conquered the problem, and then everything else went swimmingly. The yarn I used is Stylecraft Special Aran in navy and raspberry. I think if I'd used the recommended yarns, I might have achieved the slightly more slouchy effect shown in the photos in the book but I'm happy with how the hat turned out (and more importantly so is my sister), so it's all good. 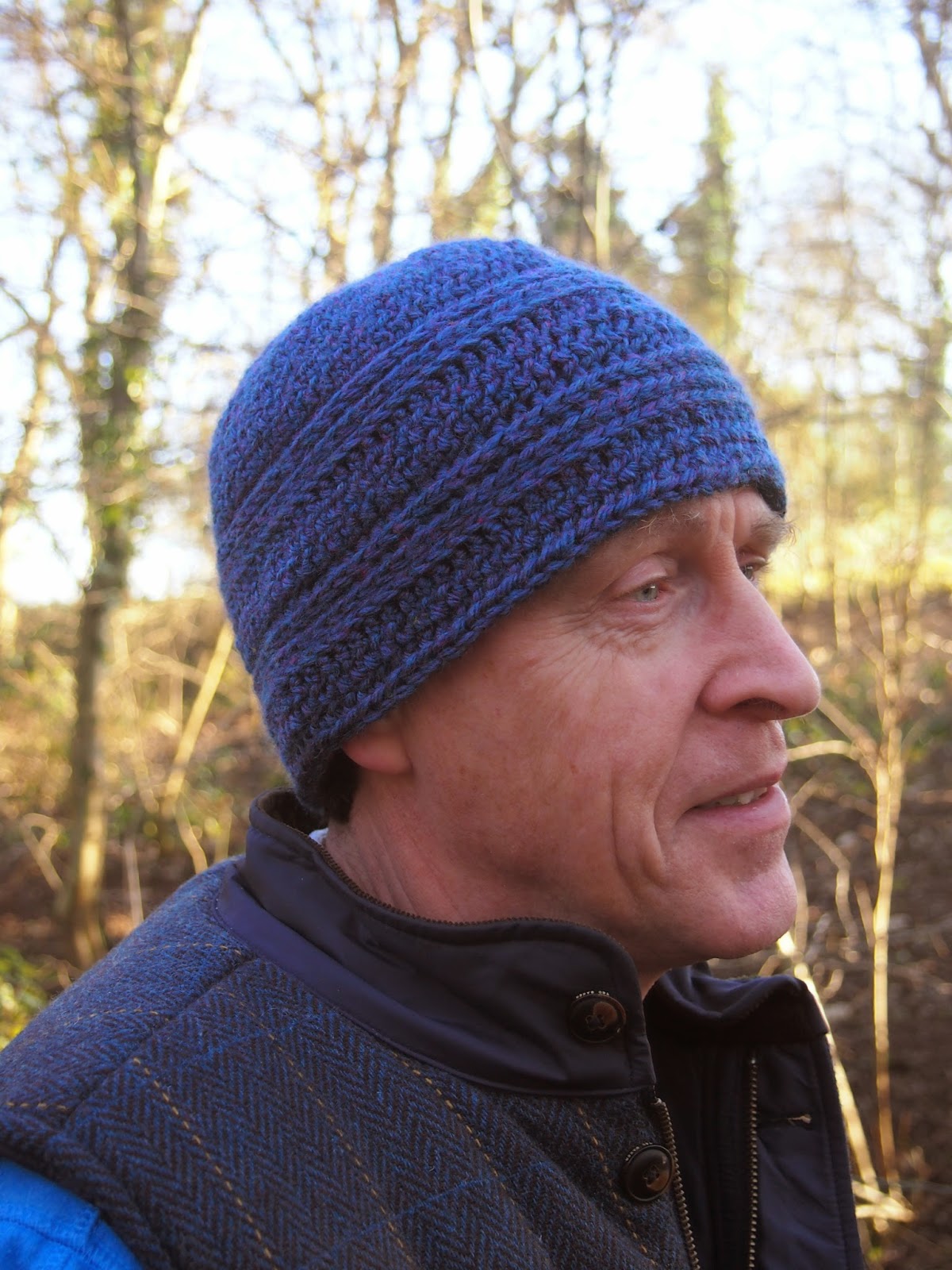 I then moved on to making the Knitterly hat from the book for my Dad. Now, either the book is really generous with its yarn amounts or I somehow managed to make the hat with way less yarn than I was meant to. So much so that when I was nearly finished the hat intended for my Dad, I realised that I'd easily have enough to make a matching hat for my little nephew. Then I decided that it would be an even better idea to make the mini hat for my nephew, but give the hat I'd intended for my Dad to my brother-in-law, and make a third hat for my Dad. But then that would leave my brother as the only man in my immediate family without a hat, so clearly that meant that I'd need to make a fourth hat. I only decided this about 10 days before Christmas, which might not have been my smartest move, but here's the evidence that I did get it all finished.... 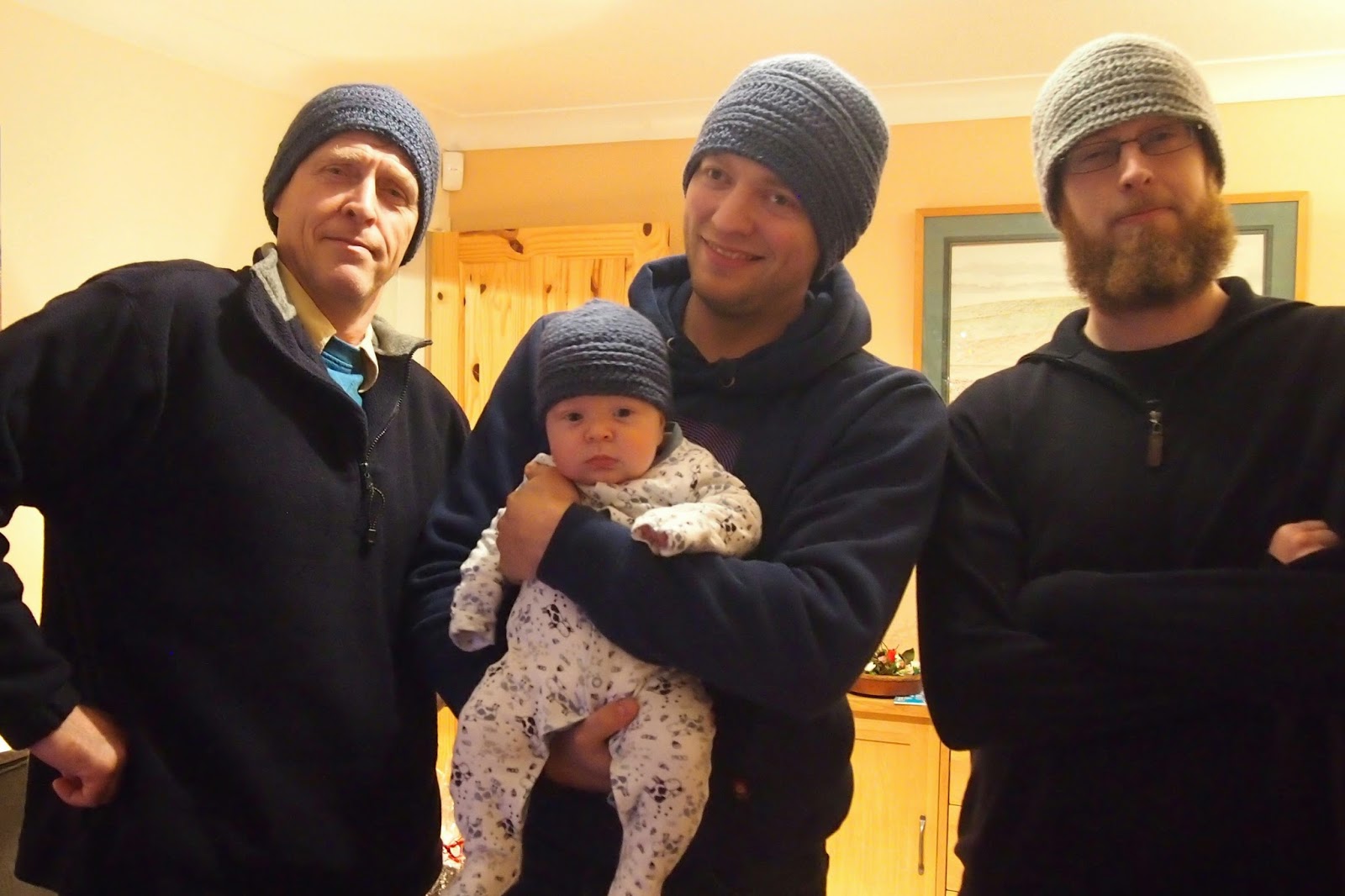 Thankfully for me, the hat is a simple but effective pattern and worked up fairly quickly. I managed to get my nephew's done in the time it took to watch Love Actually, most of my Dad's hat done on a return coach journey to London (on that point, I'm totally converted to the joys of public crafting. I've never really knitted on public transport because I worry I'll annoy whoever's sitting next to me with the needles, but crochet hooks are so much smaller that that's not a problem. And the journey went so much quicker with something to occupy me!), and my brother's done during every lunch break that I had between deciding to make it and Christmas! 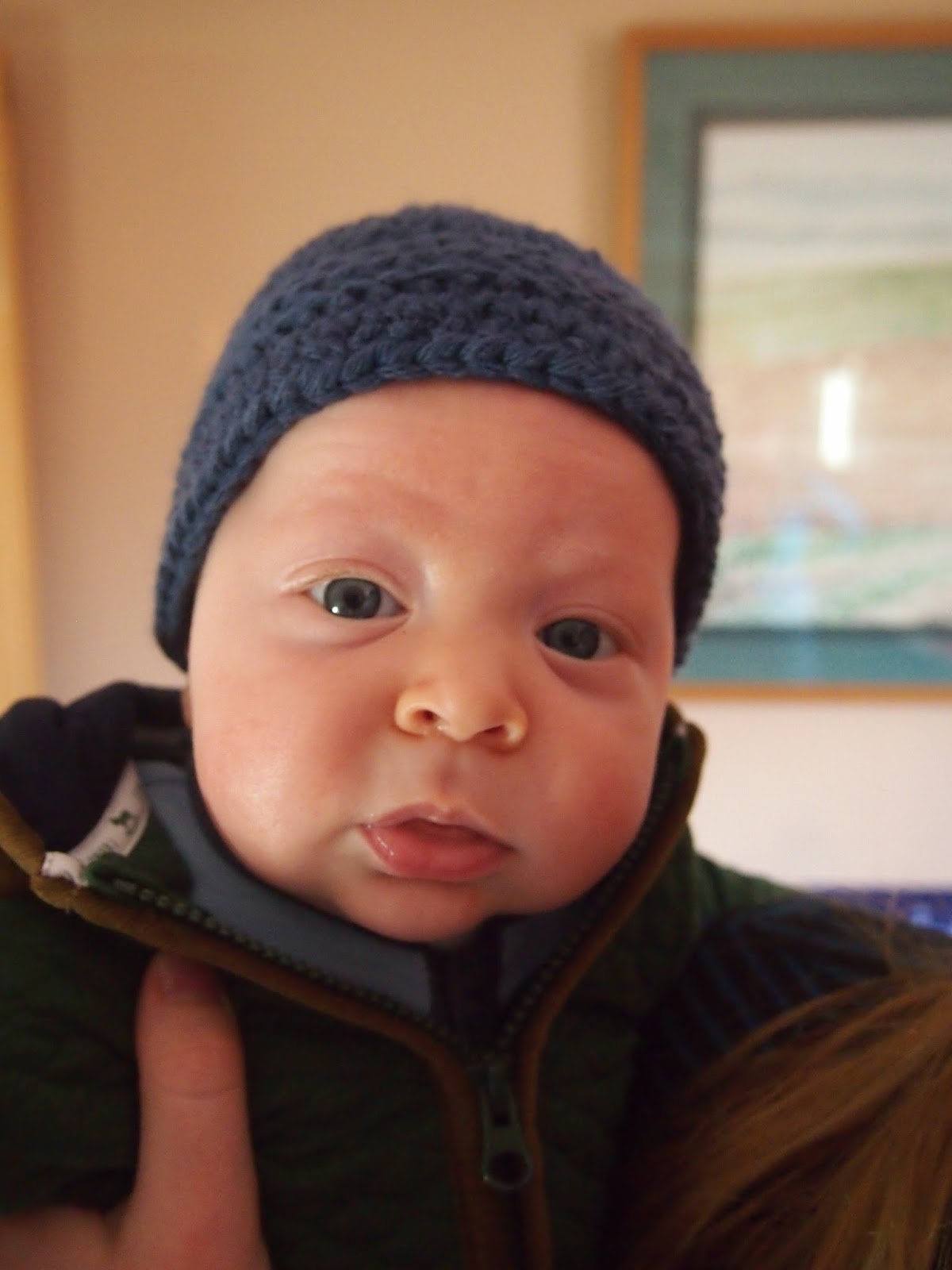 The hats for my brother-in-law and nephew were made using Wendy Mode Chunky in denim, and for the ones for my Dad and brother I used Stylecraft Life Chunky in Blue Haze and Grey. The hats seem to have gone down well with their recipients, so I'm glad that I made the effort to make them all. 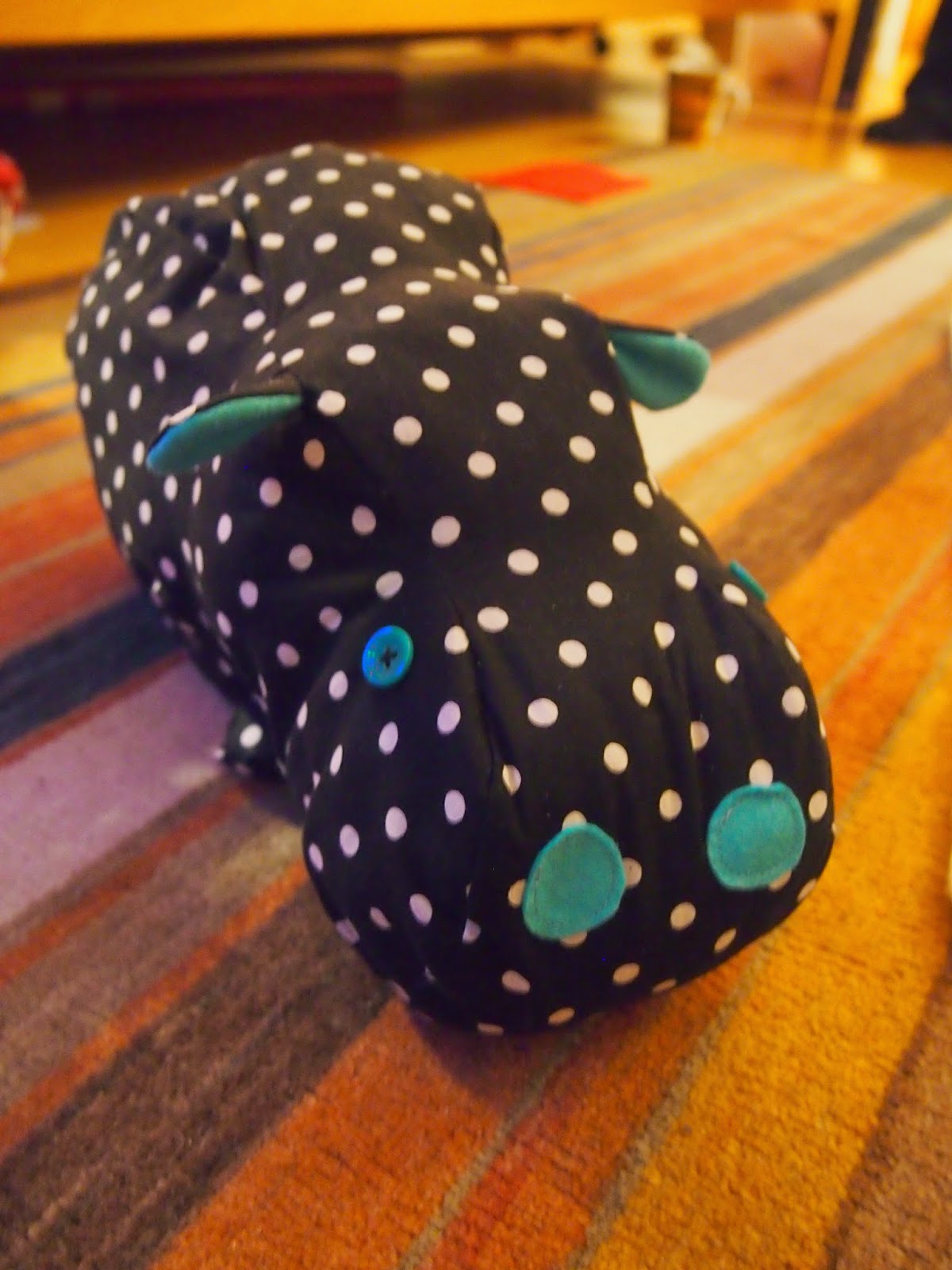 Of course, I had to fit some sewing into all of my Christmas crafting as well, and here the inspiration came from the book Sew Cute to Cuddle, which I first heard about when Charlie of This Blog is Not For You reviewed it. The book caught my attention because my brother's girlfriend likes hippos so I thought Mary the hippo from the book would be a good present for her, and it was very well received so I think I made a good choice!

The book includes full-size patterns for all of the projects to trace off, and the instructions were nice and clear. The only slight problem I had with Mary was that I failed to realise that the patterns don't include seam allowances before I cut my fabric out. Ooops! I managed to make it work though, and the only difference is that poor Mary's legs have ended up being a little shorter than they're meant to be. 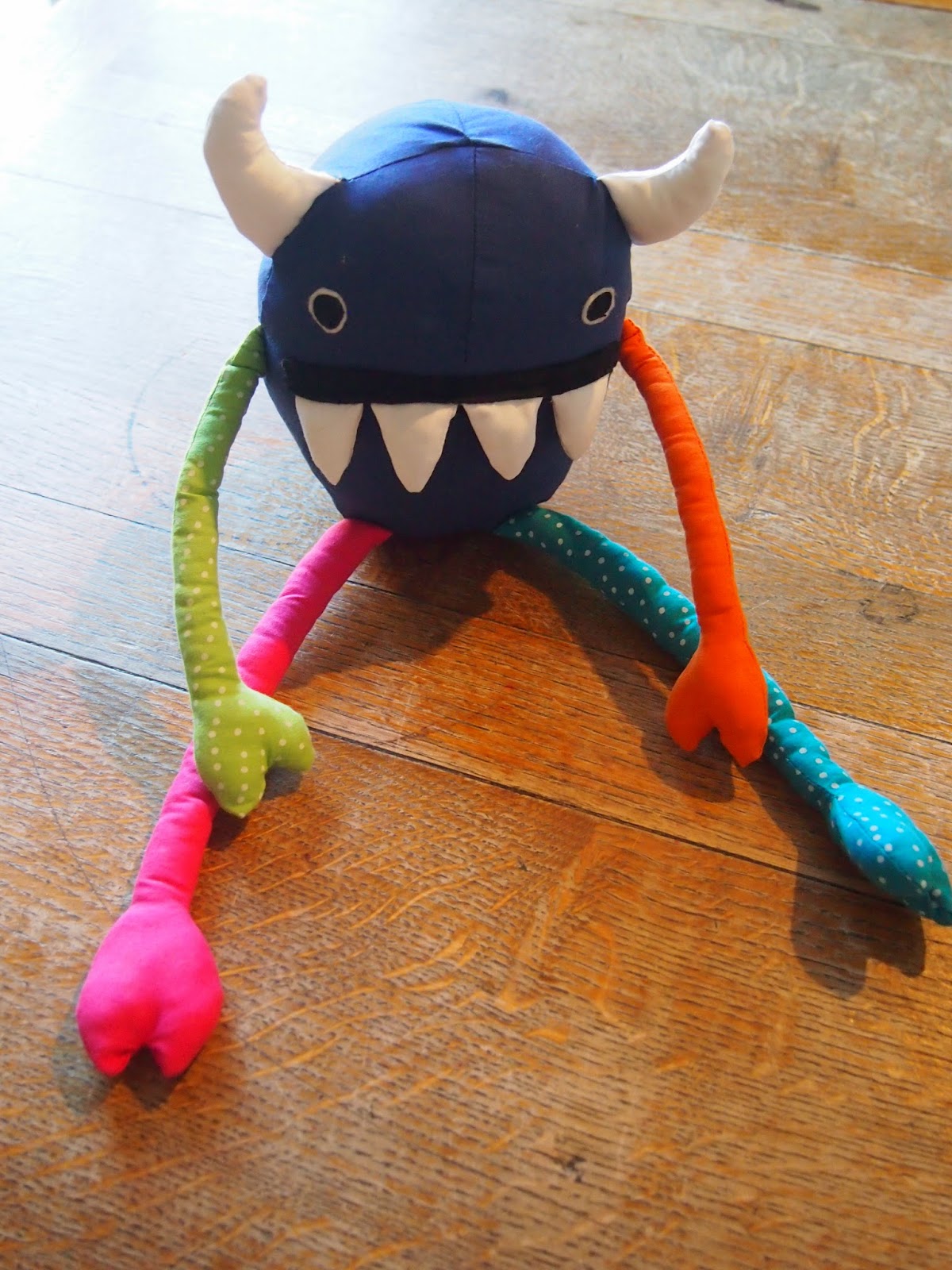 Obviously I also had to sew a toy for my nephew too, and I chose Gronk the monster. In the book, he's made up in faux fur, but I thought that cotton would be better when it's highly likely that he'll get chewed. I ended up using scraps that I had left over from a couple of fat quarter bundles that have been used for many and varying purposes over the last couple of years, and I really like the effect of the multi-coloured legs and arms.

The patterns in this book would all be pretty good for using up scraps actually - I think Mary the hippo probably uses the most material, and even for her I think I used under half a metre. The patterns were both fairly simple as well, although obviously the smaller pieces can get a bit fiddly. Other than sewing up openings for stuffing though, the only place where I had to resort to hand sewing was attaching the bottom of Mary's feet to her legs - so not too painful! 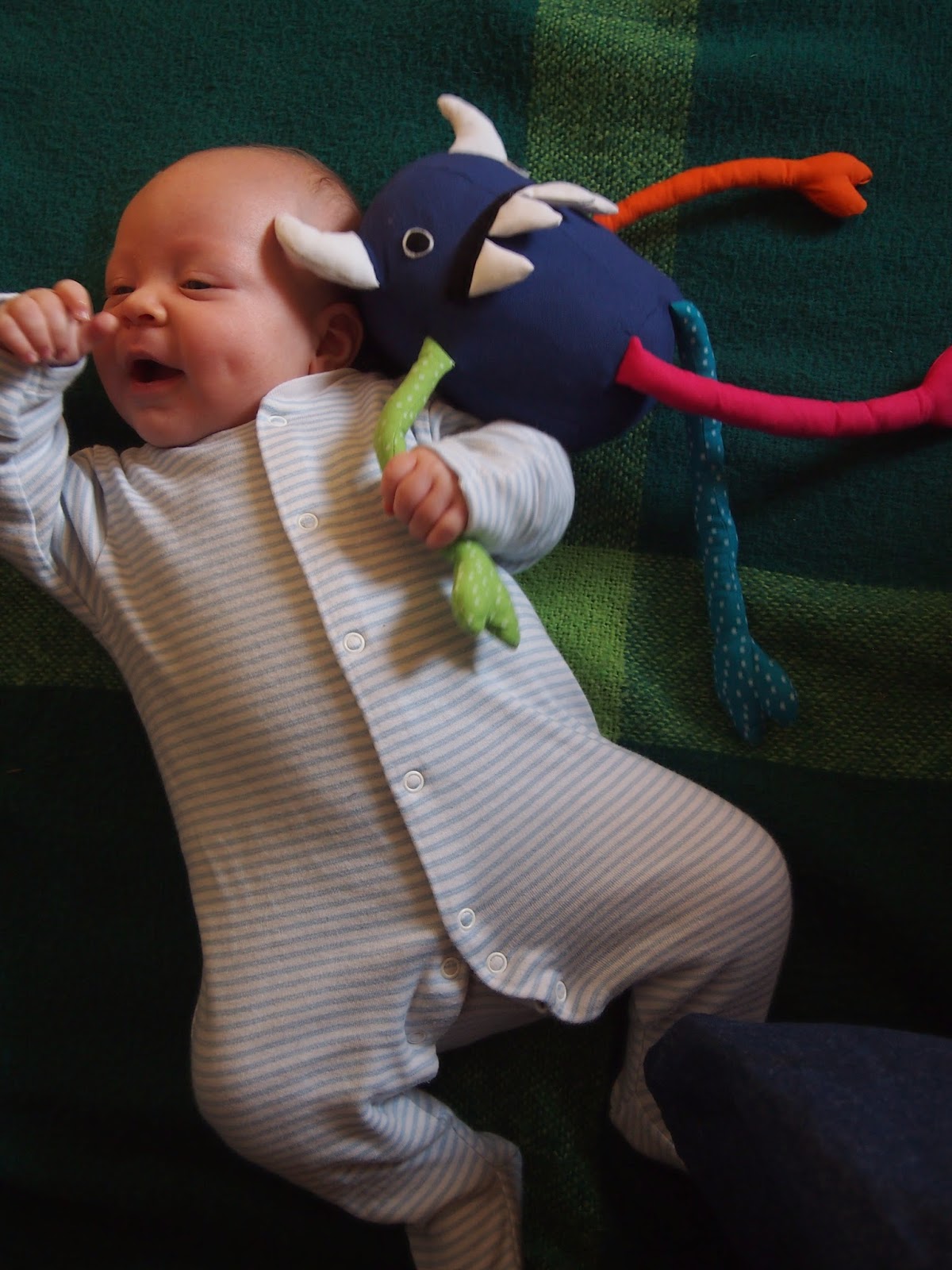 Gronk seemed to get on well with his new owner!

I mostly enjoyed making all my presents, although it did get a bit stressful towards the end - next year I need to either start earlier or not suddenly decide to give myself masses of extra work to do at the last minute (please tell me I'm not the only one who does that?!)! Now I'm looking forward to getting back to making for myself again - all I need to do now is to decide which of my pile of pre-washed fabrics to cut first. Not a bad problem to have!
Posted by Ruth - Nightingale and Dolittle at 23:07

Email ThisBlogThis!Share to TwitterShare to FacebookShare to Pinterest
Labels: Crochet, Hook Stitch and Give, Kat Goldin, Sew Cute to Cuddle