A pair of warm jersey tops

Even if I've only seen the tiniest sprinkling of snow here in Bristol so far, it's still pretty chilly so the two projects that I have to show you today seem particularly appropriate for this weather because they're both made using lovely warm jersey from White Tree Fabrics. Pair that with the Bronte and Renfrew patterns, and I now have two great new tops to snuggle up and keep cosy in! 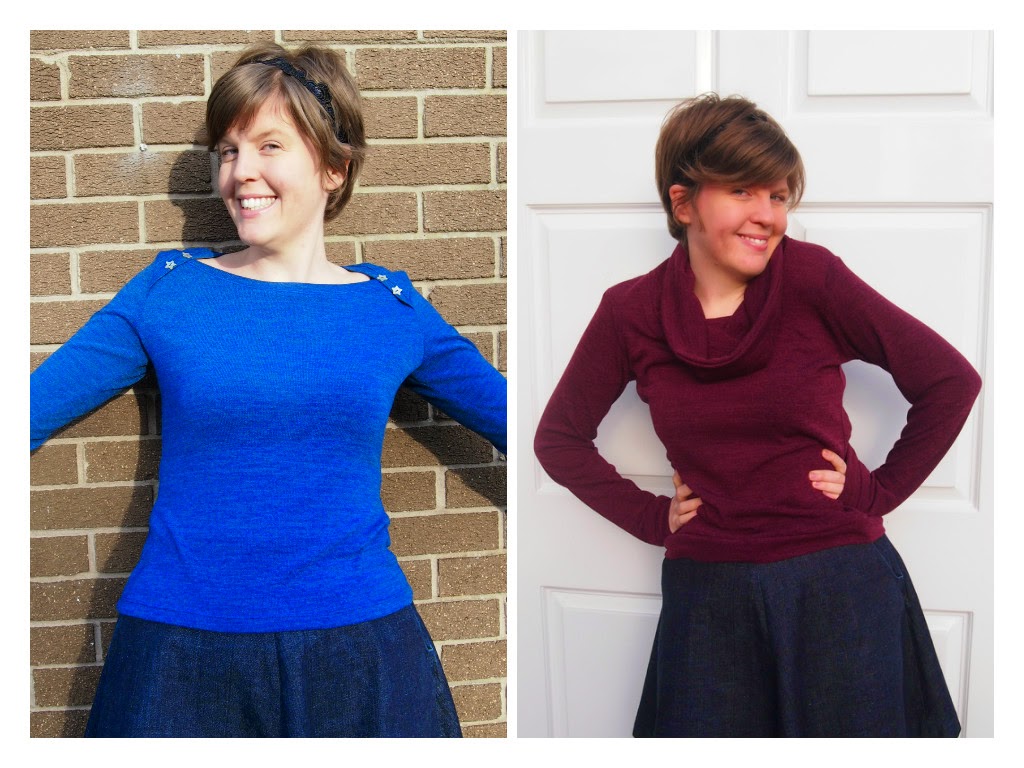 I started off with the Bronte top - I've made it twice before (here and here) and it's fast becoming a firm favourite pattern. It stitches up nice and quickly (I had this finished in an evening) and the neckline makes it a little bit different from a normal t-shirt without being any more complicated to make. 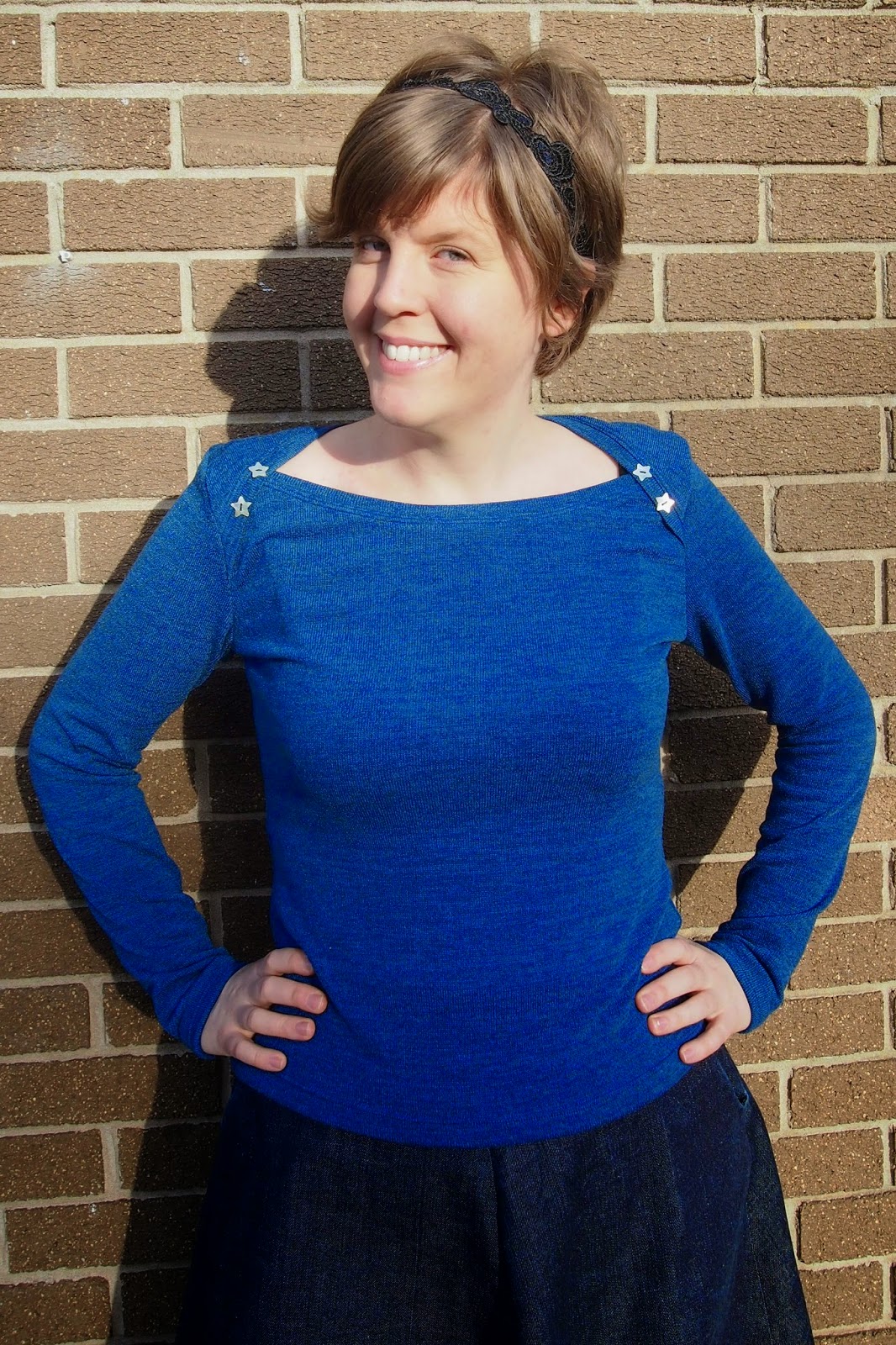 As with my previous versions, I made a size 14 with no alterations. Thankfully I managed to get through this incarnation of Bronte without nearly destroying it as I did last time, so the buttons are merely serving their purpose as intended in the pattern of holding down the shoulder overlap, instead of hiding a hole!

The buttons were actually the starting point of this project really. I love stars, so when I spotted these little pearly ones in my local haberdashery I knew I had to have some. I then dithered about what to use them for because I think the shape would make them annoying if they were functioning buttons that you needed to undo and do up all the time, but for this kind of fixed button, they're great. I wanted to use them on a plain fabric so they'd stand out, and the blue warm jersey seemed like a great match. 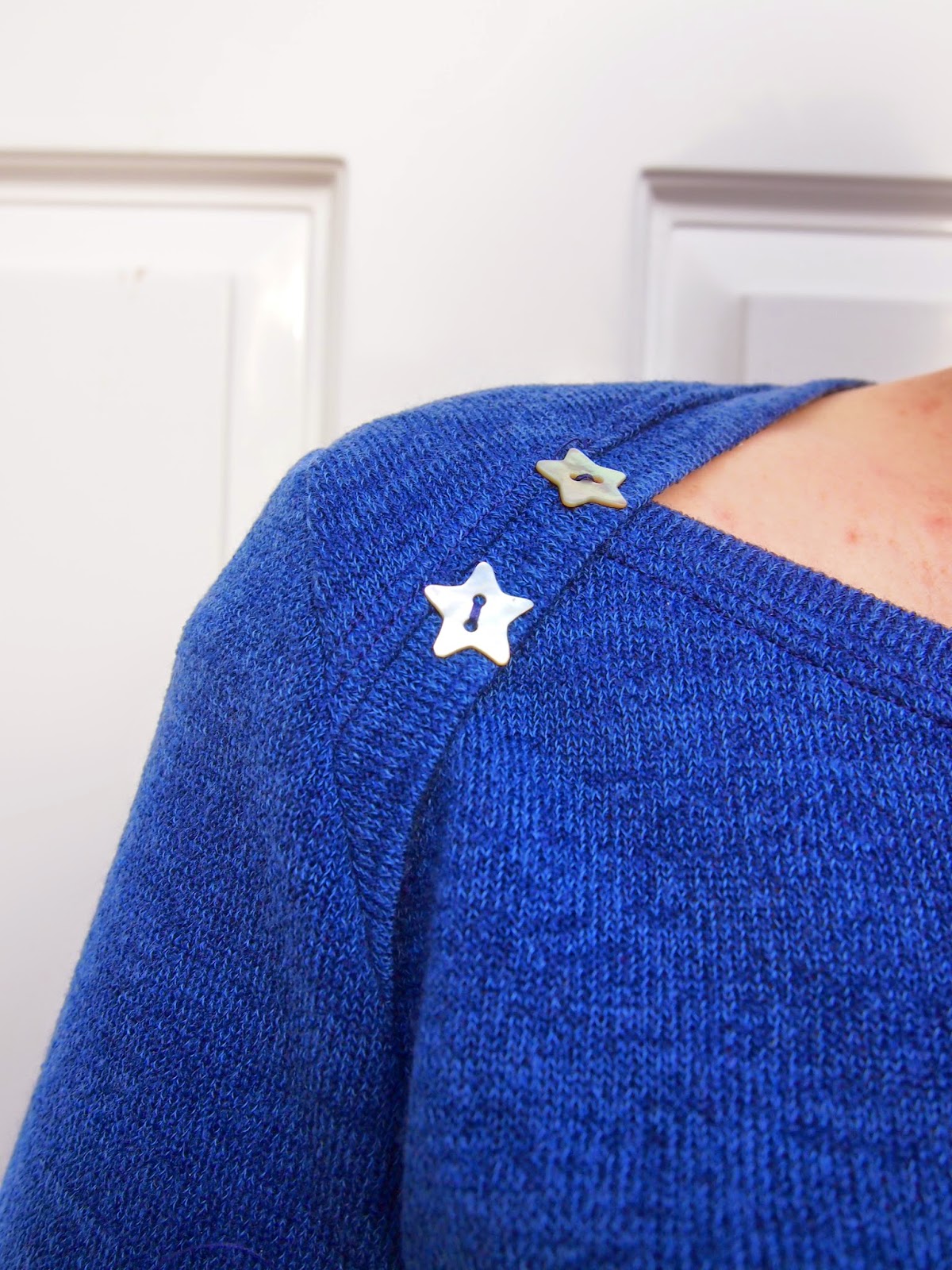 As well as the buttons, you can also see the fabric itself better here. The knits I've used in the past have been t-shirt type jerseys, but this is more like the kind of fabric that would be used for thin jumpers/sweaters. Unlike the other knits I've worked with, this fabric did shed a bit during cutting and sewing so I finished all of the seams with a zigzag stitch. Other than that, I treated it the same as other jerseys (prewashed on a normal 30 degree wash, seams using a narrow zigzag, and Bronte hems/topstitching with a twin needle) and that all seemed to work well and both of the tops have passed the initial wear test. The fabric definitely lives up to its name too - it's so nice and warm to wear. 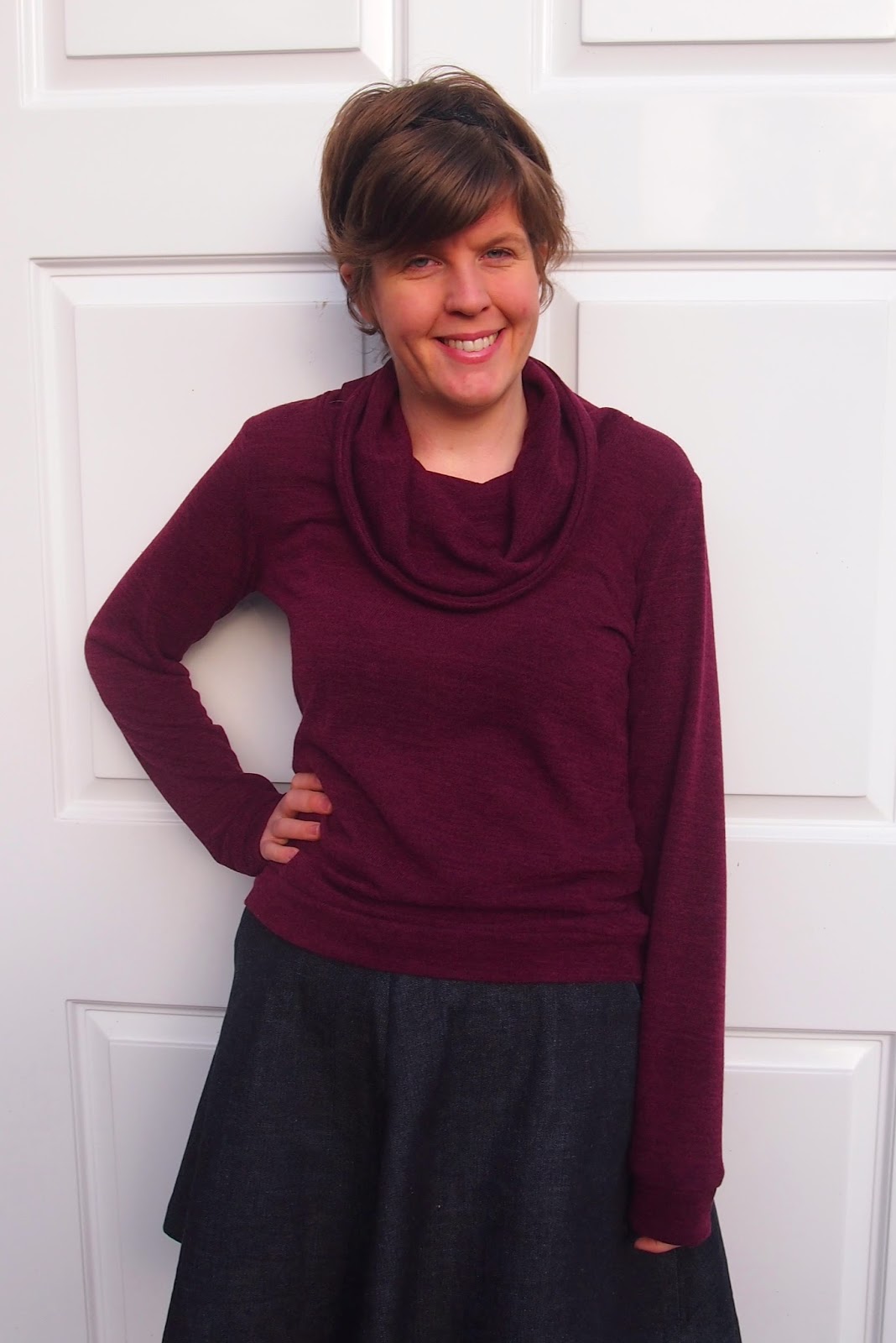 So, with Bronte finished and looking pretty, I moved on to the Renfrew and some lovely wine coloured warm jersey. This is actually the first Renfrew I've sewn and I feel like I must be the last person in the sewing community to get around to making this pattern (I'm not am I? Please tell me there's someone else out there?)! I may be late to the party, but I'm glad I got there in the end and there'll be many more Renfrews in my future. After all with all the neckline and sleeve length options, you could make loads without even repeating the same combination.

As many people have said before me, it's a great pattern, the instructions are clear and easy to follow and I really like how the body and sleeve hems are finished with bands for a slightly different effect to the other patterns I've used and most RTW t-shirts. I can definitely see why Renfrew is a TNT pattern for so many people. 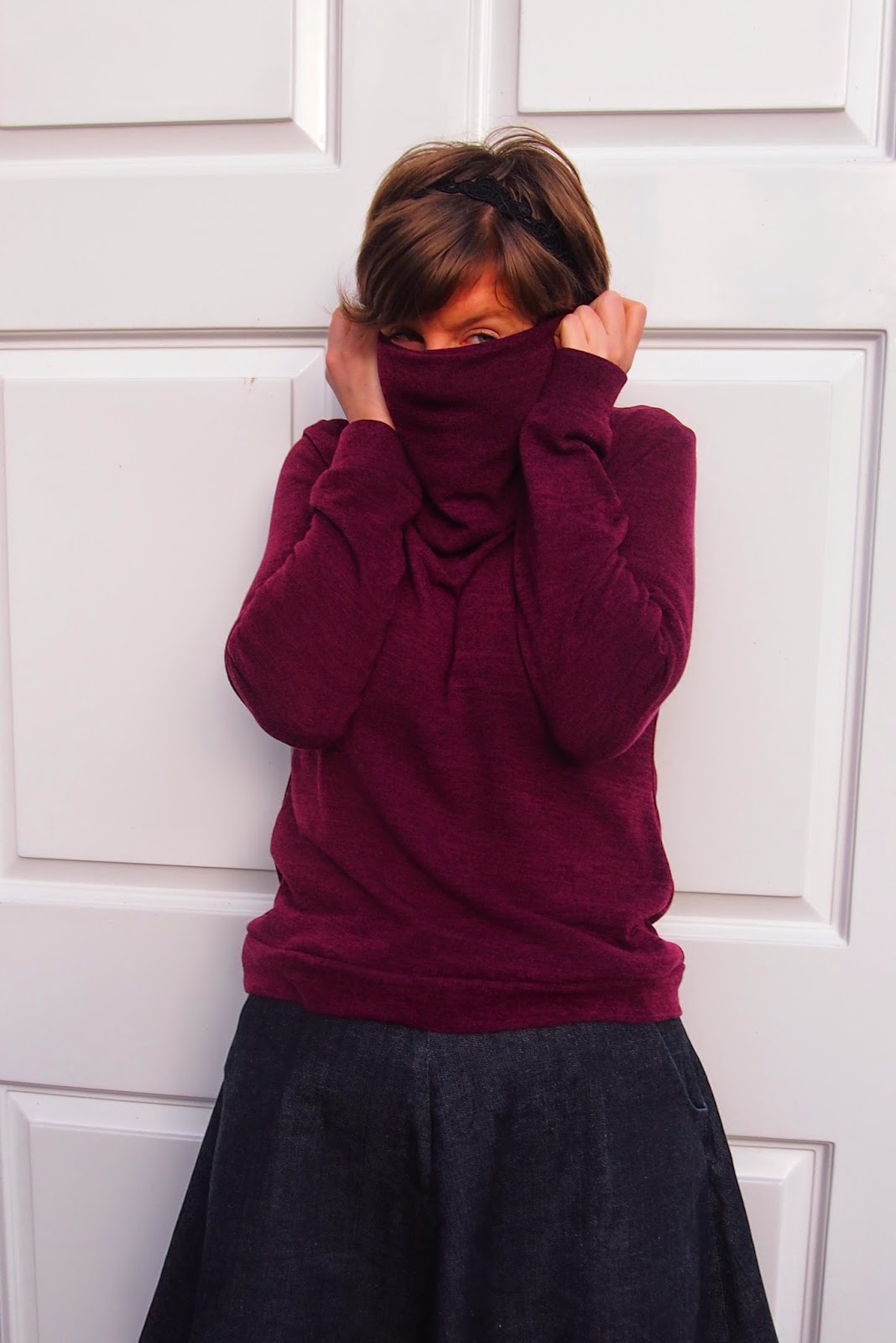 I love cowl neck tops (not least because you can hide in the cowl when you're not feeling very photogenic, which I definitely wasn't on this day!), so that was always going to be my first Renfrew neckline to try out, and pairing it with the long sleeves seemed like the obvious choice at this time of year.

I'm so pleased with how the top turned out it's definitely looser than the Bronte - my measurements are all pretty much exactly a 13 for the Renfrew (i.e. bang in the middle between a 12 and 14) so I erred on the side of caution and went for a 14. I possibly could have got away with a 12, but I like the looser fit, which combined with the fabric makes it feel more like a sweater than a t-shirt. Next time I make a Renfrew, I might go down to a 12 - or if I'm using a tighter-fitting fabric I might stick with a 14 and see how that goes. 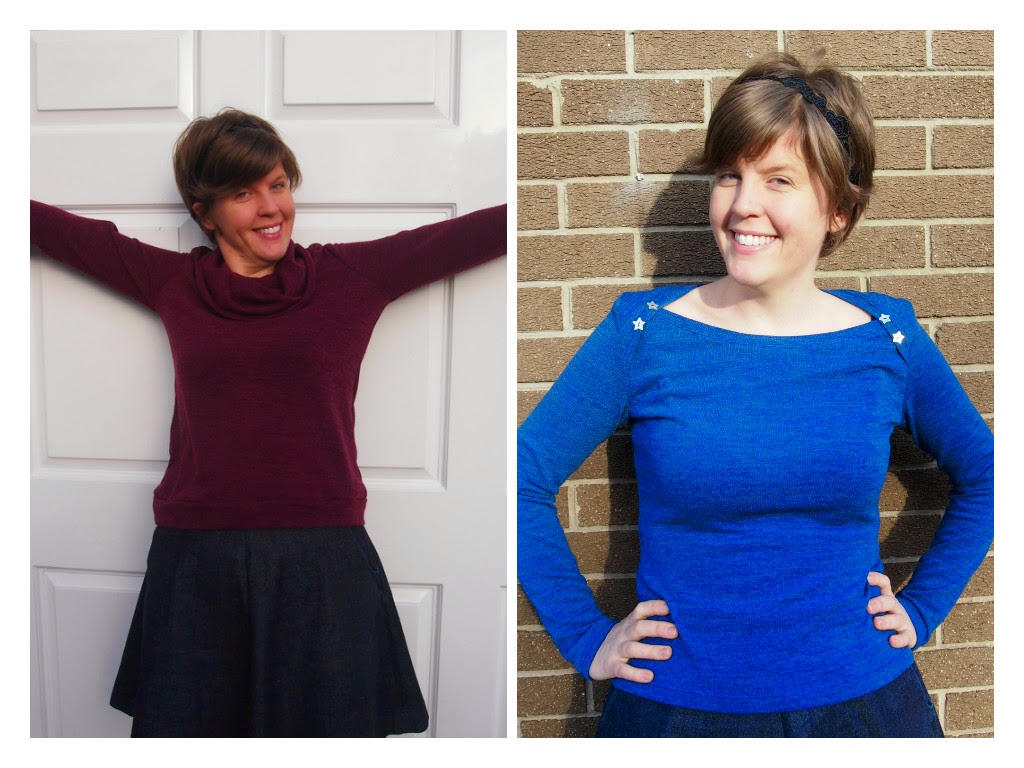 All in all, I think these two tops are a very good start to my sewing for 2015 and I can see them both getting a lot of wear. I'm glad that I've finally got round to making a Renfrew so that, combined with Bronte, I've now got 2 t-shirt patterns I know I can trust. The fabric is lovely too, and I've just realised that it might make a really nice version of the Oslo cardigan from Seamwork, so I might have to treat myself to some more soon. I'm telling myself that it would be justified because I recently realised that moths had attacked one of my favourite cardis, so surely I need a replacement, don't I?!
Posted by Ruth - Nightingale and Dolittle at 22:56