I should probably start by saying that I apologise in advance if this post is a bit overly enthusiastic and full of photos, but this project is the creation that I'm prodest of to date. I give you my version of the Colette Patterns Anise jacket... 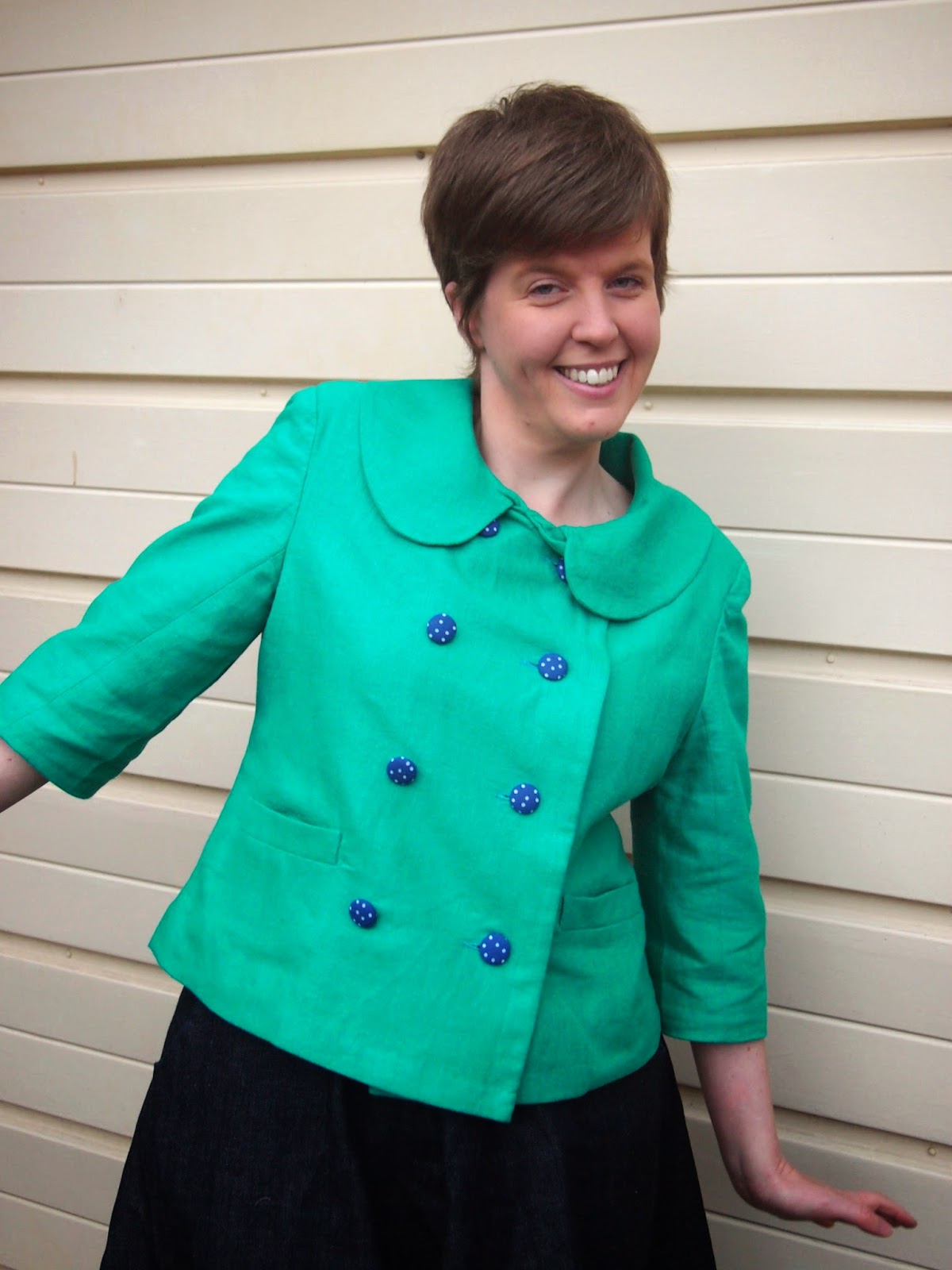 I decided a few months ago that I wanted to try to make myself a jacket, mainly because I'd been looking at the Boden catalogue and was inspired by all the nice coloured and patterned jackets in there. I then spent a couple of weeks wondering whether my sewing skills were up to making a jacket yet, and debating between which pattern I wanted to make. I changed my mind a few times, but I kept coming back to the Anise - I really like the collar, and I thought the short length would be good with all my skirts and dresses, so I took the plunge and went for it. 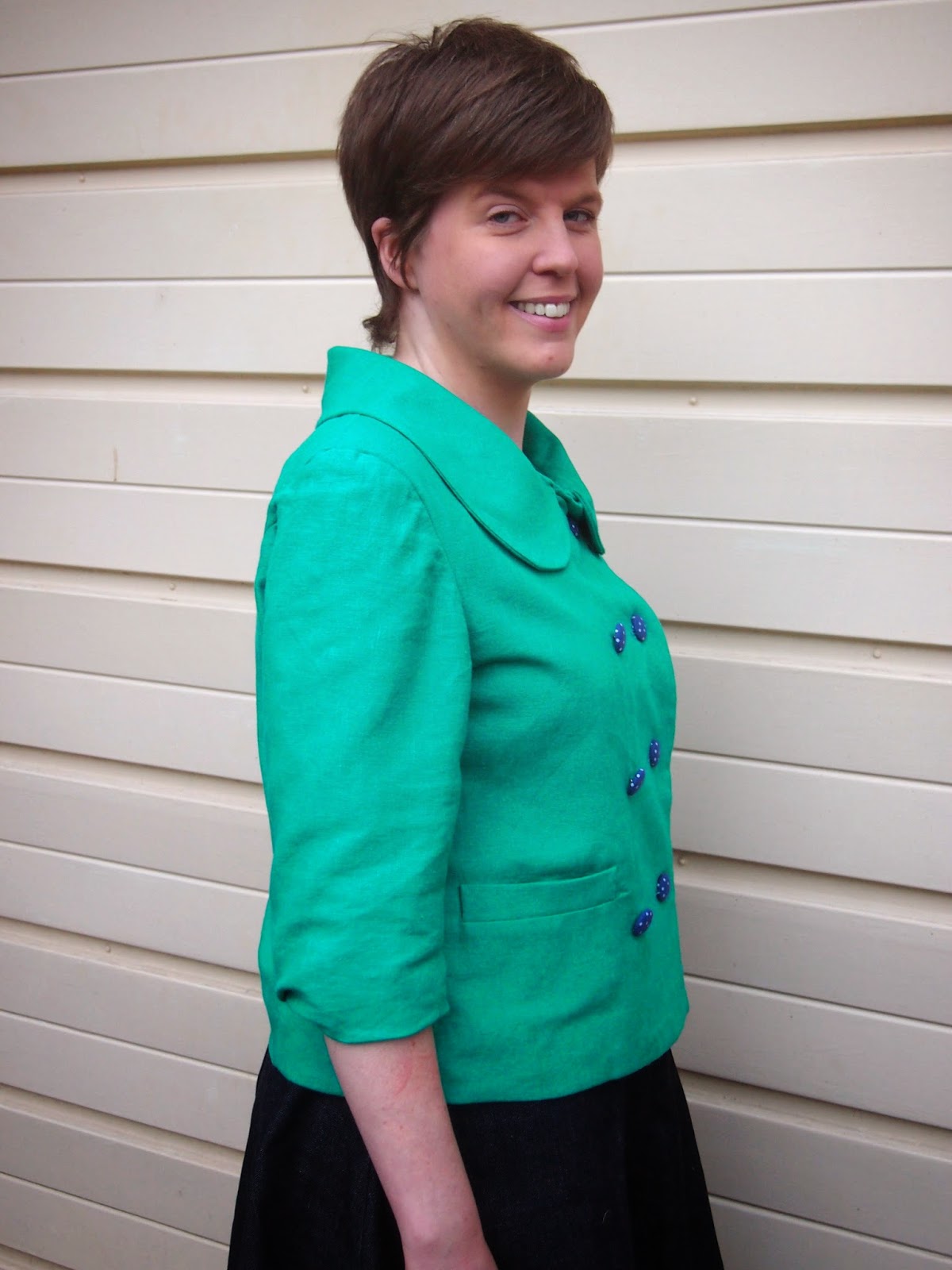 As well as the pattern, I bought the Anise Companion and I think that was definitely a good move. Like all Colette patterns, the instructions and and diagrams that come with the pattern itself are great, but the Companion and all its photos were a great reassurance and helping hand with the slightly more complicated steps (mainly welt pockets - not nearly as scary as I thought they might be!). I'd definitely recommend the Companion to anyone thinking of sewing the Anise who isn't familiar with all of the techniques already.

I also liked the fact that the Companion was divided into 8 separate sewing days, which made everything seem more manageable - there are quite a lot of steps that go into making the jacket so it was nice to be able to cross them off the list section by section and feel like I was making good progress. I decided at the start that I'd take the project slow and steady and not rush it, and save working on the jacket for times when I could concentrate on it properly, so I also made up a couple of more simple projects along the way for when I wanted some sewing that I didn't need to think about so much. 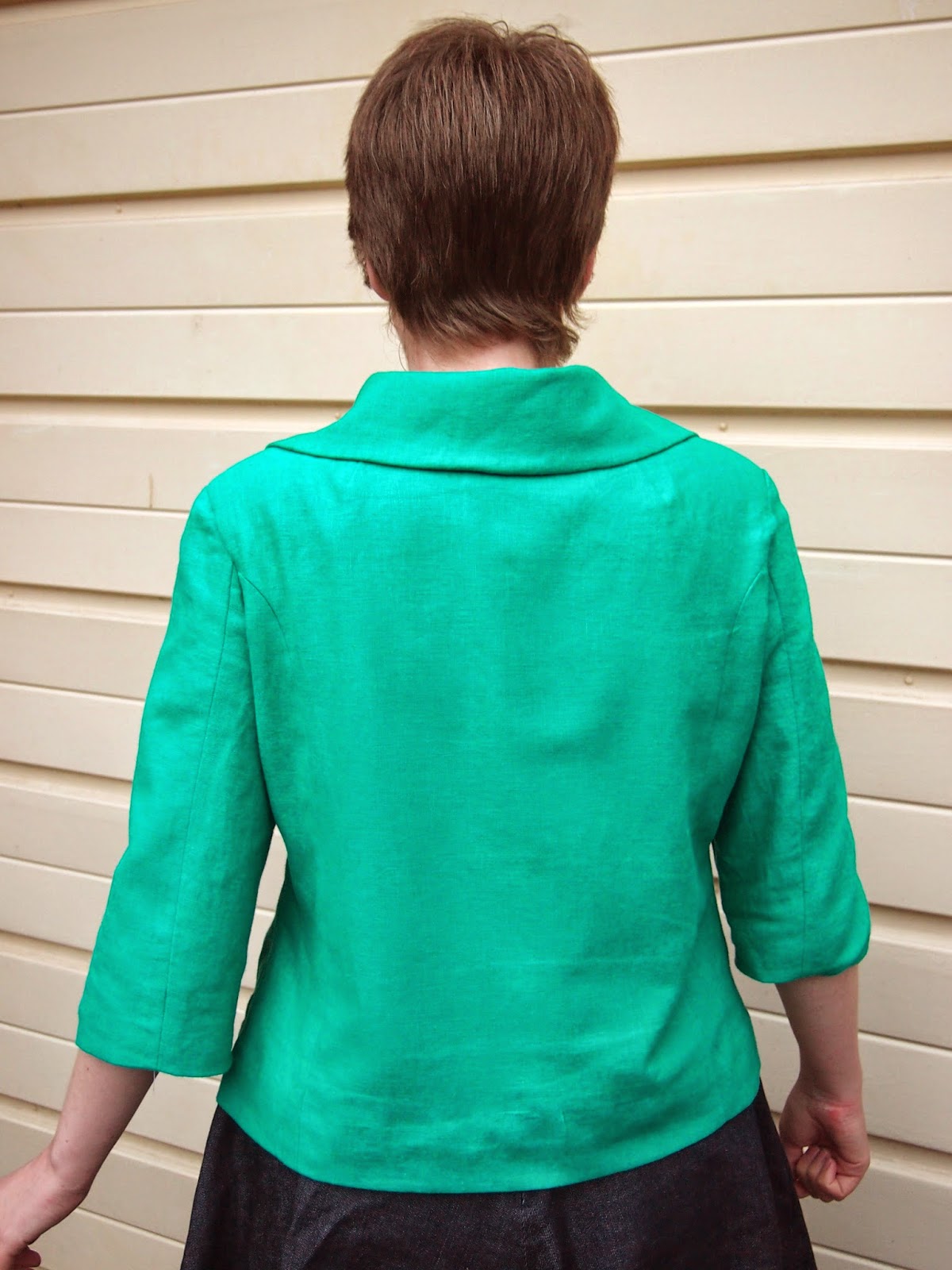 I'll be honest and tell you that it wasn't all plain sailing - with the outer fabric, lining, underlining and interfacing, cutting out all the pieces took ages (although it may have seemed to take longer than it actually did because I told myself I WAS going to cut it all out in one evening, maybe if I'd stopped when I got tired and carried on the next day it would have been better!), and I found attaching the collar a bit fiddly and actually ended up handstitching a small part of that (but I can't remember why now because it was a while ago I did that - should keep notes during long projects!). There may also have been an incident (entirely down to my stupidity!) where I started stitching one of the buttonholes the wrong way and then had a fight on my hands to pick the stitches out of the linen! Overall though, everything went together really nicely and I didn't feel out of my depth, even though I don't have a massive amount of sewing experience.

I made a straight size 10 without making any alterations at all, and I'm pleased with how the fit turned out. My measurements put me somewhere between a 10 and a 12, and if I'd been making this as a winter jacket, think I would probably have gone for making the 12 instead to allow space for extra layers, but I think the fit has turned out just right for a summer jacket. 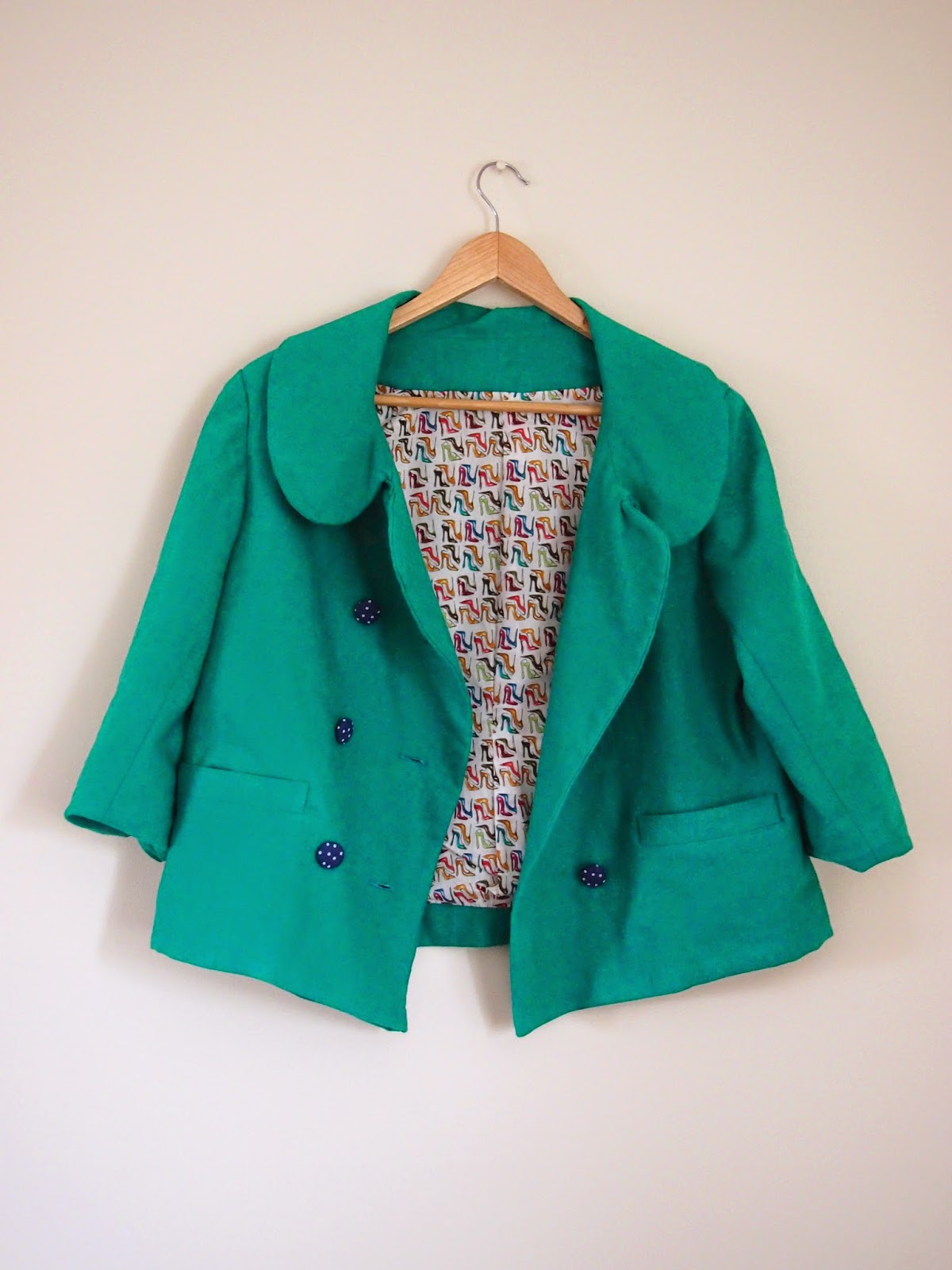 I made the jacket using a lovely jade coloured linen that I got from Calico Laine. I was originally going to make the jacket in a patterned fabric, a la Boden, but then decided that I would get more use out of a plain coloured jacket, and that if I was going to spend all the time making a jacket then it would make sense to make something that I would wear a lot. I'd usually go for blue over green, but this is a lovely shade and goes with lots of my wardrobe so I think I made a good choice. And as you can see above, I used some fun patterned fabric for the lining. 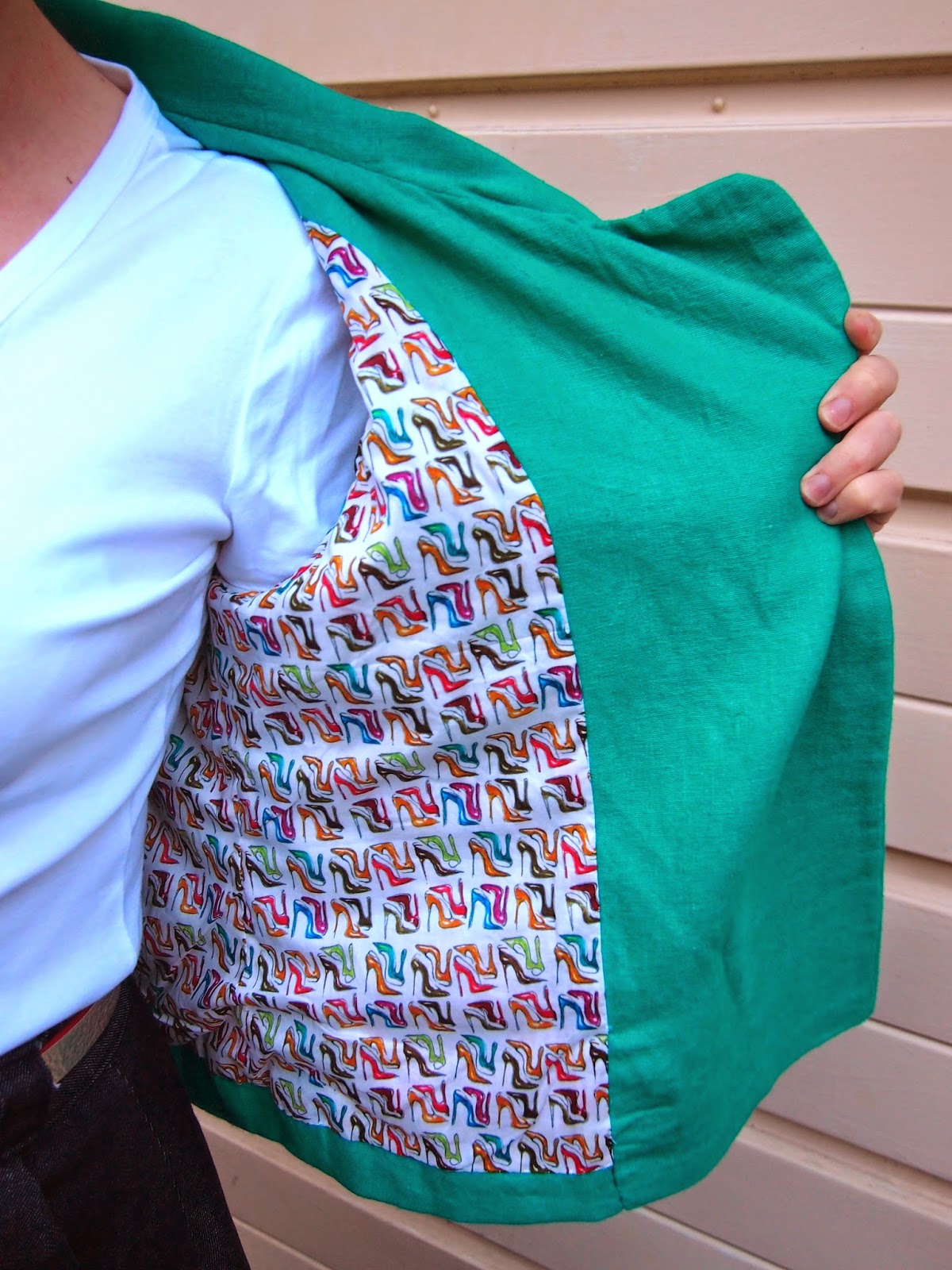 My lining is a lovely Liberty lawn that I got for a bargain price on ebay ages ago. It had been sitting around being neglected for a while because I wasn't sure what to make with it, I love the print but it didn't seem right for tops or dresses, or at least not right for me, but I love it as a jacket lining. Cotton lawn isn't one of the recommended lining fabrics, and I'm not sure if it would be a good idea for a jacket that you'd be wearing with layers underneath, but I think it works well here as I'll mainly be wearing it with short-sleeved or sleeveless summery clothes. It's worked fine so far anyway! And it's pretty! 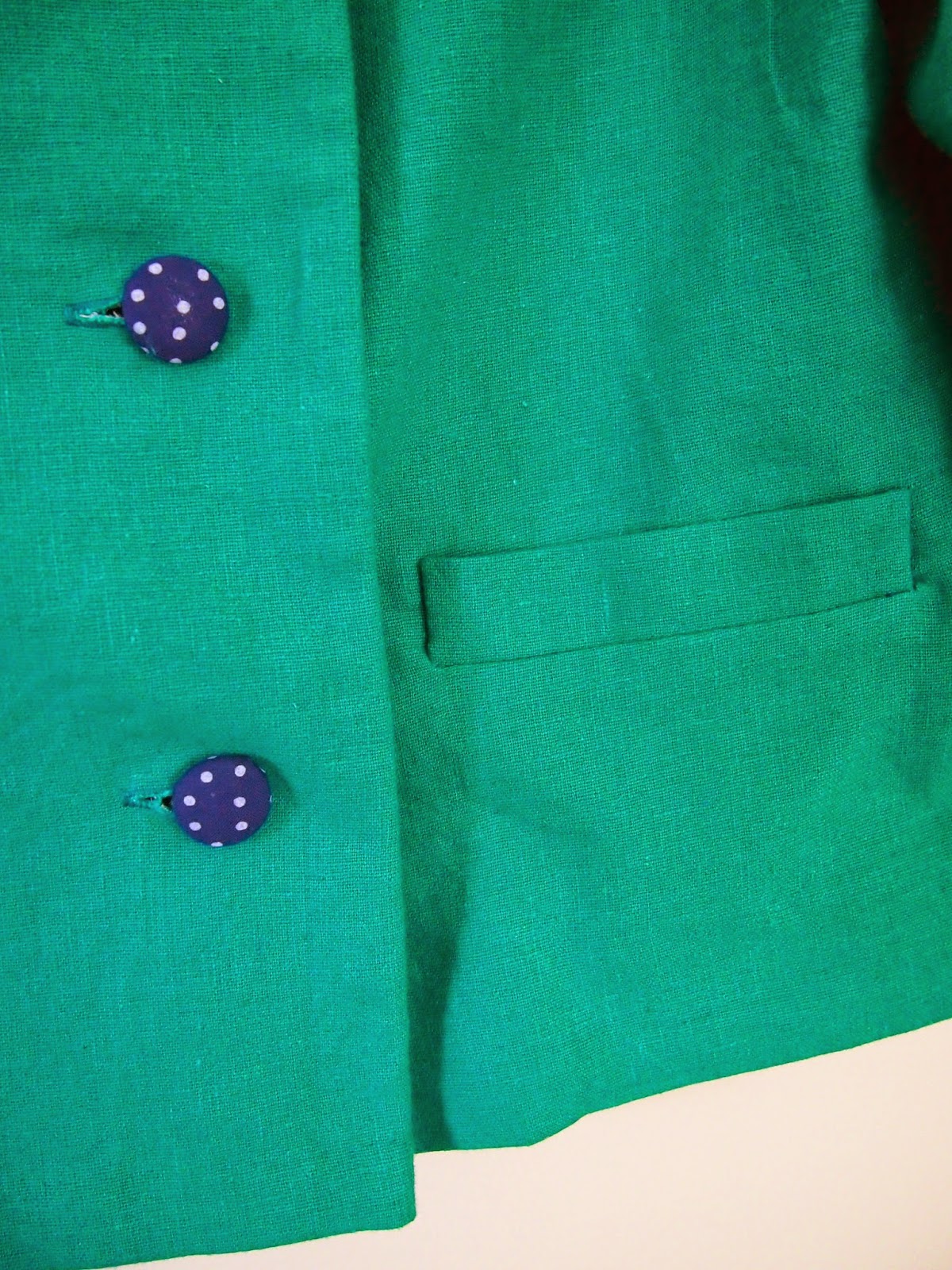 A little detail shot for you! I'm really pleased with how the welt pockets turned out - cutting into the middle of the jacket fronts was slightly scary, but with the Companion by my side it wasn't complicated, and it all turned out fine.

The Companion has instructions for making bound buttonholes, but I decided to stick to normal buttonholes this time. I think they work fine with the linen, and I already had quite a lot of new techniques that I was trying for the first time in this project, so I thought I'd save bound buttonholes as something new to try another time! My buttons are self-cover buttons covered with some cotton that has been in my stash for a while. 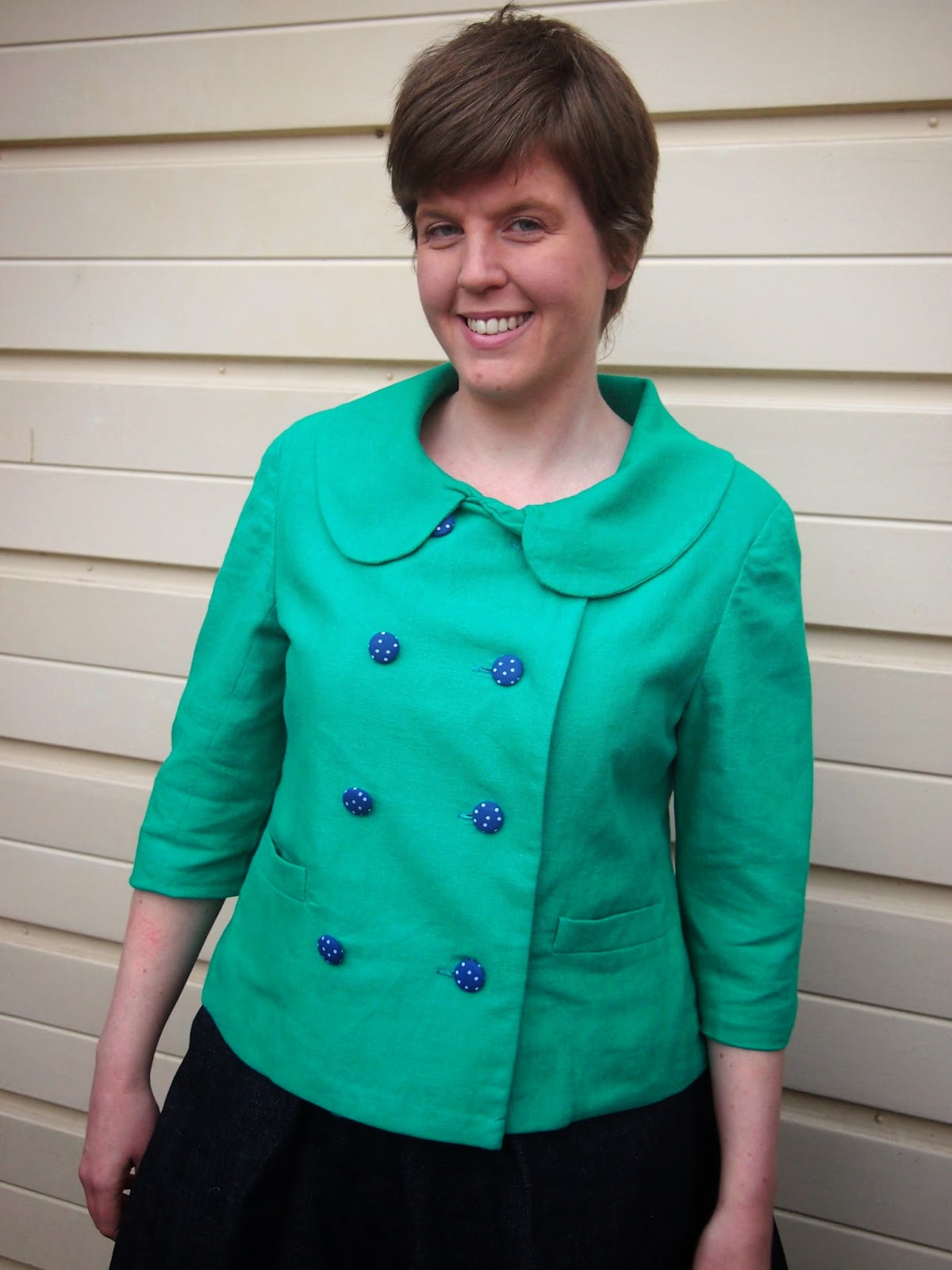 Overall, as you can probably tell, I'm really happy with this one! I enjoyed the process of making my Anise - it did take longer than whipping up a simple dress, but I got a great sense of satisfaction when I finished each stage, and especially when I finished the whole thing. I know it'll be a great wardrobe staple, and I'm looking forward to showing it off when the dismal weather we're currently "enjoying" goes away!
Posted by Ruth - Nightingale and Dolittle at 13:11