Last week I decided to be a little bit sensible and sew something that I actually needed, using material that I already owned, as a quick break from getting tempted by all the pretty dresses, shiny new patterns and colourful material. Although what I made is still pretty and colourful, so it's all good. Here's my new dressing gown... 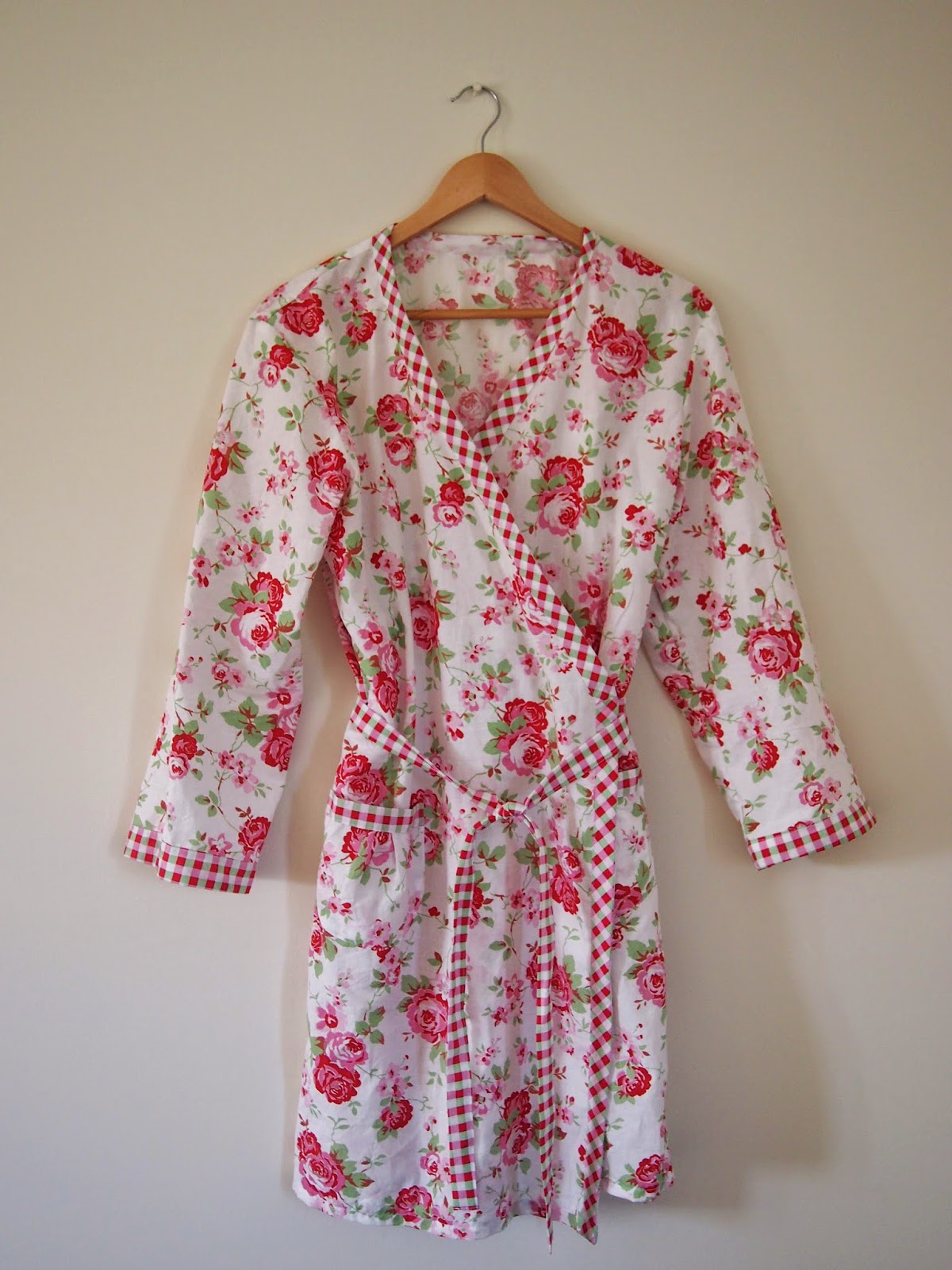 This is the second pattern I've made from the book 'And Sew To Bed' by Caro London (the first was my pyjama trousers), it's the Wrapover Short Dressing Gown. For some reason I felt a bit weird at first about posing for blog photos in a dressing gown, but then I decided that it actually covers more than some clothes so I should just go for it. But not subject you to too much of my pasty, milk-bottle legs, and definitely take the photos inside... 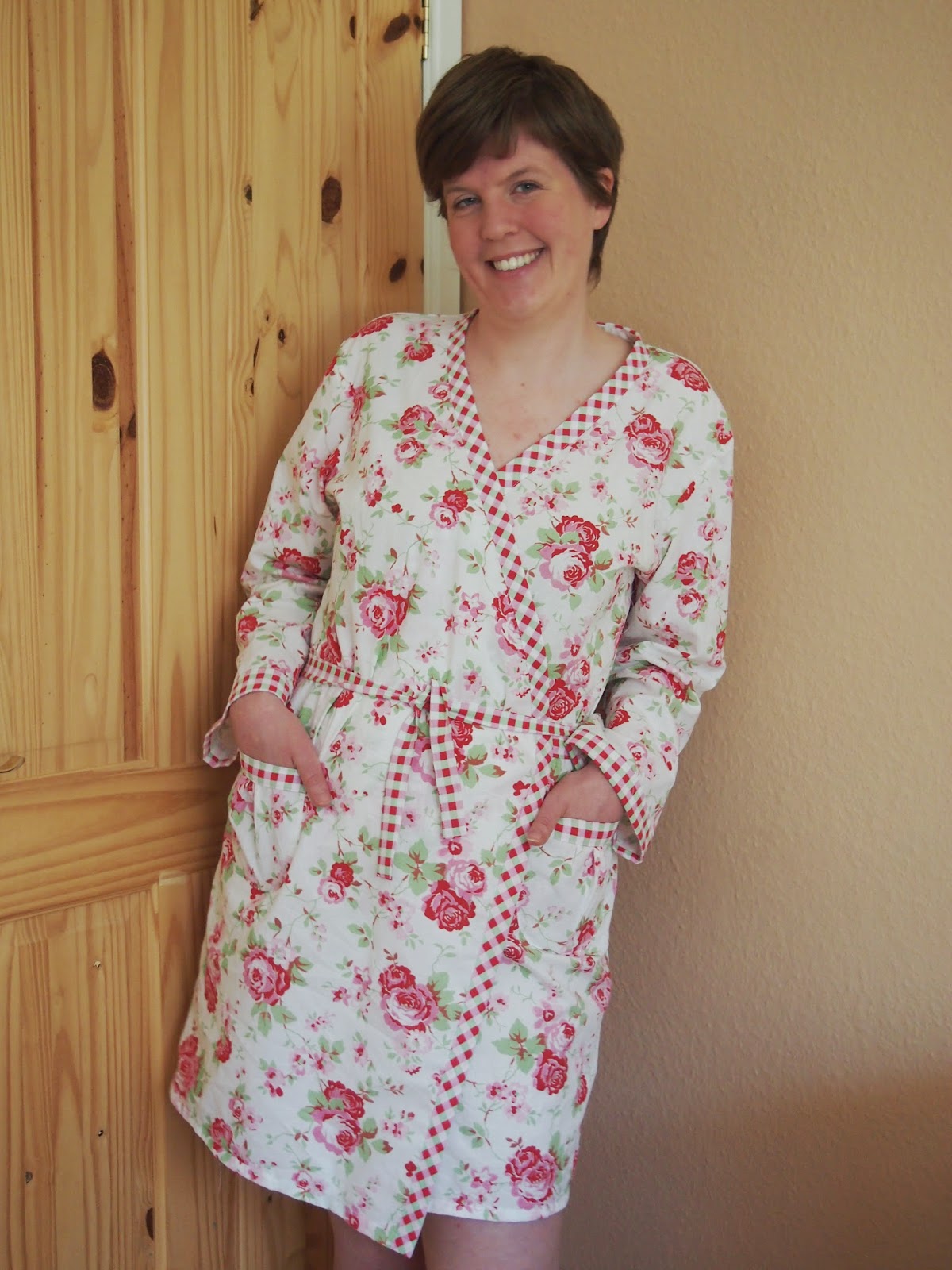 As you might have guessed from the title of this post, the material I used was actually originally an Ikea duvet cover. I bought it a couple of years ago, and it has already been used for some smaller projects (pre-blog) and there's a decent amount left still so I think I'm doing OK for the money I paid (which I'm sure was less than the current price of £20, which is still not bad!). The great bonus about using the duvet cover for this project was that the check used for the reverse of the cover gave me a ready-made contrast print which matches the colours of the rose print perfectly - yay! Here's a close-up... 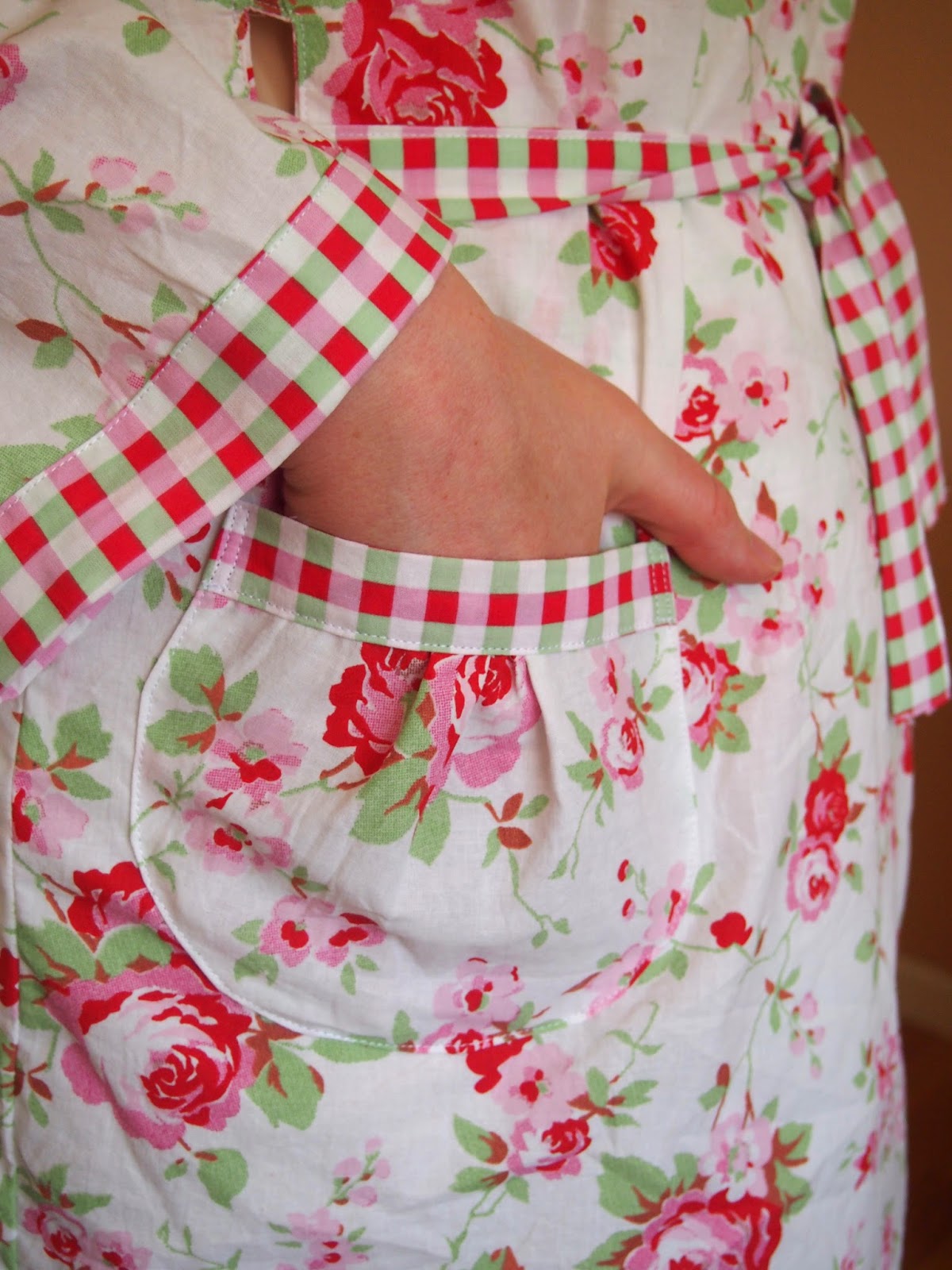 You can also see one of the cute little gathered pockets here. Constructing and adding these was probably about as complicated as this got (i.e. not that complicated), so it was a pretty quick project to sew up, after all there's no need for particularly accurate fitting with a dressing gown really is there? You might not want to do this as a first sewing project because the instructions are a little brief, but they're still clear and fairly straightforward so shouldn't be anything to trouble people with even only a very small amount of sewing experience. 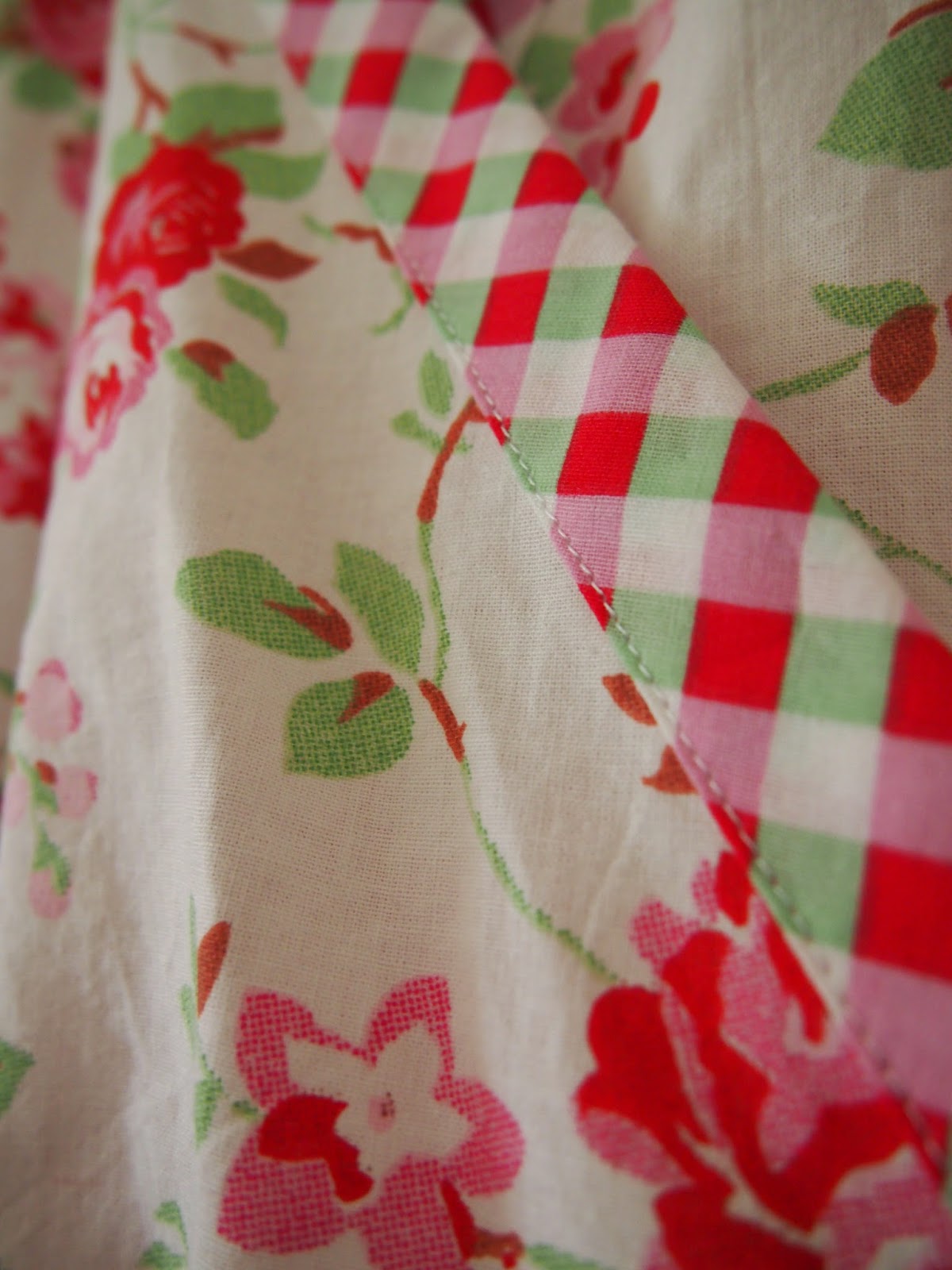 It would also be a good project to do if you wanted to practice a bit of top-stitching as you have to top-stitch all along contrast on the front/neck band, cuffs and pocket band, as well as all along the belt. My top-stitching isn't always the neatest in the world, but I took it slowly and I'm happy with how it turned out this time.

It's also a good chance to practice French seams, as they're used on all of the seams on the main material. The contrast strips are all attached and then folded back on themselves to enclose the raw edges before top-stitching too, so that combined with the French seams means the inside all looks nice and neat too! 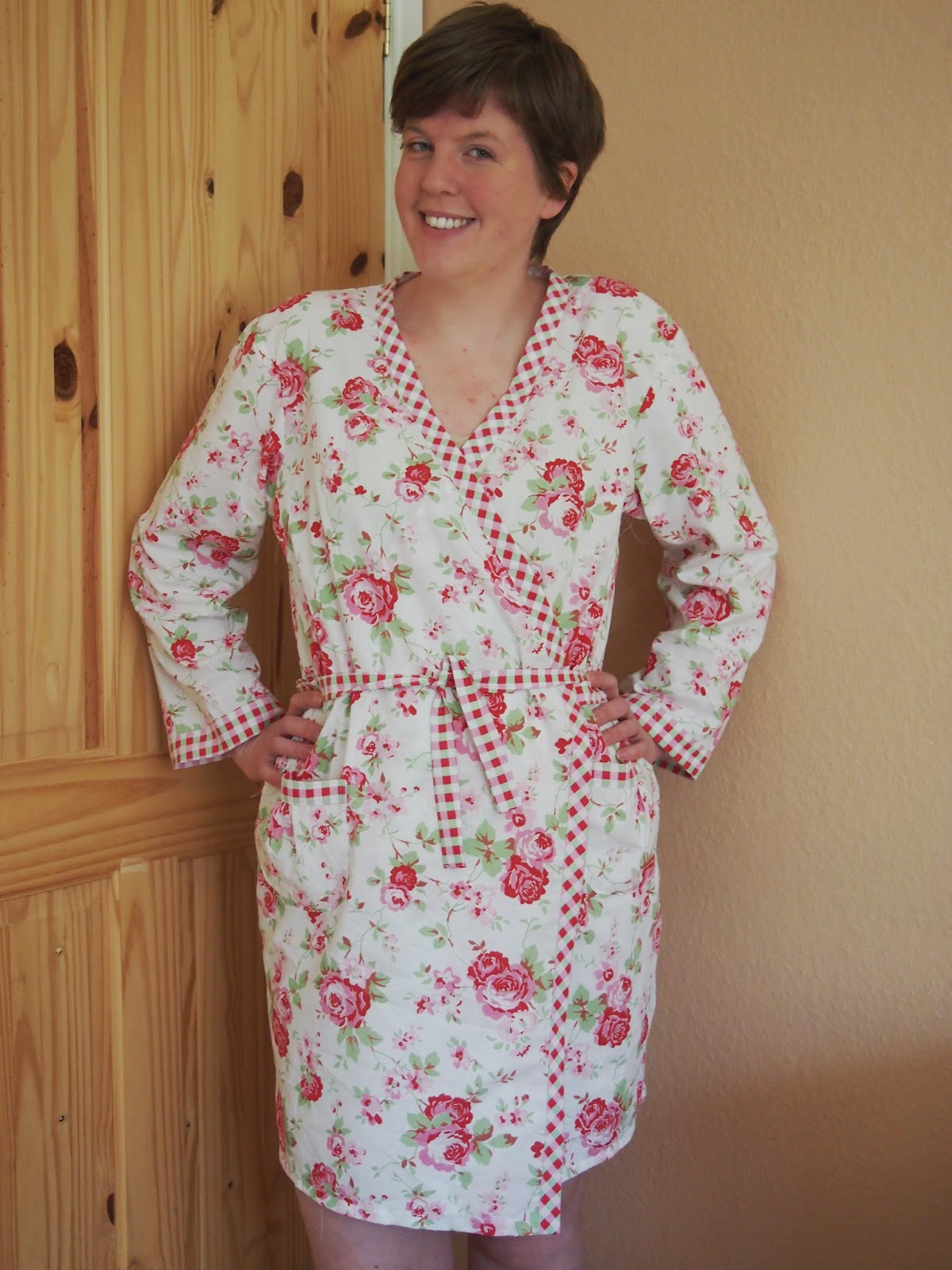 There's not much else to say about this one I don't think - it was a nice simple project, which turned out just how I hoped it would and has given me a nice new dressing gown for the warmer weather. I'm planning on making one of the other patterns from this book soon, and once I've done that I'll write a full review.

Anyone else ever made anything from a duvet cover?

Posted by Ruth - Nightingale and Dolittle at 13:19