In my life outside of sewing, knitting and general creating, I work as a freelance translator. Most of the time that keeps me nice and busy, but sometimes it means I end up with a random day when I have no work. When I first went freelance this tended to result in the onset of panic that I would never get any more work again and would end up penniless and running home to my parents, but now I'm more confident that won't happen so when I'm being sensible I see it as a chance to catch up on boring admin, but more often than not it turns into bonus creative time! The Friday just gone was one of those days, and I used it to sew up a new dress which cost me almost nothing, yay! It's a sleeveless version of the Colette Laurel dress... 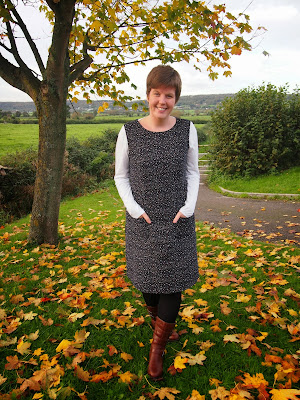 I made version 2, with the cute little front pockets, but missed off the sleeves. This was partly because I realised I had just enough of the pretty needlecord fabric left from the Hollyburn skirt which I made earlier this year to squeeze out a sleeveless version of the dress, and partly because I quite like layering sleeveless pinafore-type dresses with long-sleeved tops/jumpers in the autumn and winter anyway, so I knew it would definitely be worn a lot. 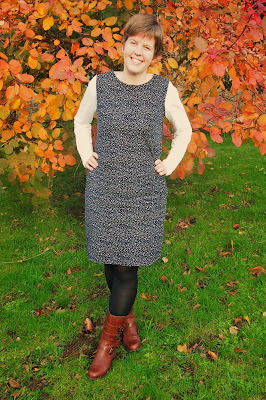 To finish the armholes and the neckline, I followed the suggestion for the sleeveless dress from the Laurel extras booklet and used bias tape to create a facing, which I machine stitched to the outside and then flipped over and hand stitched to the inside. It's not especially invisible hand stitching from the inside but you can't see a thing on the outside so it's all good in my book! 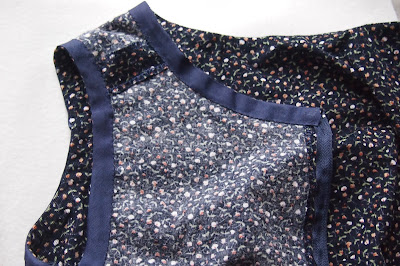 I used the same size 12 as I used for both of my Laurel tops (here and here), and then graded out to a 14 for my lovely pear-shaped hips, but as it turned out I didn't need to do that and I ended up taking some width back out of the side seams and using a slightly larger seam allowance down the centre back. If I make another dress (which is quite likely at some point in the future) I think a straight size 12 would work fine. I added a couple of inches to the length so that I could wear it with tights as well as leggings - the hemline still falls well above my knee but for some reason it looks longer in the photos!

I used a regular zipper instead of an invisible one, purely because my local shop didn't have an invisible zipper in the right length and colour combination and I wanted to buy something there and then so I could get it finished all in one day. Me, impatient?! Never! I think it works fine with this dress and material combination. 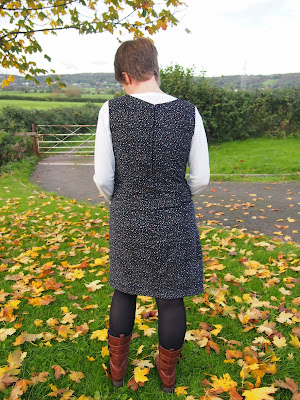 Overall, for a dress that cost me a grand total of £1.70 for new supplies (the binding and the zip), I think this is a pretty good day's work - it's a great casual dress, and nice and cosy when layered with a long-sleeved top, and really comfortable so perfect for wandering around enjoying all the beautiful colours of the autumn leaves! 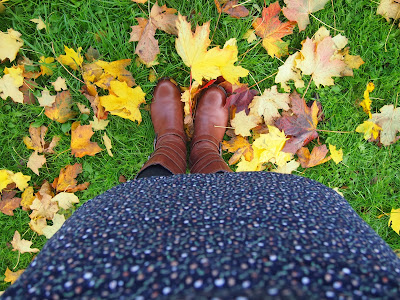 Posted by Ruth - Nightingale and Dolittle at 12:01