I've been enjoying wearing shirts recently, but only have two long-sleeved ones in my wardrobe so I decided it was time to add another to my collection. I fancied trying a new pattern, and after a bit of browsing I opted for Vogue 8772. 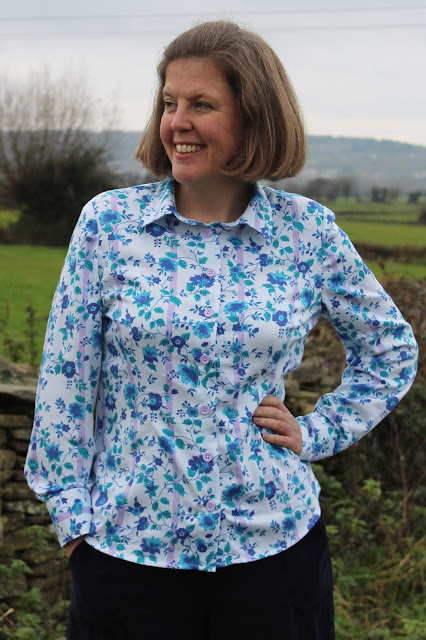 I've previously made the Sewaholic Granville shirt (my original version from a few years ago is here) and been pleased with it, but while the back princess seams and yoke give the shirt a nice shape I feel like they're not great if you want to make a shirt in a fabric with a large print because they break things up too much (or mean that you have to spend a lot of time on pattern matching!). If you've been reading this blog for a while, you may have noticed that I like a large print so I thought it would be worth giving another shirt pattern a go. 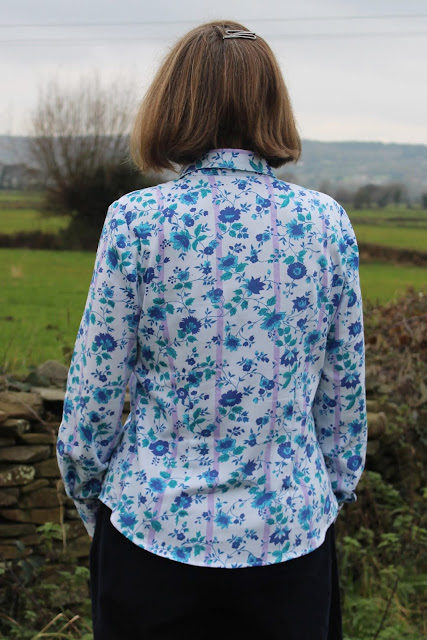 Vogue 8772 caught my eye because it has similar shaping to the Granville, but that shaping is provided by French darts rather than princess seams. OK, so darts break a print up too, but I don't mind that as much for some reason. The pattern is also pretty versatile as it comes with pointed collar and pussy bow options, as well as sleeve variations, a sleeveless option and two different hem lengths. It also helped that Vogue patterns were on sale when I bought it!

I made view D of the pattern - the pointed collar, long cuffed sleeves and the shorter hem length. 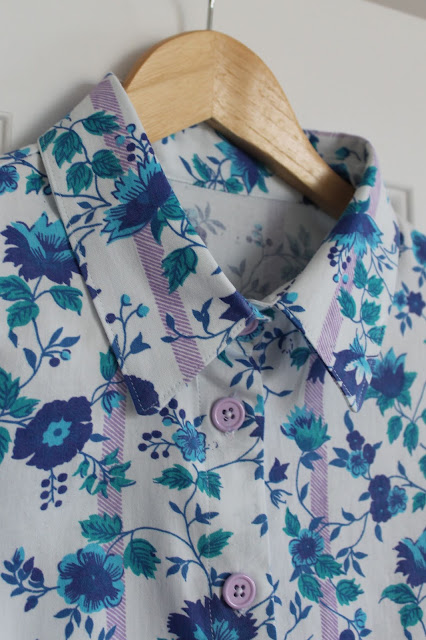 Having made a couple of shirts and shirt dresses now, I'm fairly familiar with the process of constructing a shirt so I didn't have any trouble with this pattern. The instructions were fairly brief but always clear as far as I was concerned.

That said, I did go a little off piste when it came to the finishing of the centre front. The pattern doesn't include a separate button placket, and instead the centre front is double-folded back on itself to create a facing. I added a strip of interfacing to one layer of the fold, as I always find my machine stitches buttonholes better on interfaced fabric. I also topstitched the facing down to make it look more like a button placket. Neither of these are particularly major changes from the instructions, but I'm glad I made them all the same. 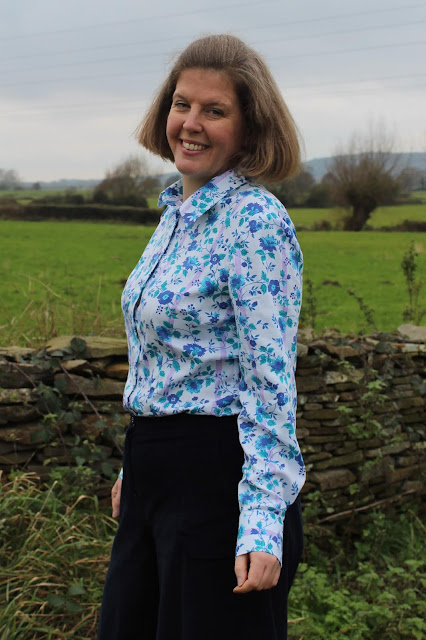 In terms of sizing, according to the pattern I should have made a 16 at the bust, blending out to an 18 at the waist and hips. I consulted the finished garment measurements and decided that I'd actually be fine making a straight size 16. I'm pleased with the fit - it's nicely shaped without being so fitted that I'm risking gaping buttons!

One point to note is that the arms come up quite long - they're just about OK on me and I'm 5'9" with relatively long arms, so if you're shorter or have proportionately small arms then you may need to shorten them. 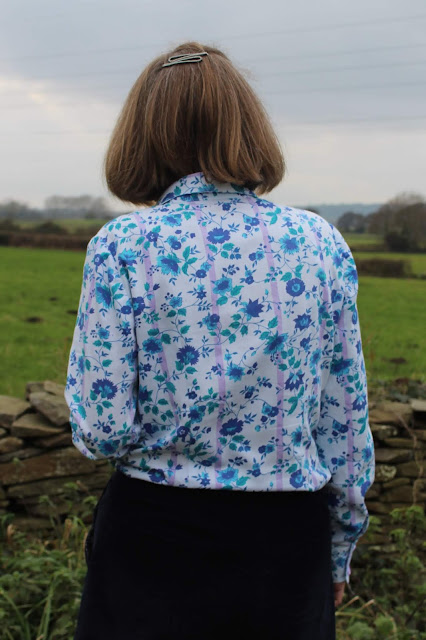 The fabric I used is some pretty cotton (or I assume it's cotton anyway!) that was part of a large bag of fabrics that my auntie gave me when she was clearing out her parents' house. As soon as I saw it, I thought it would make a lovely shirt and I think I've proved myself right (even if I do say so myself!). 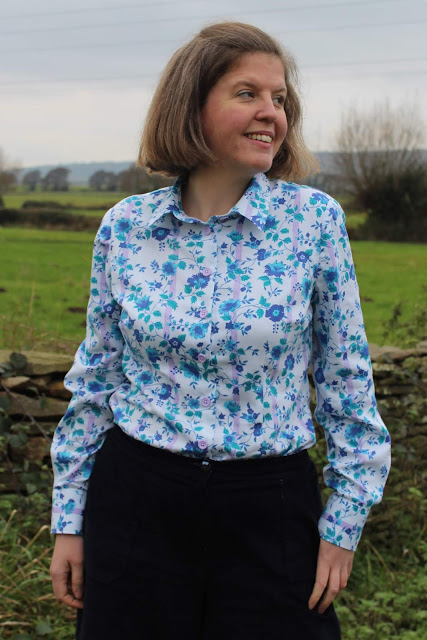 I briefly considered pattern matching across the centre front, but then I realised that the pattern repeat on the fabric was fairly huge so matching the flowers exactly would have meant wasting a fair bit of fabric. Instead, I just made sure that the stripes continued evenly on either side of the front. I also made sure that I had a stripe running around the collar and across the middle of each cuff, just because I like how that looks. 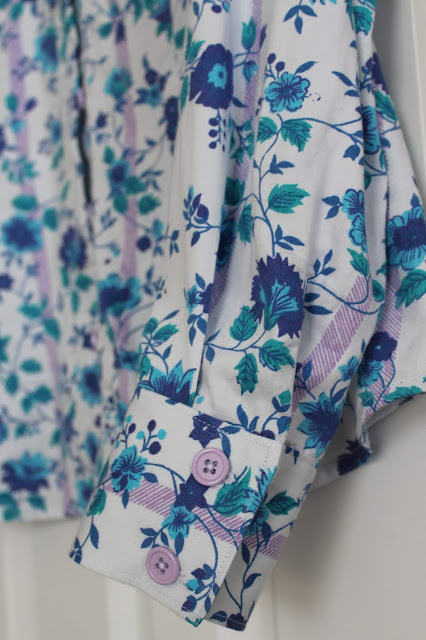 I'd originally intended to have a stripe running down the centre front, but if I'd done that then the print placement would have meant that the stripes to either side of the centre would have disappeared because they'd have been eaten up by the front darts, which would have looked weird. As it turns out, I think having to change my original plan was a blessing in disguise because the purple buttons that I found perfectly match the stripes and look great running down the centre front through the flowers. 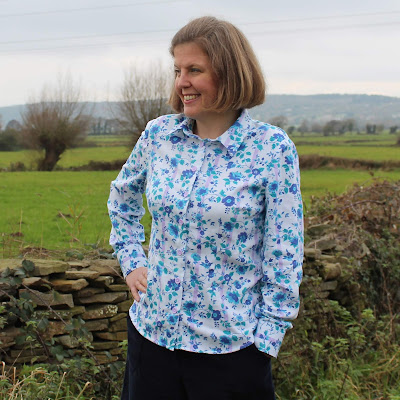 I'm really pleased with the shirt and have already treated myself to some more fabric to make a second version. My mum has also requested one for her Christmas present, so I'll be making that in the not-too-distant future too. All in all, I'm very glad I gave Vogue 8772 a try, and I think I'll definitely be getting my money's worth out of this pattern!

Posted by Ruth - Nightingale and Dolittle at 16:58