Do you ever find that when you're working on a project serendipity comes along and makes the result far better than you imagined? That definitely happened here - I was making a skirt, and pondering whether I actually had anything in my wardrobe to wear with it, when it dawned on me that I had a good fabric and pattern already in my stash to create a solution to that problem. Enter my versions of the Megan Nielsen Veronika skirt and Seamwork Aurora top... 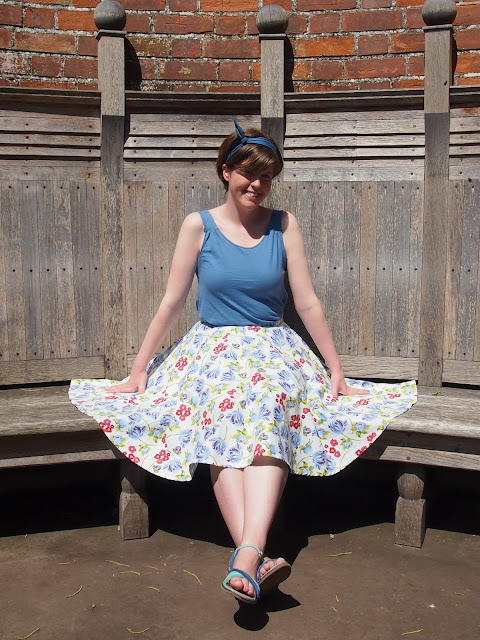 One of my problems when it comes to separates is that nothing ever seems to go together, but hopefully in this case that won't be an issue because I know that these two were made for each other. I'll probably still keep an eye out for top-appropriate fabric that matches the other colours in the skirt though, after all it's always nice to have options, isn't it?

So, on to the individual patterns themselves.... 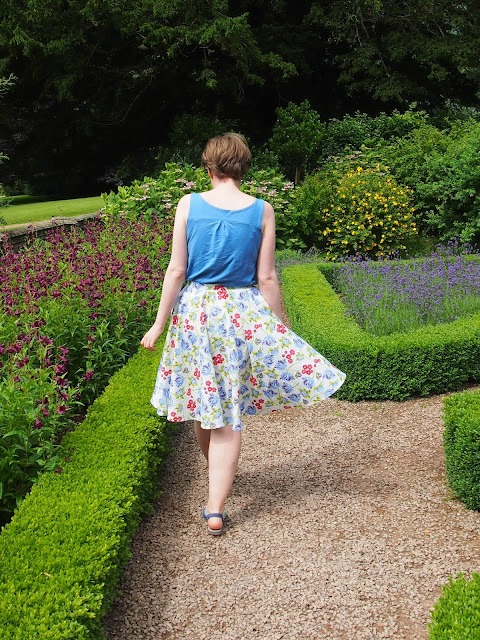 As soon as Megan Nielsen generously released the free Veronika skirt pattern, I knew that I'd be making one. I'd been meaning to draft my own circle skirt pattern for a while, but had never quite got round to tackling the maths. The Veronika pattern means that I don't have to do that anymore! It's a basic circle skirt with two waistband widths and the option for cute scalloped pockets.

For this version, I used the narrower waistband and left off the pockets (which seemed sensible with this large-scale print), but they'll definitely be added to a future Veronika which is sitting in my mind waiting to become a reality. 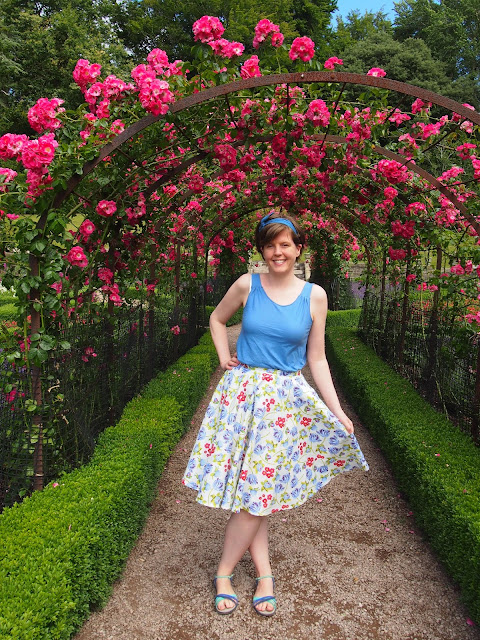 As you'd expect for a circle skirt, this was a nice easy project and only took a couple of hours to do most of the sewing. As is always the case, the worst part was giving the nearly-finished skirt enough time to hang before hemming. So frustrating when you want to wear your new creation!

The fabric is from the Riley Blake Floribella collection, and I managed to pick it up for a bargain price from the Village Haberdashery sale section (as I'm writing this, they only seem to have a bolt end left - unsurprising given how much of a bargain it was!). When it arrived, I was slightly surprised by the scale of the print as I'd just imagined it would be smaller than this for some reason, but I actually love how it looks in this skirt. 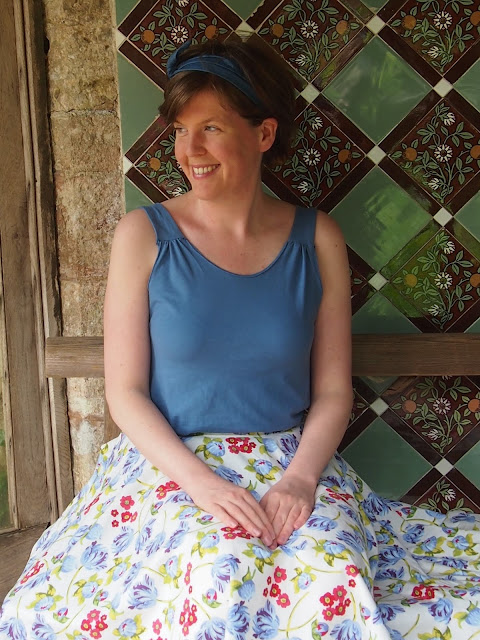 The top is the Aurora pattern from June's issue of Seamwork. It's a simple vest top with added pretty details of gathering at the front and a pleat at the back (which I now reaslise I failed to get any close-ups of) where the separate yoke meets the main sections of the top. I really liked the pattern when it was released and added it to my mental list (which is rather long!) of things I want to sew. 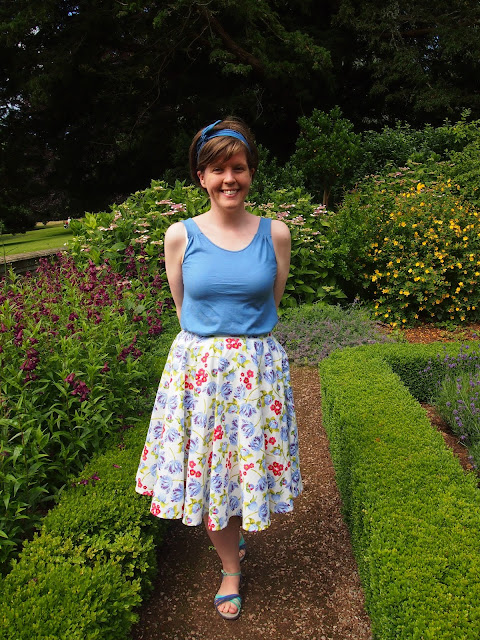 Then when I was sewing the skirt, I realised that the fabric I had left over from making my tea-cup print Astoria was actually a pretty perfect colour match for this skirt and I had more than enough to get an Aurora out of it. As I said when I was talking about my Astoria, the fabric isn't the best quality in the world but it's worked out OK here.

As you'd expect with any Colette/Seamwork pattern, the instructions are thorough and really clear. The top comes together really quickly - I'd say their 2 hour estimate is about right and I'm not particularly speedy. 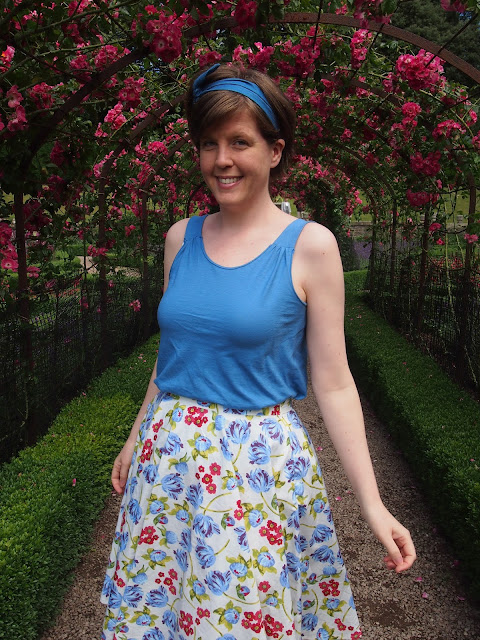 When I was sewing the top, I wasn't entirely won over by the finish it produces. Basically, you start by hemming the front neckline and the armhole sections of the front and back, then make the yoke (which is self lined), and then attach the yoke to the front and back. That means that the seams are right at the edge of the garment, whereas I'm more used to sewing the seams first and then enclosing them with the hem, and I think that looks neater. It didn't bother me at all when I was wearing it though and, let's face it, how many people are really going to study the inside of my top?! So it might not be my favourite finish, but it wouldn't stop me making another Aurora. 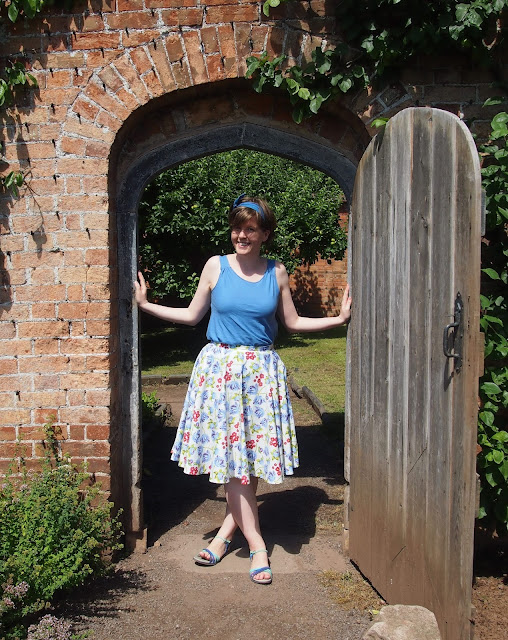 I really like my versions of the Aurora and Veronika together. And considering that Veronika is a free pattern, Seamwork patterns are fairly cheap, the floral fabric was a bargain and the jersey was left over from another project, I think this is a fairly thrifty outfit! I'll definitely be making both again - I already have some lovely drapey denim for a Veronika, and Aurora is a great basic-but-not-boring top so will always come in useful. And on that note, I'll leave you with a twirling shot, because surely all blog posts involving circle skirts have to feature twirling somewhere, don't they?! 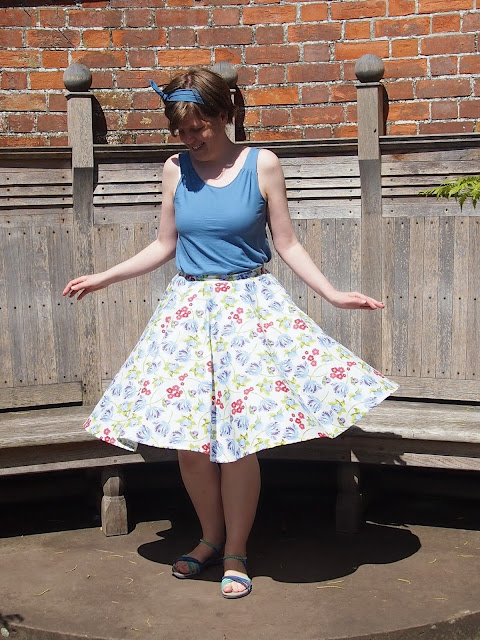 Posted by Ruth - Nightingale and Dolittle at 09:01