A little while ago I was lucky enough to win a giveaway hosted by the lovely Liz of Sewn By Elizabeth and Indie Stitches for a Bluegingerdoll pattern. I chose the Winifred dress and, after a slight bit of pattern hacking, here's my version... 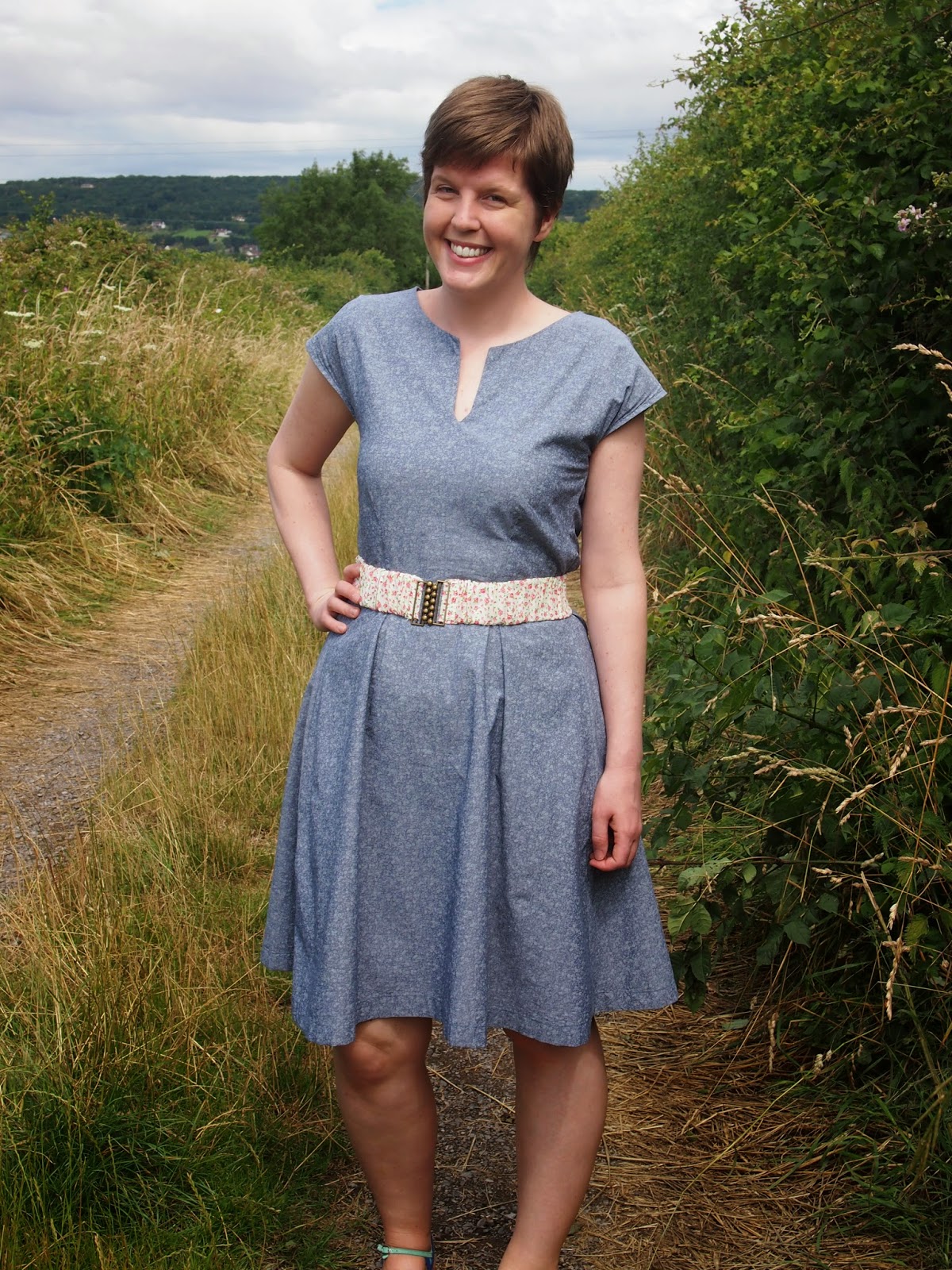 As Bluegingerdoll patterns are designed to fit a D cup, which I'm not, I thought I'd have to make some fit adjustments to the bodice - to be honest this was probably why I hadn't already bought the Winifred (or the Billie Jean - so pretty!) for myself! In the end though, this turned out not to be much of a problem and the fitting was straightforward. From comparing the paper pattern to my measurements, I knew I needed to add length to the bodice so I started out by making my standard addition of 1 inch, and then made a muslin to check what other changes might be needed. 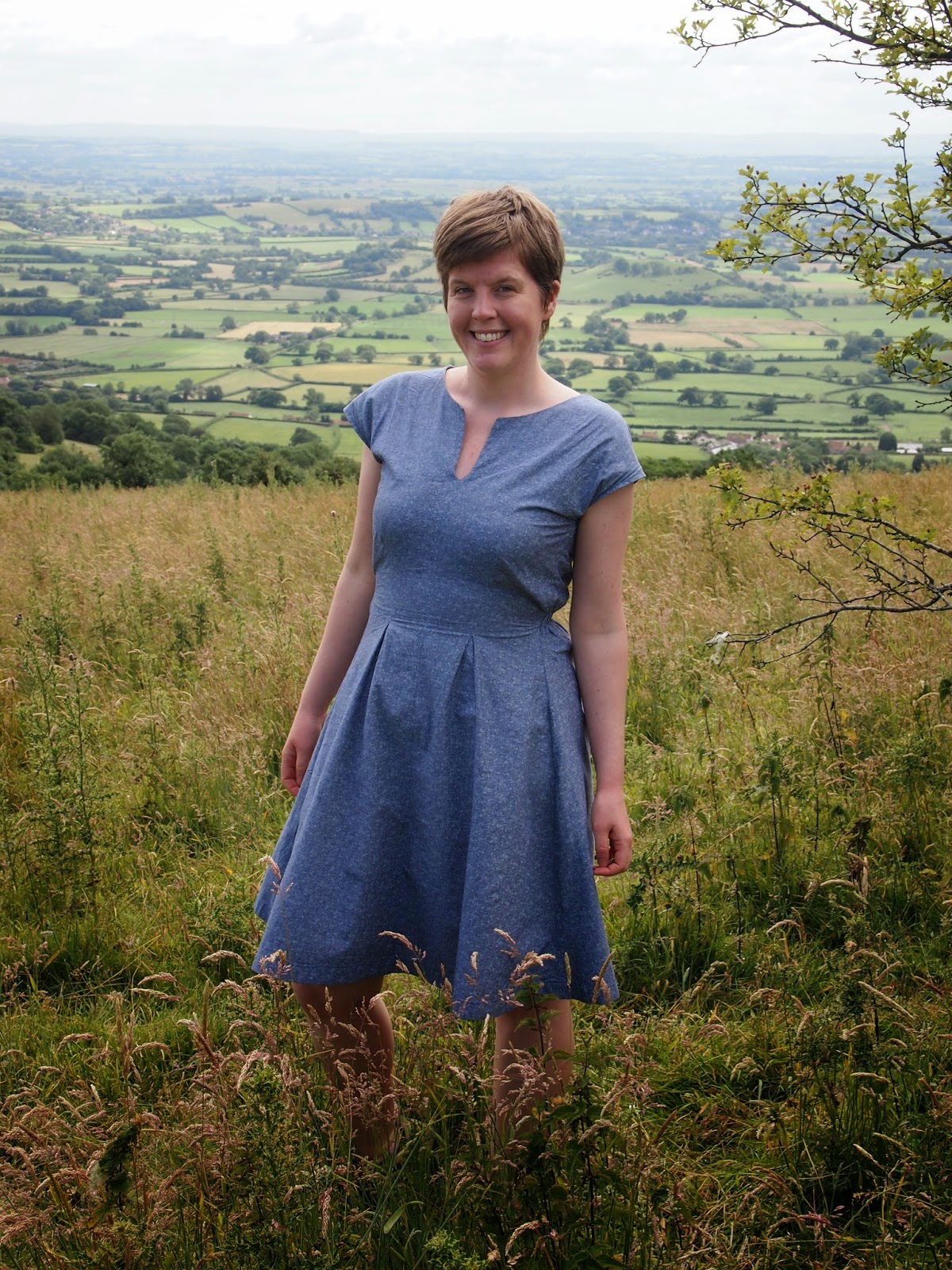 That showed me that I needed to add another inch again, and that I'd added the length in the wrong place - I'd added it above the tuck dart as suggested in the Winifred sewalong (which includes lots of tips and tricks if you're thinking of making your own Winifred), but that made the dart too low and left me with excess fabric under the bust. So, for muslin no. 2, I removed the inch I originally added, and instead added 2 inches in the middle of the dart. Problem solved!

At this point, the shape was really nice once I had the dress on, but it was ever-so-slightly on the tight side and a bit of wiggling was needed to get the dress on and off. I was fairly sure that going up a size would make it too big though, so I decided to sew the dress with a 1/2 inch seam allowance instead of the usual 5/8 inch. Probably not technically the right approach to take, but it worked fine and now the dress fits nicely without any need for wiggling. 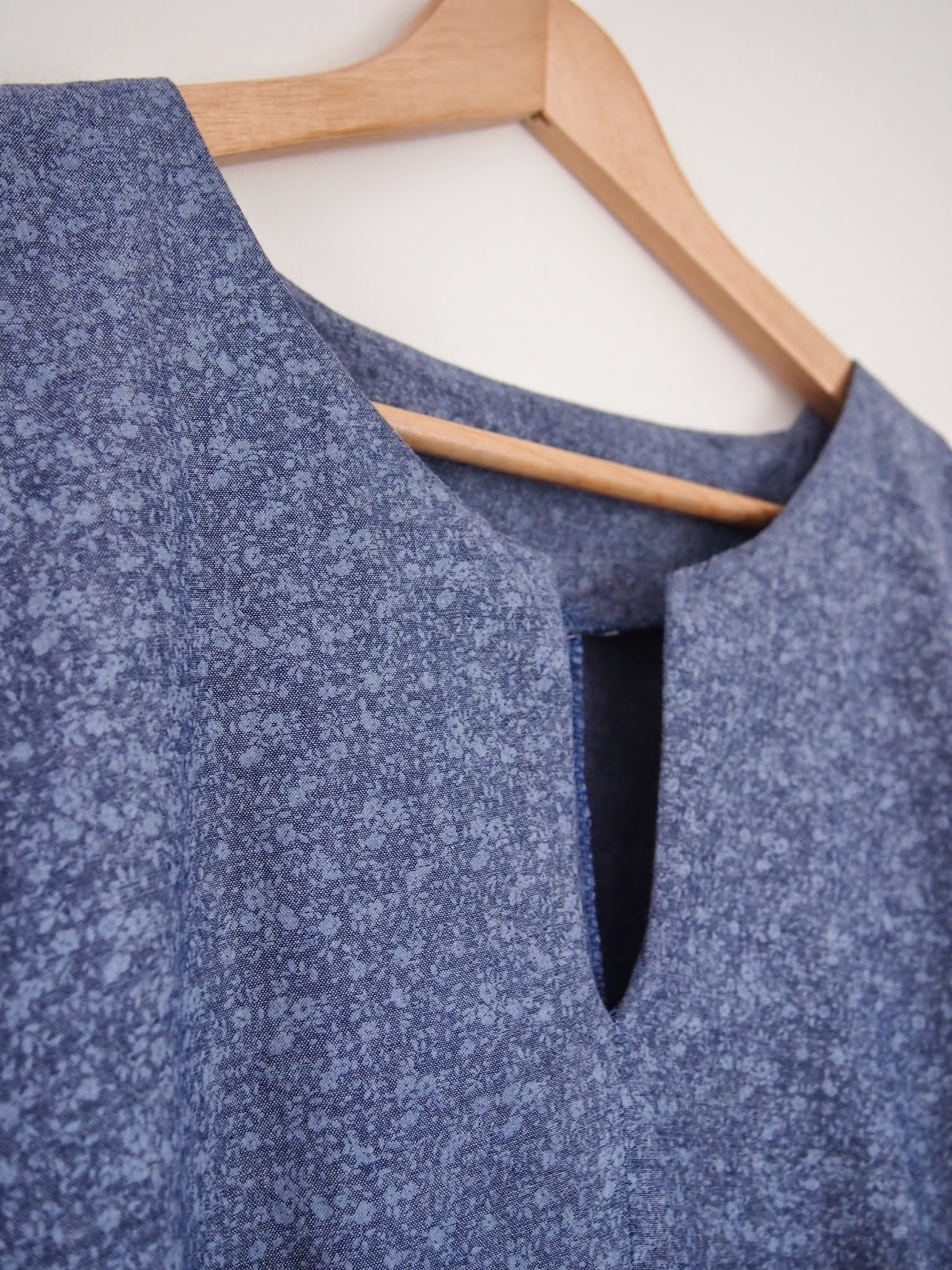 Fitting aside, those of you who are familiar with the Winifred pattern will probably have noticed the big change that I made - mine's collarless. When I was making my muslins I decided that, lovely though the collar looks on other people, it didn't entirely suit me so I wanted to make it collarless instead. Luckily for me, Heather had already done the hard work for me and written a fantastic tutorial about how to make a collarless version of the Winifred dress on the Bluegingerdoll blog. It worked a treat, and I'm really glad I made the decision to go collarless. 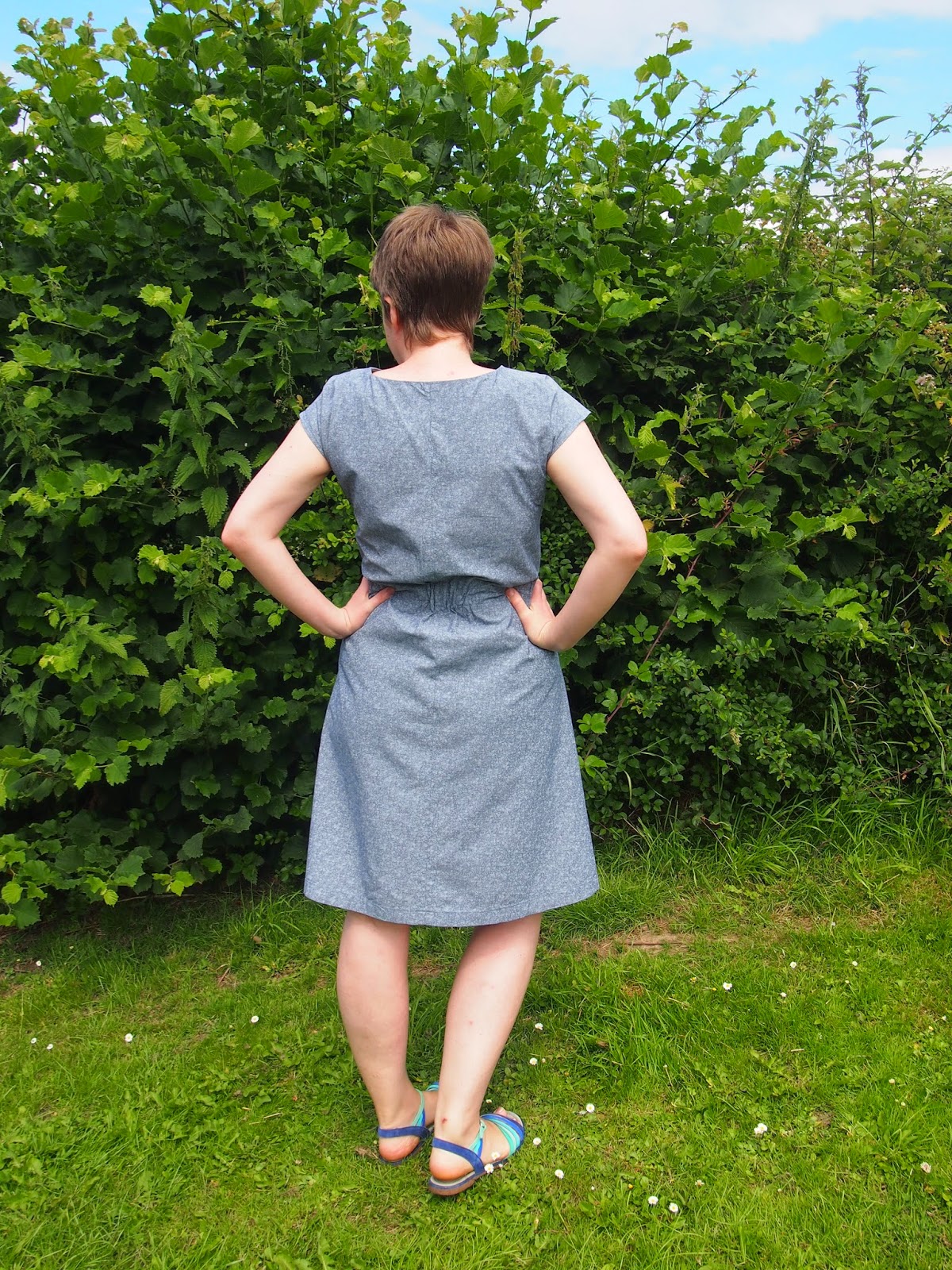 Once I'd got through making all my adjustments, Winifred came together really quickly as there are no zips or buttons to worry about. The shaping is provided by the two tuck darts on the front, which act kind of like pleats, and an elasticated waistline at the back. The back is also meant to have a fabric belt which covers the elasticated section, but my hacking came into play again at this point. I had actually added the belt, but when I tried the dress on to work out where I needed to secure the belt buckle, I decided to take it off so that I had the option of wearing the dress with other belts.

I really like the shape of the front, but I feel like it's slightly less flattering on me from the back. On the plus side though, the elasticated back waist means that it's really comfy to wear whilst still looking nice, which makes it great for when I'm working - I work from home so being comfy is more of a priority than looking smart, but I still like to be presentable. This definitely fits that bill! 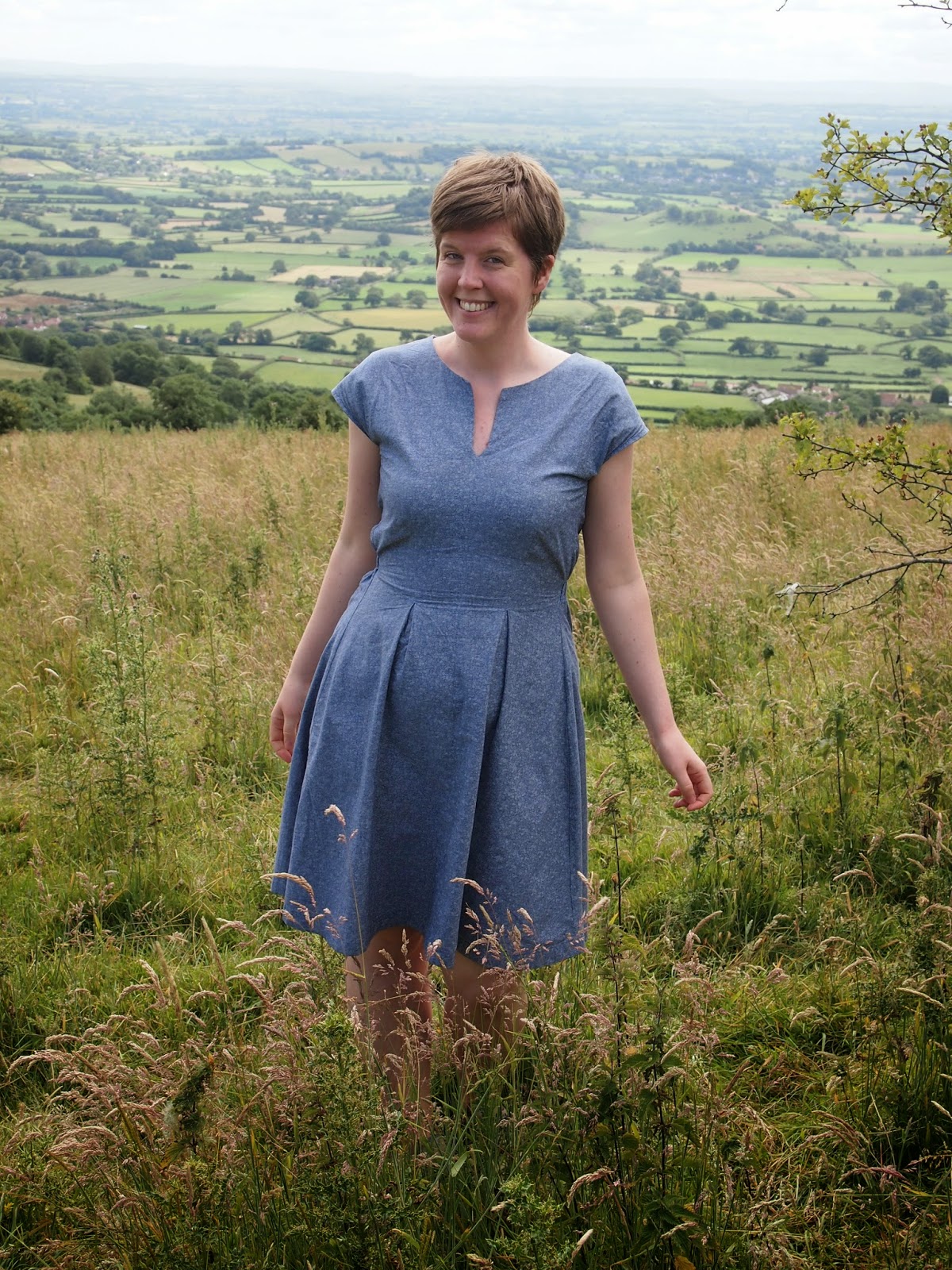 The fabric I used for this is a floral chambray that I got on ebay. I like the look of it up close, but the floral pattern kind of disappears at a distance so the fabric ends up looking pretty plain. This was actually the look I was going for because I wanted something that would be easy to wear with anything on a daily basis, but I think the colour can end up looking a bit dull on me (in some lights it's lovely, in others it ends up looking a bit more drab grey than pretty blue) - one of the reasons why I wanted to be able to wear a belt with the dress to brighten it up a bit. 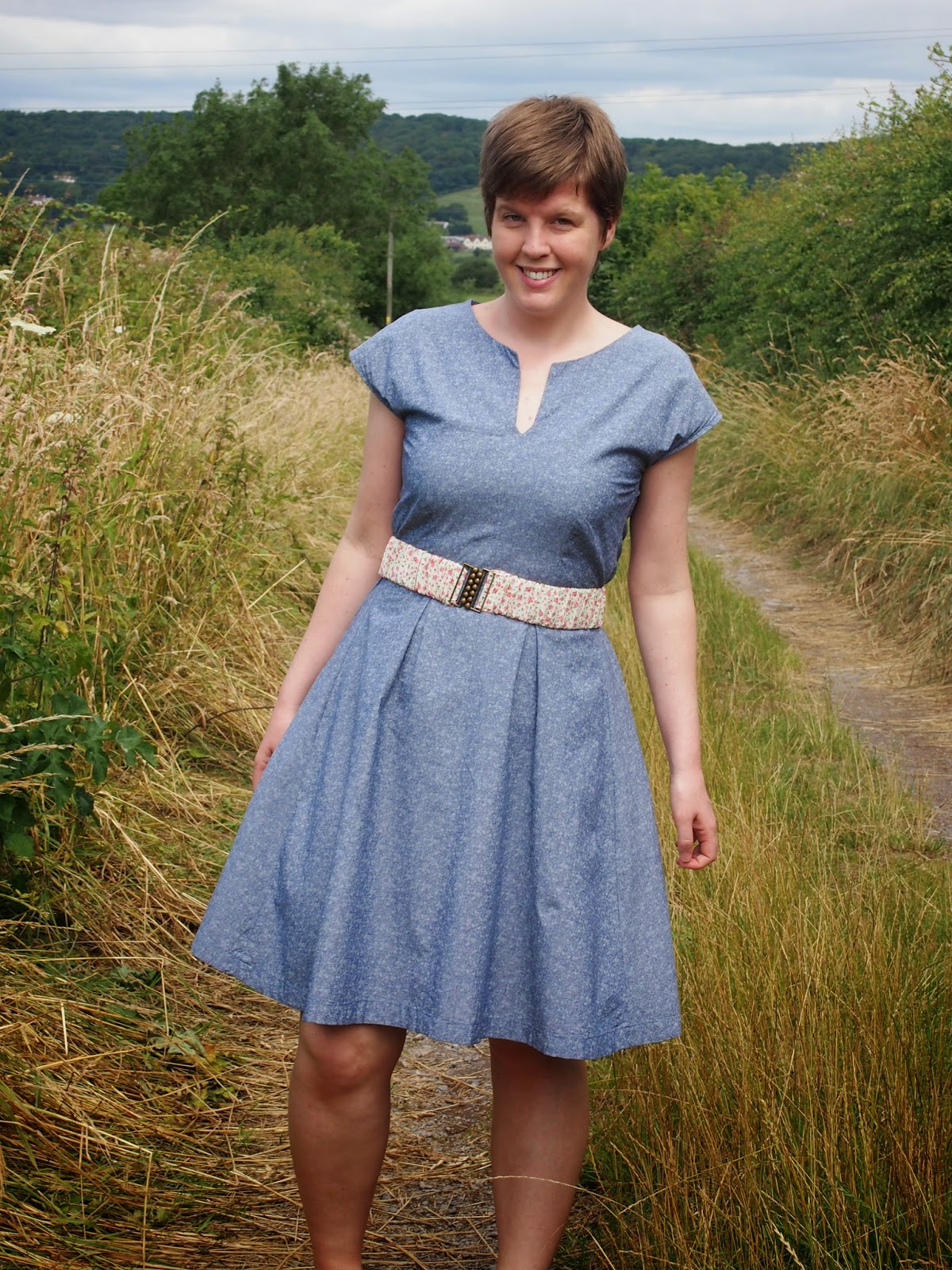 All in all, this isn't my favourite dress that I've made, but then not every dress can be your favourite dress can it? That's not to say that I don't like it, I definitely do and it's so easy to wear that it definitely won't be getting left unloved at the back of my wardrobe. Some days you just need a fairly plain dress that you can pull on and be good to go without having to worry about what you're going to wear with it - this definitely fits that bill, so it's a winner in my book!
Posted by Ruth - Nightingale and Dolittle at 12:20