Just after Christmas, I picked up some pretty rose print cotton at a bargain price in the John Lewis sale. I had a plan of the dress I was going to make and it was all going to be great, then as I was working on other projects I fell out of love with the original idea for the dress. For some unknown reason I started to get oddly stressed about what to make with the material, but then I saw the Mortmain dress, which has recently been released by Gather, and my problems were solved! It's a shape that I knew I'd love, and the name is taken from the book I Capture the Castle, which was definitely a good sign as far as I was concerned. A couple of weeks later and the result is just what I hoped for... 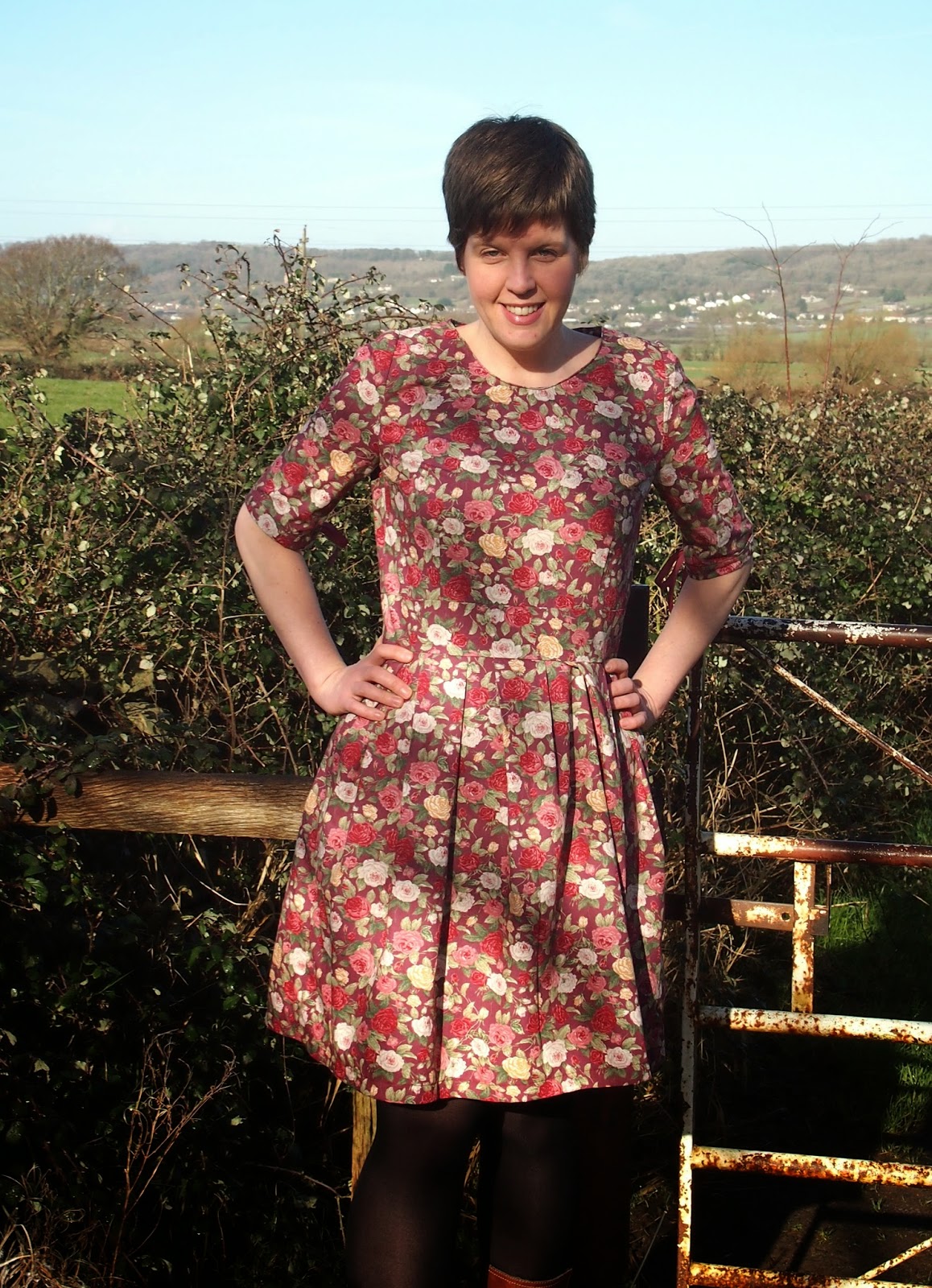 Sorry for the random shadows, but hey, shadows mean that the sun is out which is definitely a good thing compared with how the weather has been lately!

Anyway, back to the dress...the first thing to say is that the packaging is really pretty (it also arrived the day after I'd ordered it which is nice when you want to get sewing!), the pattern is printed on slightly thicker paper than lots of patterns and the instruction booklet that comes with it has lots of really clear instructions and plenty of diagrams to help you along the way. The pattern is classified as being for ambitious beginners, which I'd say is just right - there are more details than in an average beginner pattern but the instruction book will hold your hand and guide you through them all so there's nothing to be scared of. 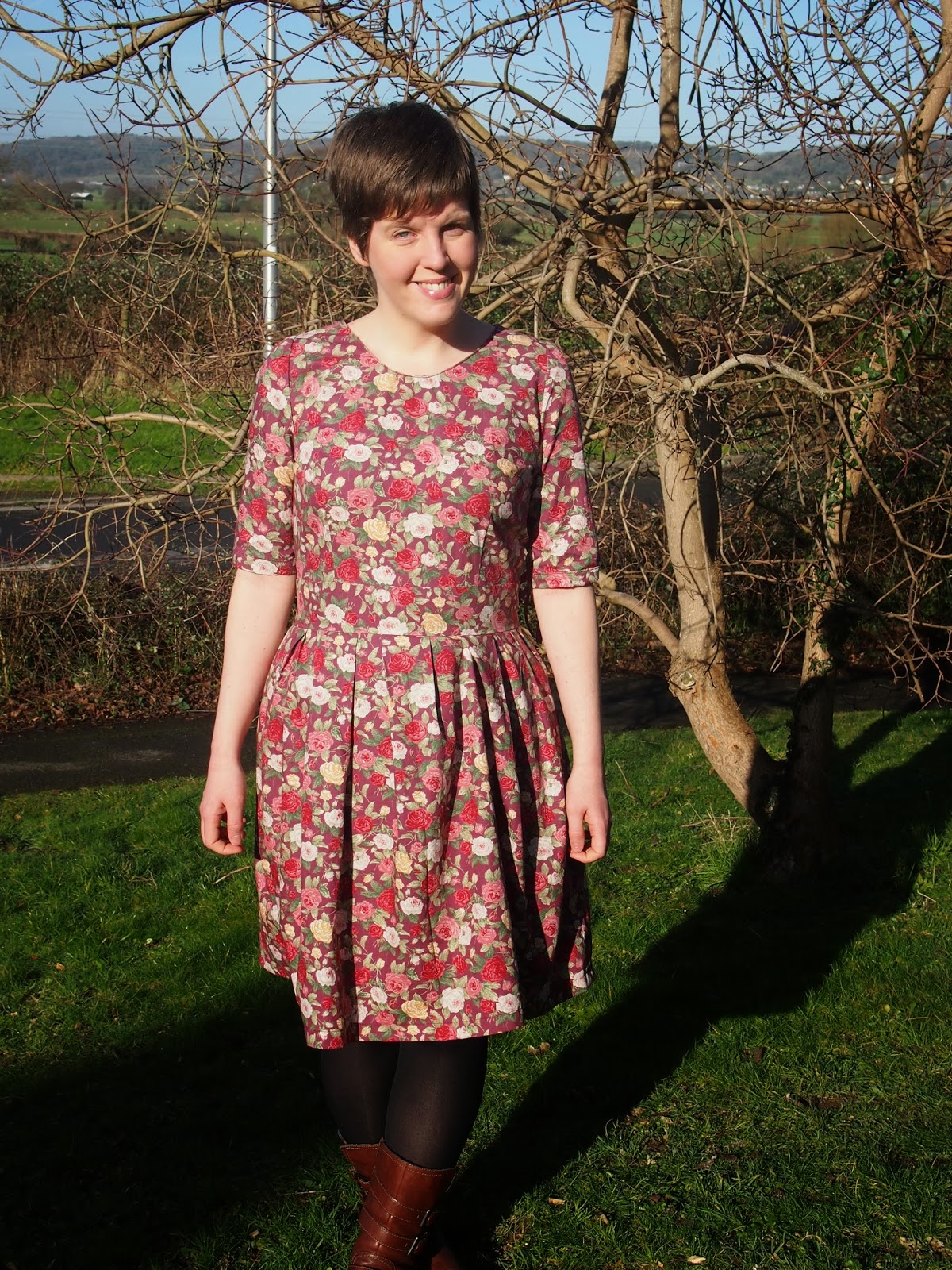 The dress has a fitted bodice, separate waistband and box pleated skirt, and can either be sleeveless or the option which I made with 3/4 sleeves with cuffs. The main instructions for the cuff have you make an elastic loop to fasten onto a button, but there's also a tip in the instruction book which suggests using ribbon ties instead which sounded fun to me, so that's what I did... 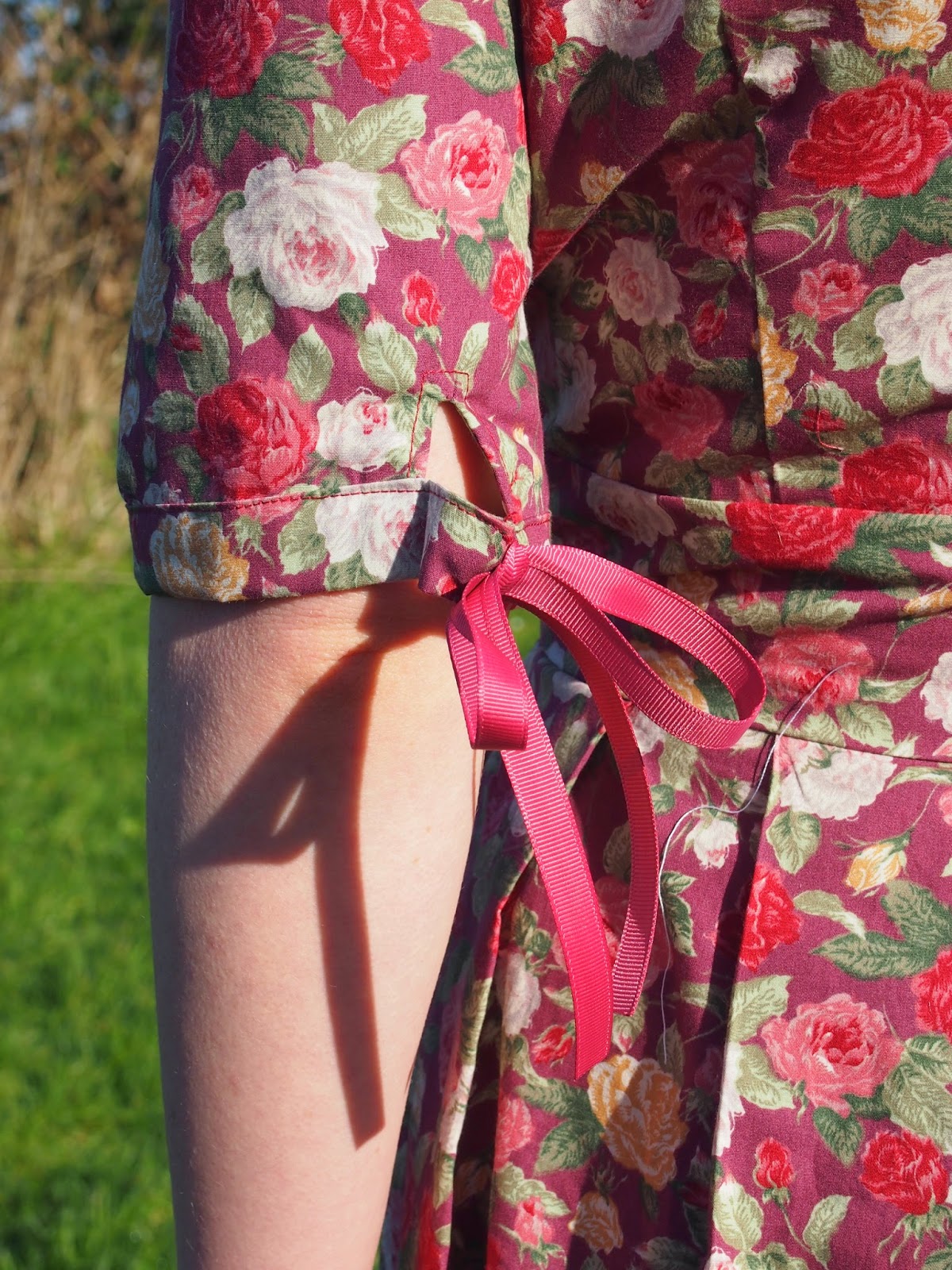 This option probably wouldn't be to everyone's tastes, and it does make the dress very girly, but I love it! Oh, and excuse the stray bit of thread that I clearly didn't manage to remove before taking the photos. On the plus side, this photo does show the waistband nice and clearly for you - it gets a bit lost in this print but I think it gives the dress a good shape.

The Mortmain fastens with an exposed zip up the back - this was the only bit of the dress that I wasn't 100% sold on at the outset because I'm often not sure about how exposed zips look in general but I decided to give it a go and I'm glad that I did because it means I've done something a bit different for this dress. I think it helped as well that I found an olive green zip to use which goes with the leaves on the material. 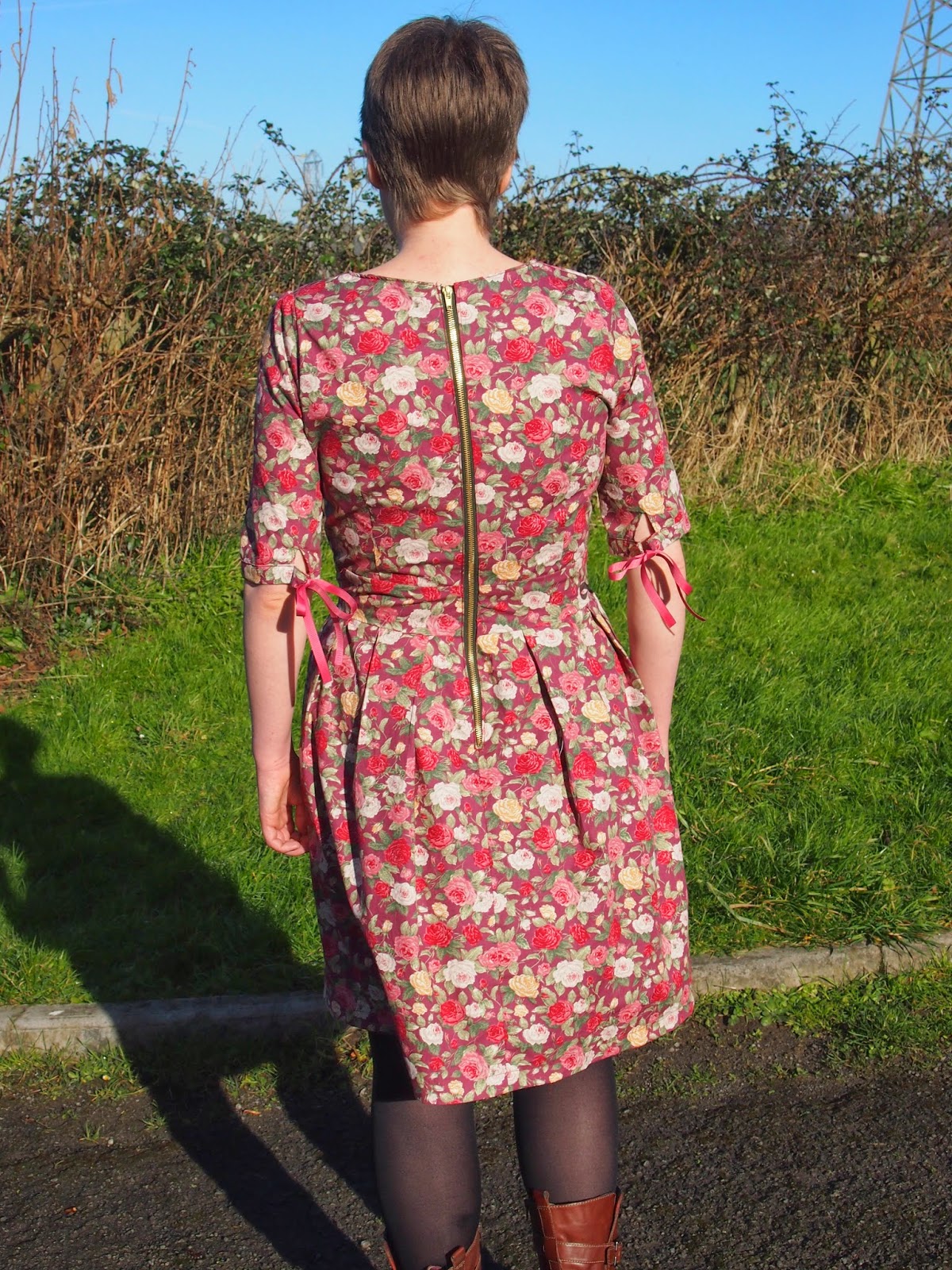 As for sizing and fit - I cut a straight size 14 and added an inch to the bodice (which is a standard adjustment for me as I'm on the taller side of average) but that was the only change I needed to make.

Everything came together really nicely, apart from the moment when I almost managed to ruin things by somehow ripping the neckline part way through sewing up the bodice. Aaaargh! Don't ask me how I managed that because I really couldn't tell you what happened. Much to my relief, the rip was tiny so I just sewed the neck facing with a very slightly bigger seam allowance and disaster was averted - phew! 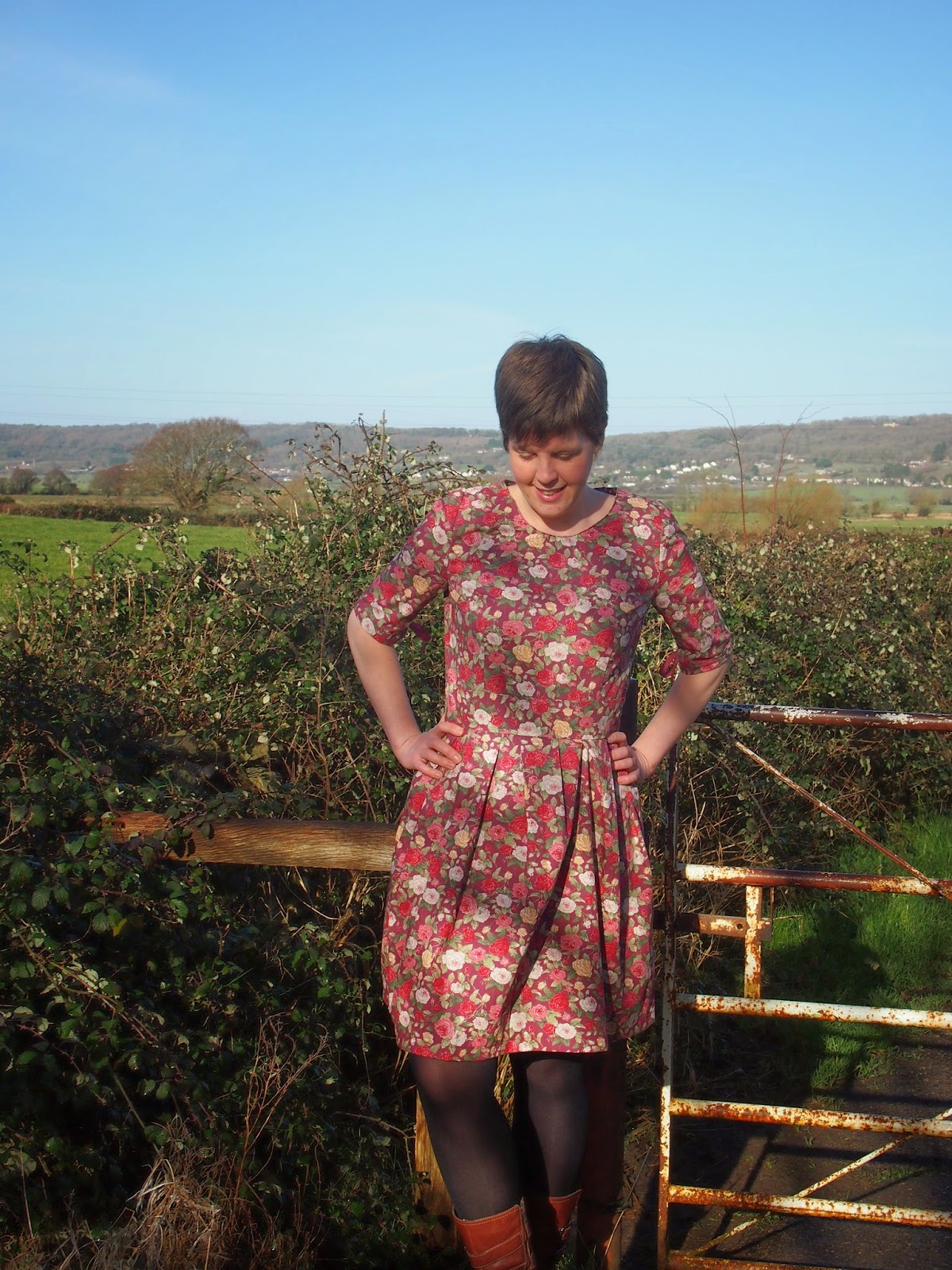 Overall, as you can probably tell, I'm really happy with my Mortmain dress. The general shape is similar to some of the other dresses I have made, but there are extra details to keep things interesting - the fastened cuffs are cute and I think the waistband is flattering. The pattern was great to work with so I'm looking forward to seeing what Gather come up with in the future and for now there are other Mortmain dresses emerging in my head - I think it would work well with some colour blocking and I've already spotted a fun print which would make a great sleeveless version for summer. Now let's just hope that this break from the rain will continue so I can wear my dress again soon!
Posted by Ruth - Nightingale and Dolittle at 19:17