In my first post I showed you some personalised cushions that I'd made; one of them was for a cousin's baby and when my other cousin's daughter saw it she was quite taken with it so I said I'd make one for her and some other little girls in the family, but one of the girls decided that she didn't really want a cushion and would rather have, in her words, a teddy dog. This possibly wasn't the best request for me to be given being as I'm not particularly keen on dogs (controversial I know, but I have my reasons!), and when I was little I was much more of a fan of dolls than of cuddly toys, and on a more practical level I'd never made anything like this before, but I decided I'd give it a go and set about finding a pattern.

There are cute a few tutorials out there for making soft toys/plushies, and I almost decided on this one from Jenny Allsorts, but eventually I found Repeating Patterns on Etsy, and thought that their puppy pattern looked quite cute so that was the one I went with.

I was slightly daunted when I first started looking through the PDF pattern, but I soon realised that it was all very clearly explained and there's a photograph for each step so it's easy to see what you're supposed to be doing. So it was quite easy to go from this.... 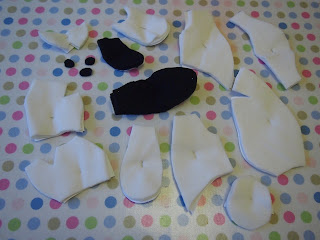 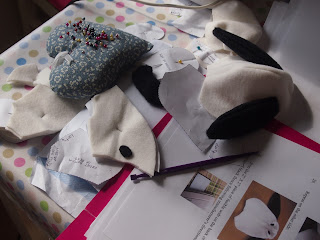 to the finished article... 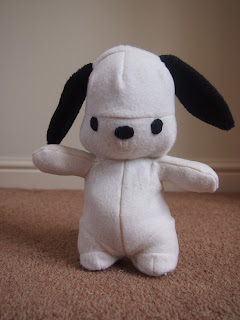 I really would recommend Repeating Patterns if you want to make soft toys, I've never sewn anything like this before and all the little pieces, seams and darts were a little bit tricky at times but the pattern and instructions were so clear that you really couldn't go wrong.

Let's just hope his new owner will be pleased with him!

Posted by Ruth - Nightingale and Dolittle at 17:50