At this chilly time of year, you'll often find me spending the evenings at home snuggled up in my pyjamas busy working on my latest sewing, knitting or crafting project. My cosy winter pyjamas have mostly seen better days though, so I decided it was time to make myself a new pair to brighten up these winter nights. Enter my Alice & Co Whitechapel pyjamas... 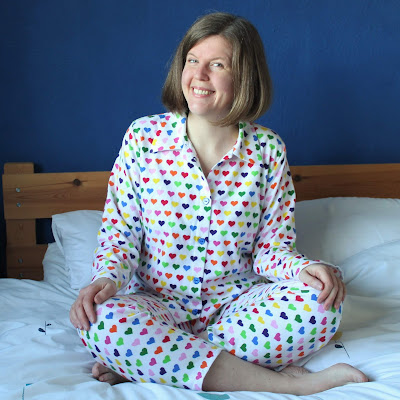 I've had this pattern waiting to be used since I won it as part of a giveaway hosted by Joy of Pink Coat Club last year. I'd intended to use it before now, but better late than never!

The Whitechapel pyjamas feature a boxy style shirt with a button front and simple collar, and elasticated waist trousers with a slightly tapered leg. It's a fairly traditional pyjama style and the trousers in particular are very simple to sew. 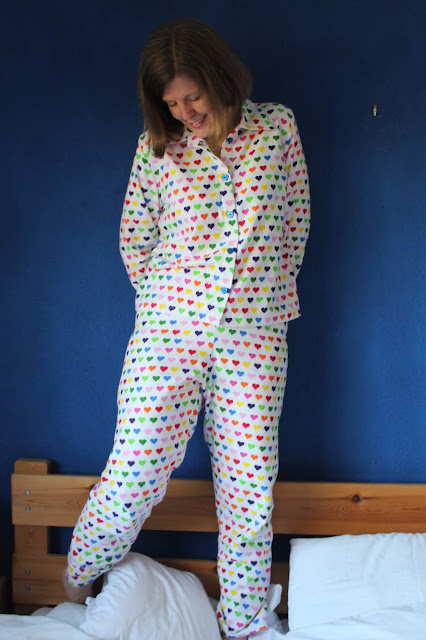 There were lots of things that I liked during the process of sewing my pyjamas. The trousers have just one pattern piece that forms the whole leg rather than front and back legs being cut separately. This cuts down the number of seams so makes the trousers even quicker to sew than other pyjama trousers I've made. The size of the pattern pieces is somewhat alarming though! And you do have to remember to flip the pattern piece over when cutting out the second leg. 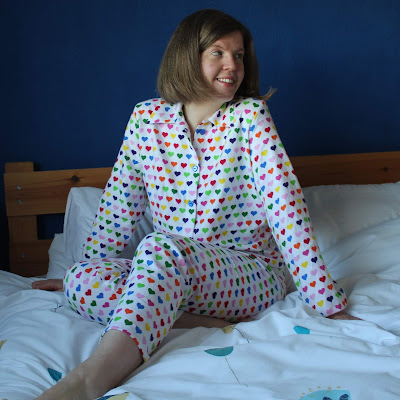 I also really liked the fact that the pattern uses French seams throughout - and don't worry if you've never sewn a French seam before; comprehensive instructions are included with the pattern. The shirt sleeves are also inserted flat, which makes that step a bit easier than having to set in a sleeve and means that you can easily use French seams there too. 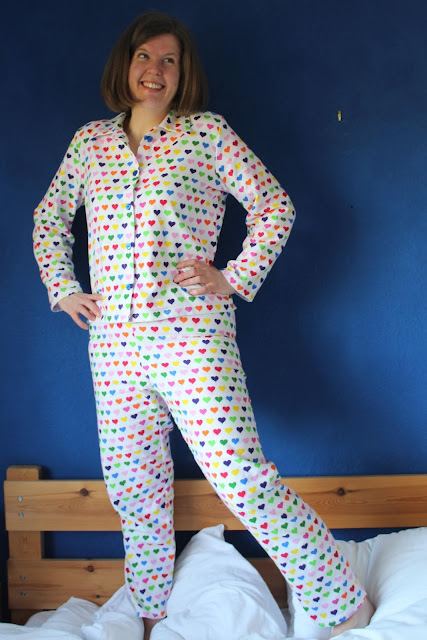 However, I did have a few little issues with the pattern. As far as I could see, the instructions don't actually tell you to press the centre front to the inside to form the button/buttonhole band (they tell you to press 1cm under at the very edge, but not the rest). At one point they tell you to temporarily fold it back to the outside, but without previously telling you to fold it in. From the shape of the pattern piece, it's fairly obvious where you need to press the front under, but it could be confusing if you're a relative beginner.

I also deviated slightly from the instructions for cutting the interfacing for the button/buttonhole bands - they say to cut two strips that are 10cm wide, but that seemed to cover too much of the front to me (and seemed more than shown in the diagrams), so I cut my strips to be half that width and it worked out fine. 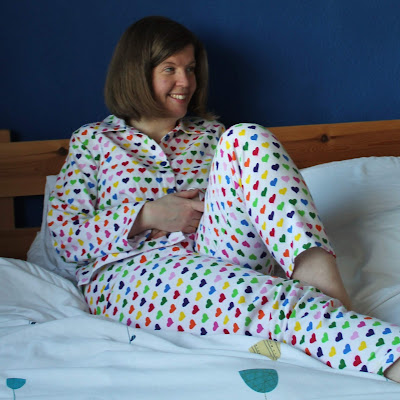 The instructions are written in a chatty style, which makes it seem like you have a friend telling you what to do rather than a teacher. In many ways I like that (sewing is meant to be fun after all!), but sometimes it seemed a bit odd. Mainly when it gave you an alternative way to finish the collar/neckline seam that you can use if you prefer or in case you "mess up" the first way described in the instructions. It might just be me, but it seemed a bit odd to be giving an alternative in case people mess up, instead of writing the original instructions so people don't mess up. 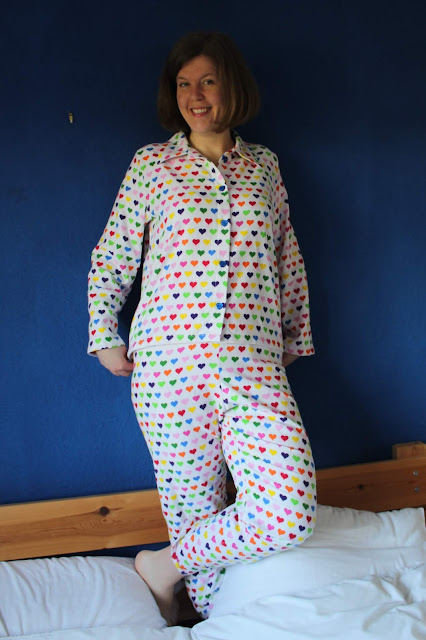 All that being said, those weren't major problems - I did enjoy sewing the pattern and I'm pleased with my finished PJs. The sizing is fairly accurate. Let's face it, with pyjamas you don't need a garment that's perfectly sculpted to your body, but I think that the fit gives just the right amount of ease to be comfy without you ending up drowning in fabric. 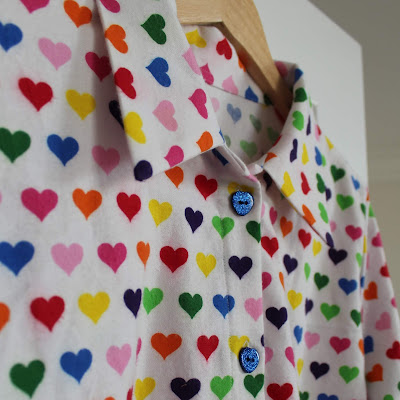 Talking of fabric, for this project I chose to use a brushed cotton twill from Calico Laine. In many ways it's a beautiful fabric - it's lovely and soft, making it cosy to snuggle up in. And the colourful hearts are really fun of course! A word of warning if you're thinking of buying some though - when I prewashed the fabric the colour from some of the red hearts did bleed a bit. It's not terrible, and definitely didn't bother me for these PJs (although I might not have wanted to use it for clothes I'd wear out of the house), but I'm going to be slightly careful the first few times I wash them.

I decided to add to all the colour of the hearts on the fabric by using bright blue glitter hearts for the buttons (bought at a local wool shop). I think they're the perfect finishing touch. 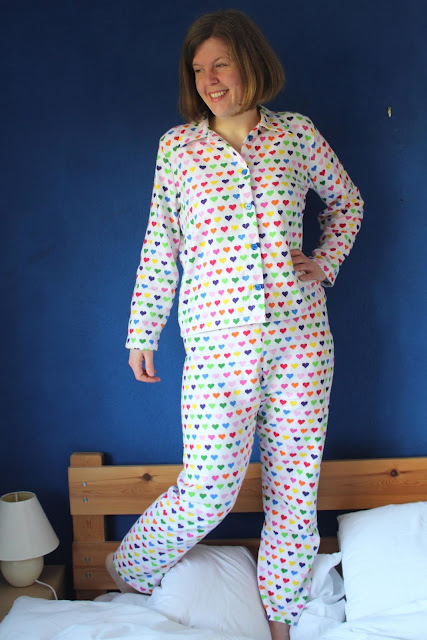 In spite of the couple of little niggles with both the fabric and pattern, I'm really pleased with how my pyjamas turned out. They're super comfy to wear, and the colours make them really jolly. I've got some pretty gingham cotton in my stash that I've earmarked for some summer PJs, so I may well be making some more Whitechapel pyjamas in a couple of months!
Posted by Ruth - Nightingale and Dolittle at 13:59