Hello! How are you all? Things have been a bit quiet around here recently in terms of blogging and sewing, but life itself has been hectic because I've just moved house. As it always the way, it's been a bit chaotic and sometimes stressful (knitting has been keeping me calm while the sewing stuff has been packed away!), but I'm starting to feel just a little bit sorted at last so I thought I'd pop by and show you the last project that I sewed in my old flat. 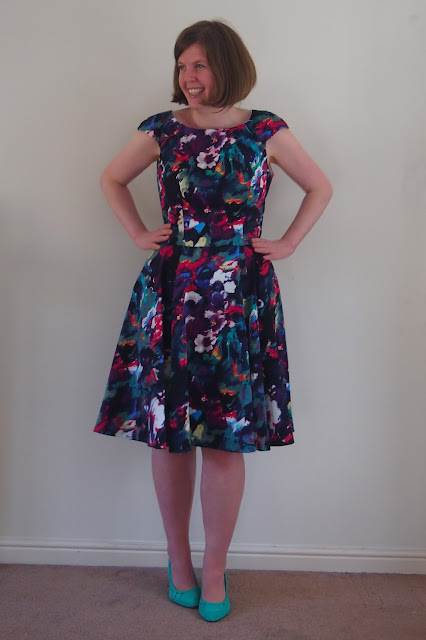 This is a dress that I made to wear to a friend's wedding a couple of weeks ago, but the dress you see here isn't at all what I intended to make. The original plan was to make a Sew Over It Betty dress using a large-scale floral cotton sateen that has been in my stash for a while. Sadly, that wasn't meant to be! 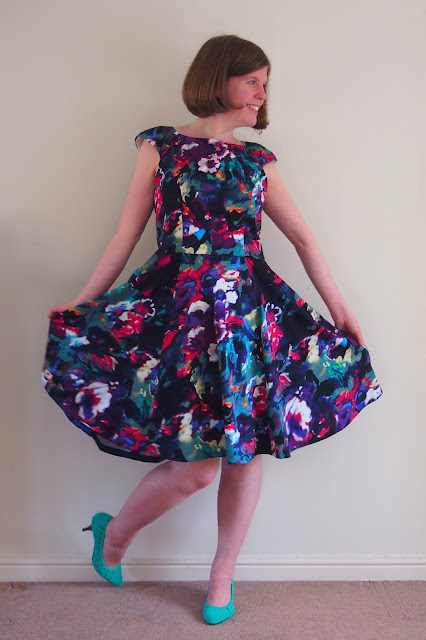 When I toiled the Betty, I had some issues with the fit of the shoulders - they were just too big on me (proportionately, my shoulders are small-ish so that's not too surprising) and just kept slipping off. I made some adjustments to sort that out, but the bodice still just didn't feel quite right on me. For some reason the V-neck back made me feel bizarrely exposed, but I told myself that I was just being weird because the dress isn't exactly revealing at all. So I went to cut into my fabric and found that it was much narrower than I'd thought and wouldn't fit the Betty skirt pieces. I'd have had enough fabric to cut the skirt on the cross grain, but the flowers would have looked a bit distorted if I'd done that. 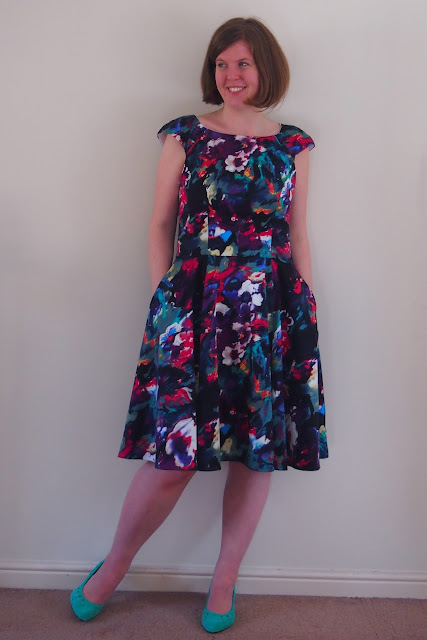 So it was back to the drawing board! At this point, I didn't have much time left (and probably should have been packing instead of faffing about sewing a pretty dress!), so I knew I needed to sew a pattern that I'd already got to fit me. I've really enjoyed wearing the Vogue 9239 (view D) dress that I made earlier this year, so I decided to go with that. Only I thought the large scale floral would be spoiled by interrupting the print over all the panels in the 9239, and I didn't have any other suitable fabric in my stash so I was "forced" to do some emergency online fabric shopping - life's tough sometimes! 😉 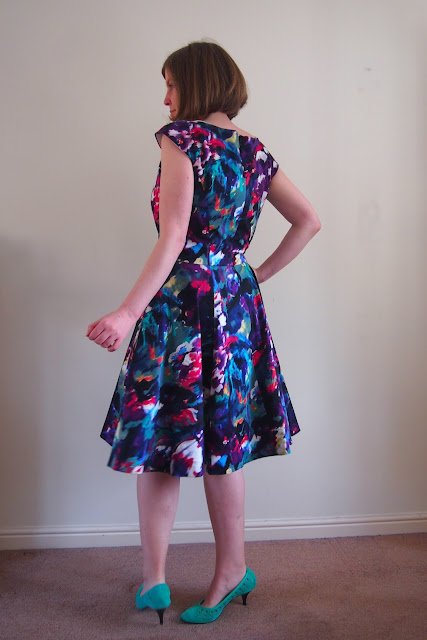 Thankfully I found some lovely stretch cotton from Sewisfaction, which had enough colours in it that I knew I'd be able to find some suitable accessories to complement it in my wardrobe. I wasn't disappointed when it arrived - it's lovely quality and happily it looked good with the shoes that I'd originally been planning to wear with the ill-fated Betty dress (they're the perfect shoes for wearing to a wedding as far as I'm concerned because the look fancy but are surprisingly comfortable!). 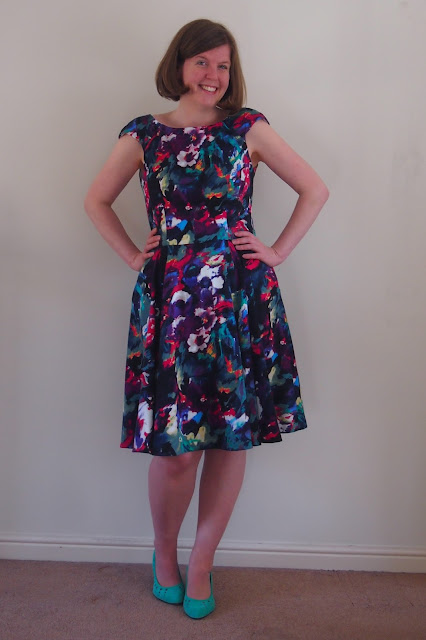 I set aside the whole of the Sunday before the wedding to sew the dress and thankfully it was one of those sewing days where everything just goes to plan. The fabric behaved well, was lovely to sew and pressed nicely and because I'd sewn Vogue 9239 relatively recently, there were no nasty surprises during the process. At the end of the day, I had a dress that was finished apart from hemming so I just left it to hang and then hemmed it with bias binding a couple of days later.

If you're interested in details on sizing and the adjustments I made (there were a few!) - they're all exactly the same as for my first version so check out the blog post on that one. 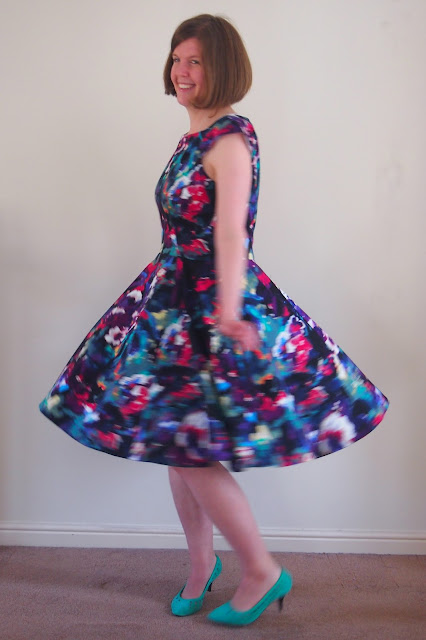 The dress was lovely to wear at the wedding and great for dancing (by which I mean twirling!). I actually don't think I'd have liked the dress I was originally intending to make as much, so it turns out that it was probably good  that things didn't initially go to plan. Anyway, that's about all I have to say about this one so I'll leave you in peace! I hope you're having a lovely Sunday - I'm off to unpack all my sewing paraphernalia!
Posted by Ruth - Nightingale and Dolittle at 11:42