Sewaholic Belcarra - refashioning a dress into a blouse

Has everyone seen the new Sewaholic Belcarra blouse? I was instantly drawn to the pattern when it was released; not only is it meant to go with the Gabriola skirt, which I love, but it's also a very similar shape to an old favourite RTW top of mine. I snapped it up as soon as it was released, and here's my first version.... 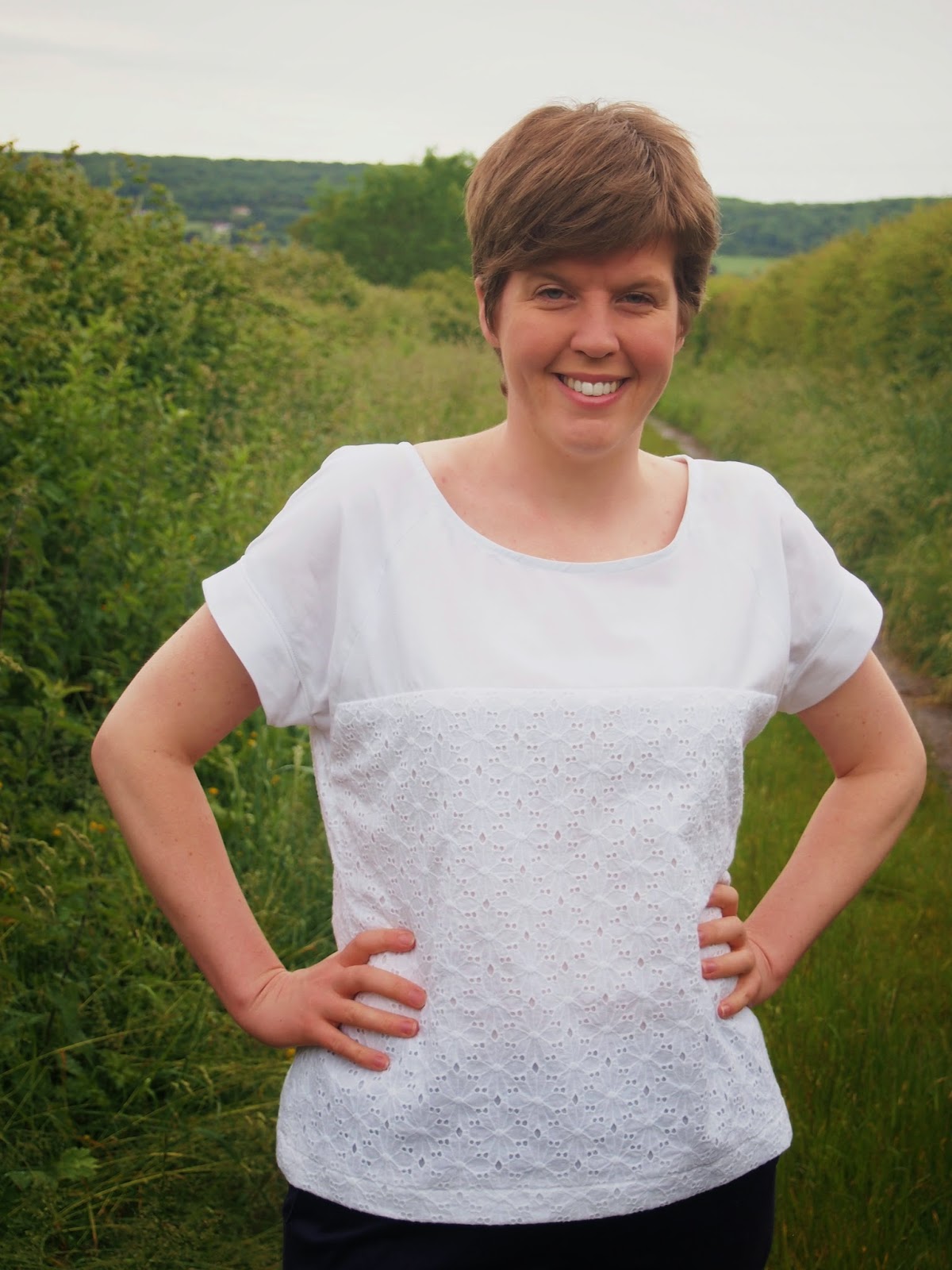 This is essentially view A of the blouse, with the one difference that you may have noticed that I split the front and back sections in two to use two different materials. This was entirely down to an old dress that I'd bought second hand and then never worn, and which I'd decided needed to be refashioned into something else. I stupidly forgot to take a photo of it before I hacked it to pieces, but it was a pretty short, strapless, white cotton eyelet lace empire line dress - there aren't many days a year when it's hot enough here in the UK to wear something like that and to be honest, it didn't do much for me! I think I only bought it because the material was so pretty.... 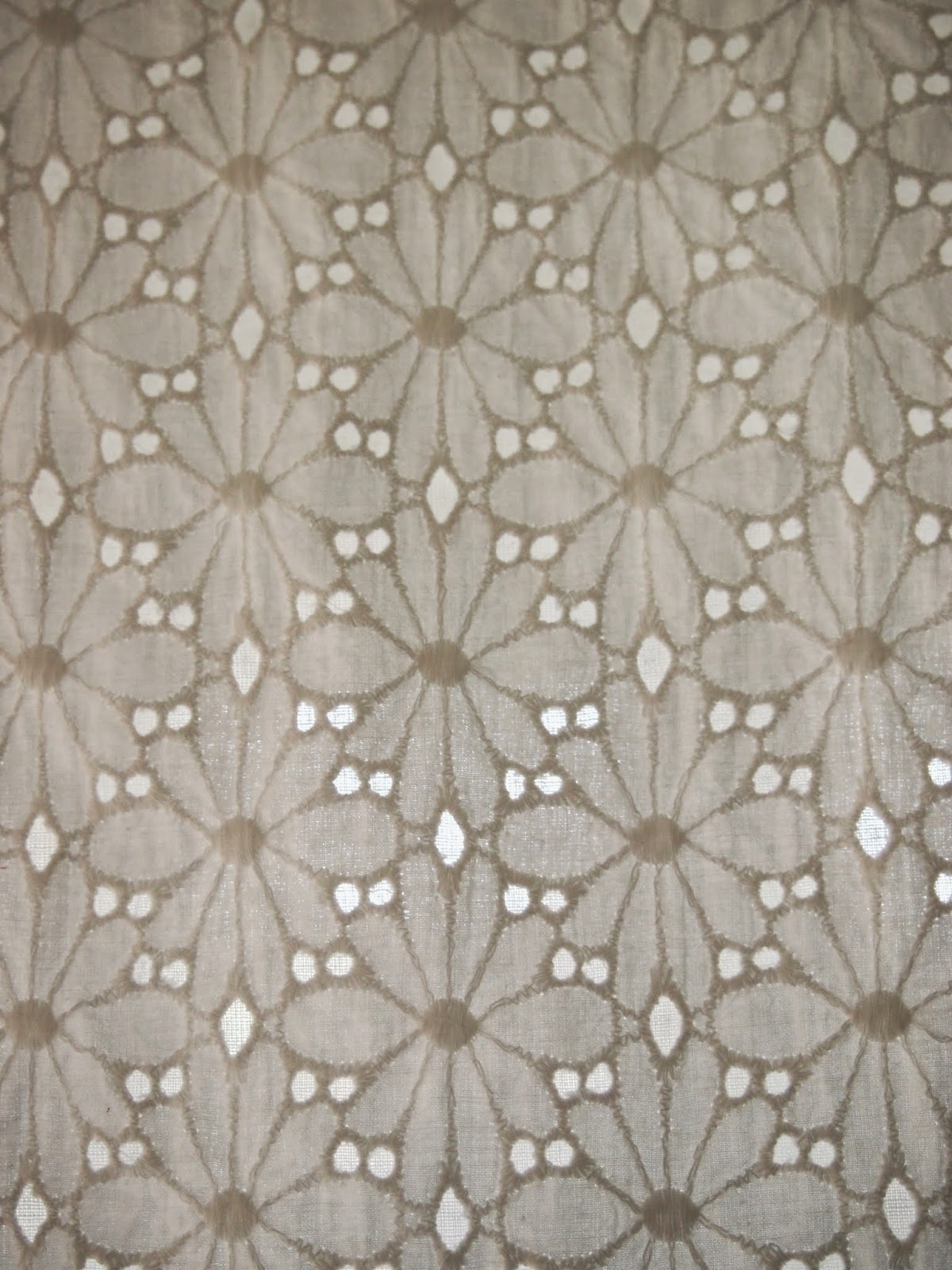 This is a close-up of the material - something like that really shouldn't be left unloved in a wardrobe should it? Then the Belcarra came along, and I thought it would be a perfect match given that the pattern doesn't have any darts or anything to break up the material. The only problem? It turned out the skirt of the dress was a good few inches shorter than the Belcarra pattern pieces (this possibly gives you an idea of quite how short the dress was!). I considered shortening the Belcarra, but when I measured my RTW top it was exactly the same length as the finished measurements for the Belcarra, and I knew I didn't want it shorter. By now though, I had my heart set on using this material, so I came up with the idea of making the arms and top of the front/back pieces from some plain white cotton and using the eyelet material for the rest of the front and back. Problem solved! 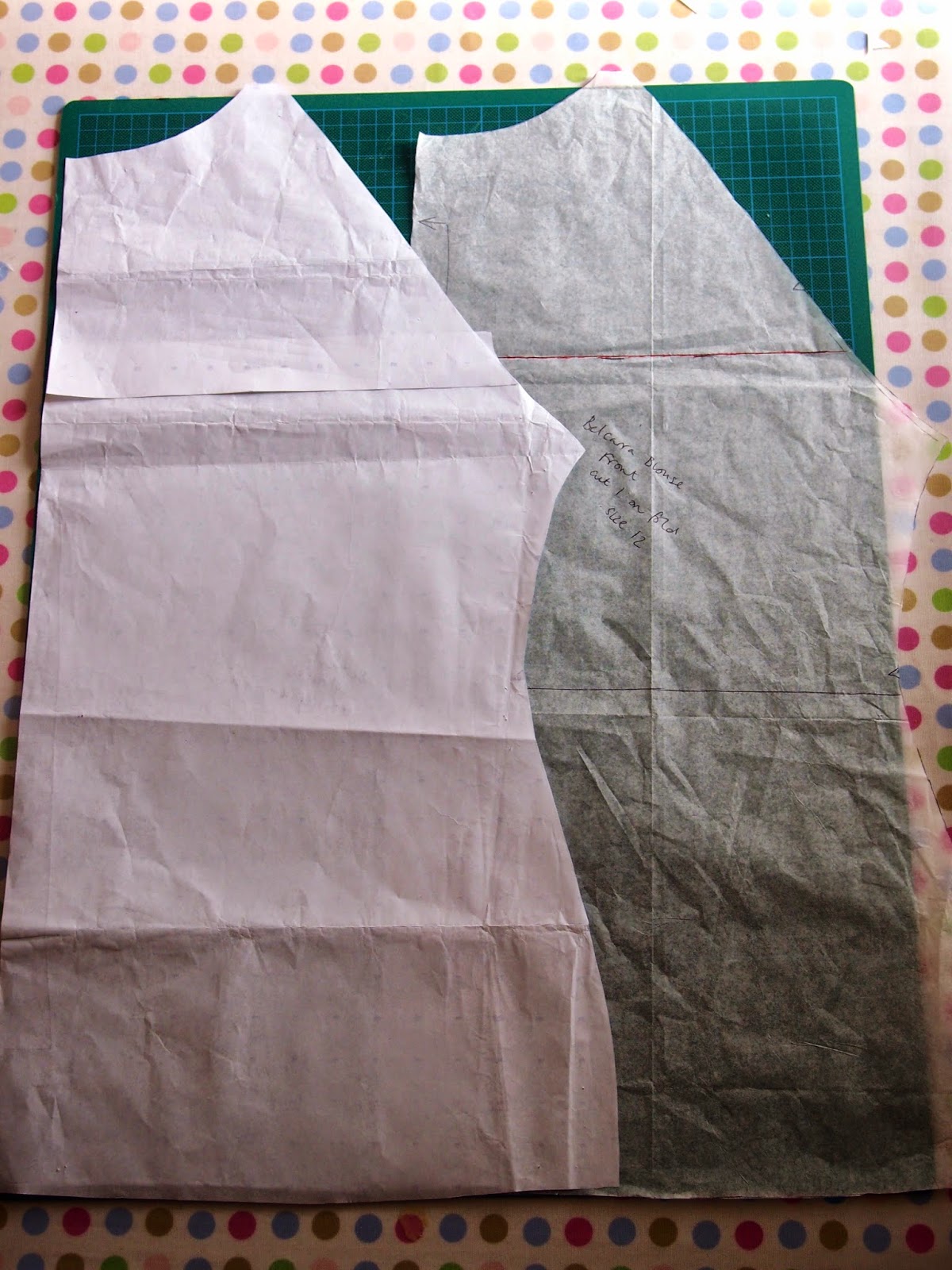 I made a quick muslin and measured where I wanted the join between the two materials to be (in my case 17 inches up from the bottom), marked a line across the front and back sections at that point (the red line on the front section shown on the right above), then used that to cut two new pieces for both the front and back with an extra 5/8" added to each piece for the seam allowance - hopefully you can see where my two new front pieces cross over on the photo above.

Once I'd cut out all my pieces, I underlined the eyelet material using the lining of the original dress (a very lightweight cotton), basting the two materials together within the seam allowance and then treating them as one piece of material. I then joined the top and bottom sections of the front together, and did the same for the back, and from then on I followed the original instructions for view A (the plainest version; view B has tucks on the sleeves, and view C has different cuffs and a patch pocket). 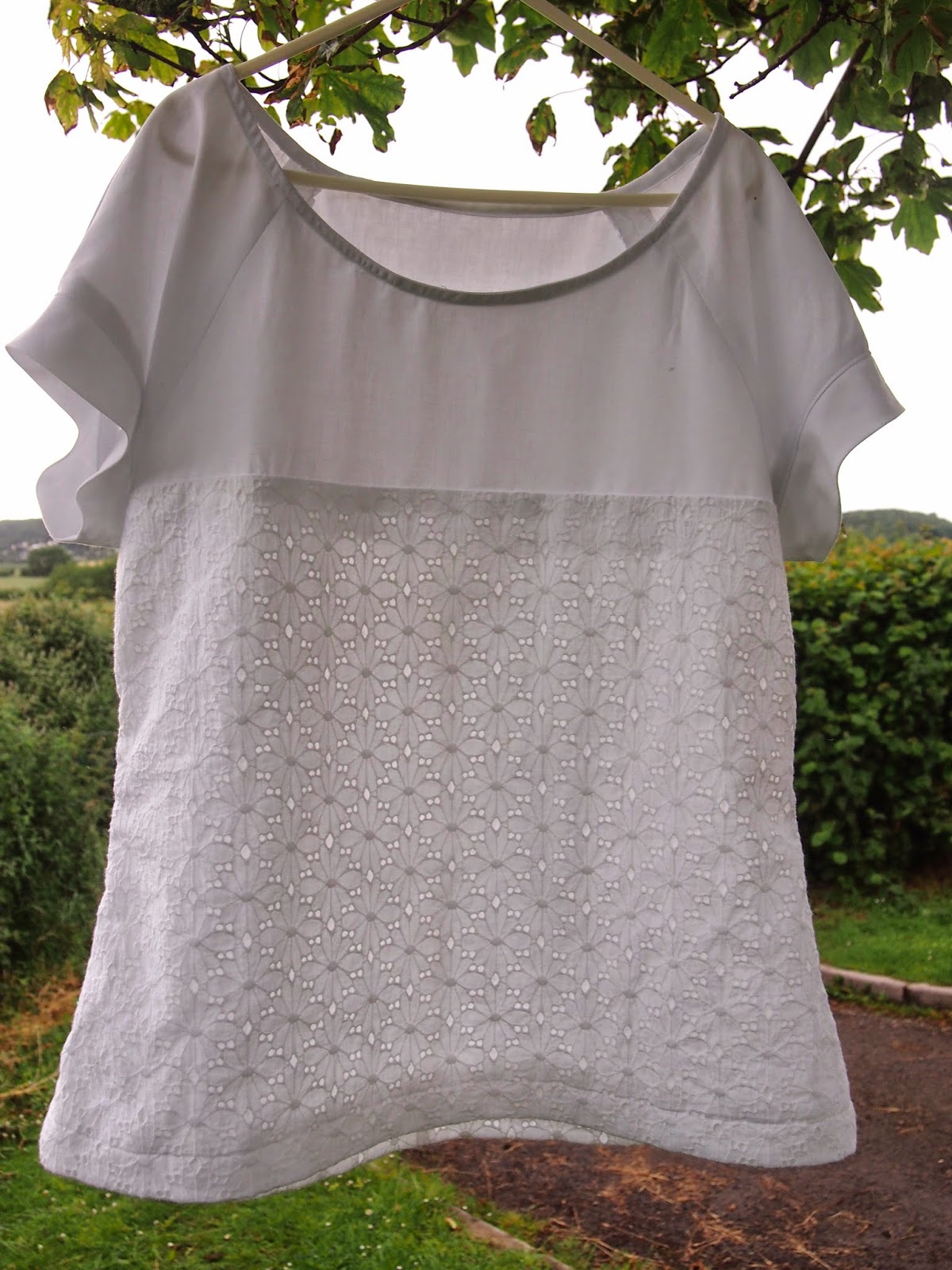 Don't worry, I don't make a habit of hanging my clothes in random trees (especially not after the odd looks I got from a passerby when I was taking this photo! The things we do in the name of blogging!), but it seemed like a good way of making the pattern stand out more - getting detail to show up properly in the photos when I was wearing the top wasn't easy! 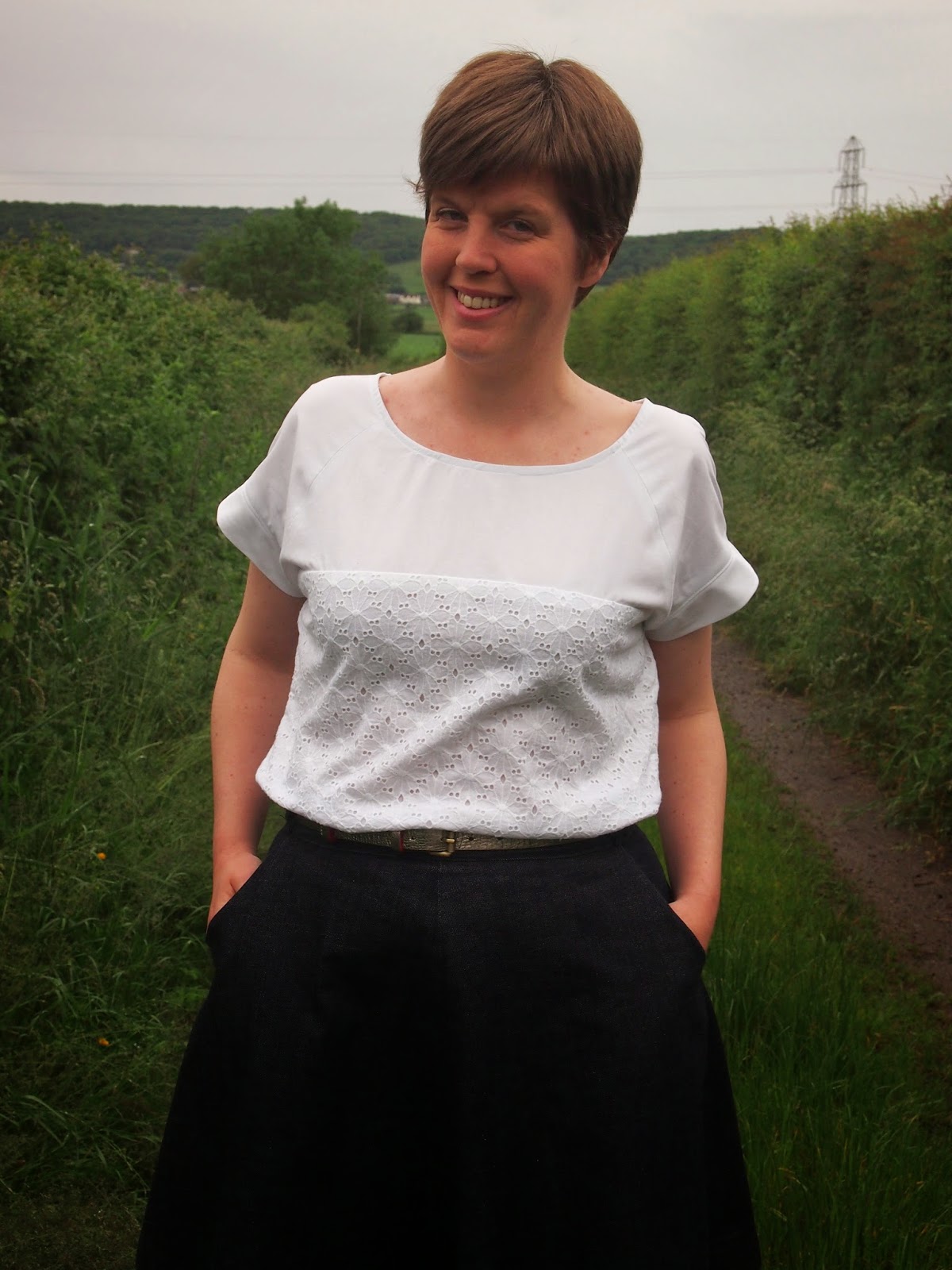 So, onto the Belcarra itself! This is a really great, simple pattern and doesn't eat up too much fabric. As I mentioned above, it doesn't have any darts which means it's a super speedy project if you've got a bit of experience - I had mine finished in an evening, including the time messing about with cutting my different sections. Obviously it would also be great for beginners, or for trying out new materials. I haven't sewed using silk yet so maybe I'll have to try that and make myself a more fancy Belcarra.

The fact that there's no darts does mean that you need a light weight material with a nice drape to avoid it looking too boxy. My white cotton I used for the sleeves/yoke is leaning more towards medium weight, but the eyelet is still pretty light weight even when underlined so I think I just about get away with it! 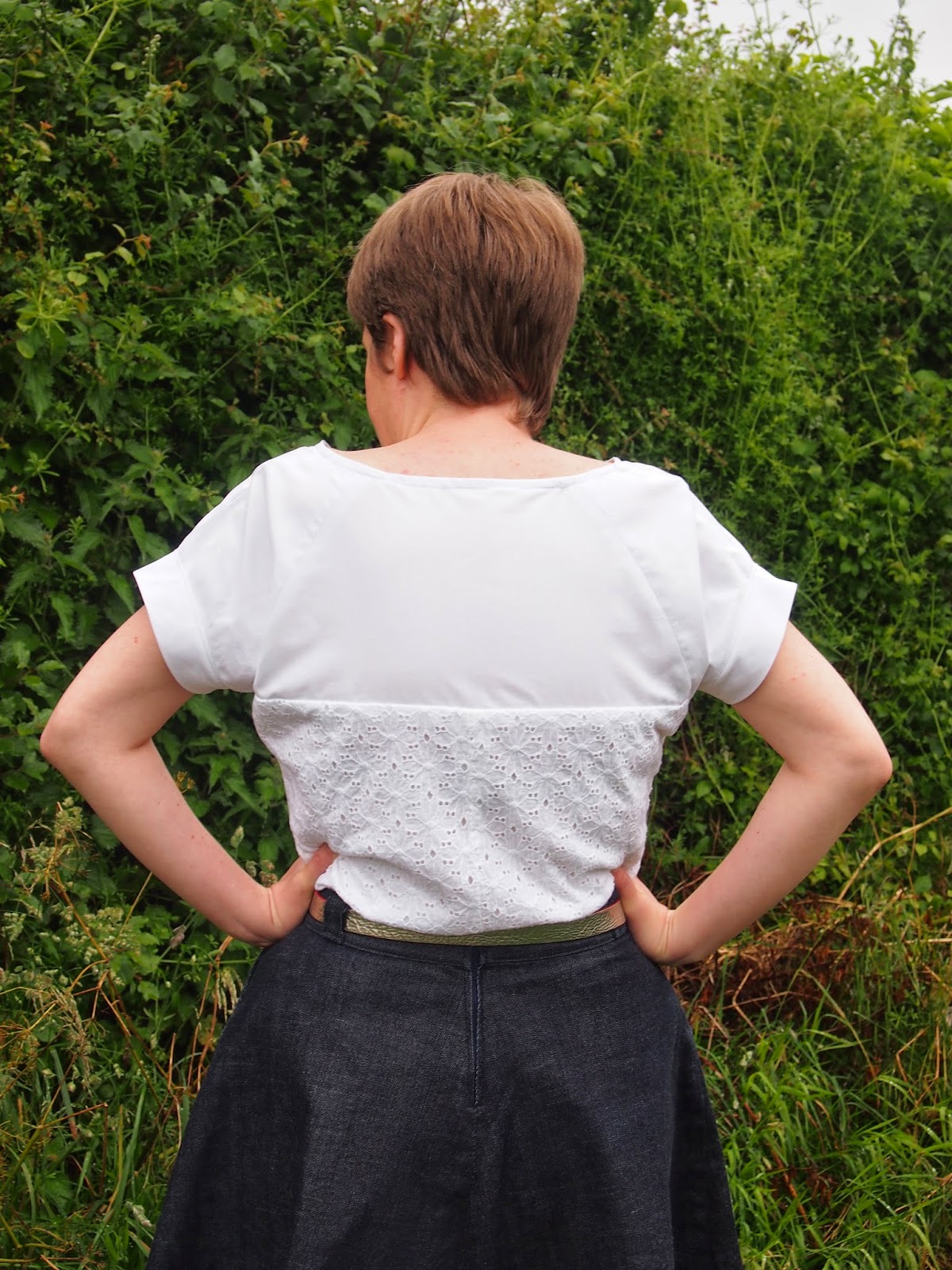 I cut a straight size 12 and didn't need to make any alterations to the fit - after all I am definitely pear-shaped so pretty much Sewaholic's target audience! It's quite a relaxed style though, so I think in general it's not going to cause as many fitting issues as more structured or closely fitting garments.

It's really comfy and easy to wear, but I think it looks a bit more dressed up and put together than an ordinary t-shirt. It also looks great either tucked into a skirt or untucked with trousers - I'm wearing mine here with my denim Hollyburn skirt and the only pair of trousers I own that can be worn outside of the house (I pretty much don't wear trousers, but it's nice to know I now have a new top for the odd occasions when I do!). 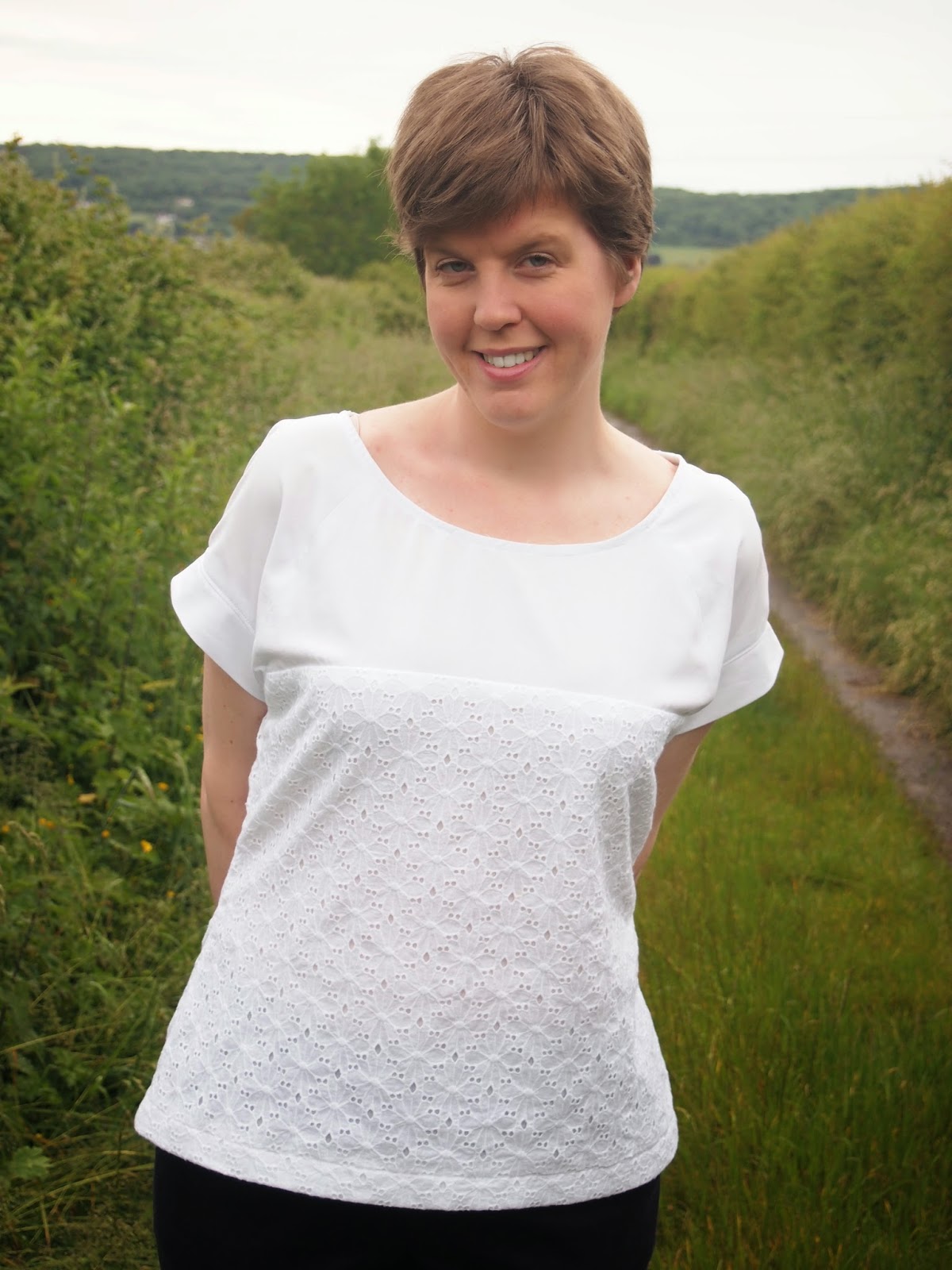 All in all, another successful creation as far as I'm concerned. Like the other Sewaholic patterns I've used, this came together really easily and the instructions were great. Version 2 is already cut out and waiting to be sewn up, and I'll definitely wear this top much more that I would have worn it as a dress! What does everyone else think of the Belcarra? And has anyone else had any refashioning successes lately?
Posted by Ruth - Nightingale and Dolittle at 08:57