On a recent charity shop trip I acquired a nice tall vase. So tall, in fact, that it won't fit in any of my cupboards meaning it has since been sitting somewhat forlornly in my living room crying out to be filled with something pretty. Obviously there are lovely flowers that I could buy, but this vase really needs the tall, dramatic type flowers that always cost that bit more than I would like to spend on something that's going to have wilted and need to be replaced within a week. So I set about trying to find some nice artificial ones, failed, and came to the conclusion that the best thing would be to make some "flowers" instead. A quick browse of Pinterest later, and pom pom flowers seemed to be the answer - simple, colourful, a bit quirky and cheap being as I have quite a bit of wool left over from various projects.

There are plenty of versions out there (this one and this one were the main ones that inspired me), but here's my interpretation... 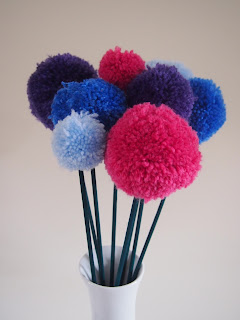 As you can probably tell they're really simple - just make your pom poms in whatever shapes and colours you like using your preferred pom pom making method (I might have to try out a Clover pom pom maker at some point, but this time I used the old-fashioned method of wrapping wool round 2 pieces of card), get some appropriate lengths of garden cane, put a little bit of glue (I used my hot glue gun) on the end and hold the pom pom onto the end of the cane for a couple of minutes to make sure it sticks... 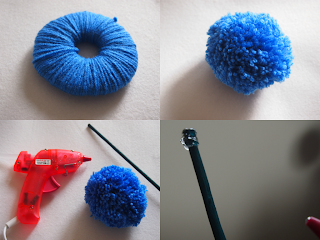 That's all it takes! 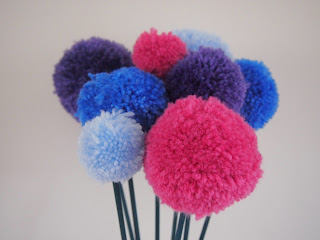 Here's my "bouquet" and the no-longer-forlorn vase in all their glory... 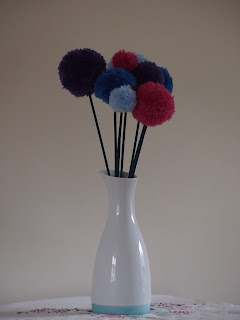 Simple but effective I think! I might have to make some others in different colours and alternate them, but I've got a couple more projects in the pipeline that need to be finished before I get round to that - watch this space!

Posted by Ruth - Nightingale and Dolittle at 13:32